Global Financing Facility and a new era for development finance 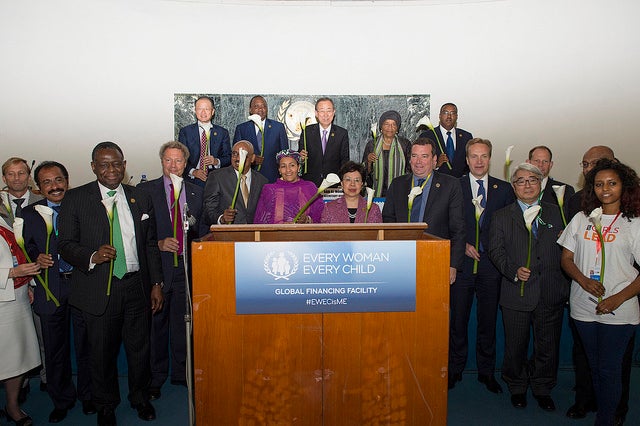 This week at the Third International Financing for Development Conference in Addis Ababa, we’ve seen the birth of a new era in global health financing.

The World Bank Group, together with our partners in the United Nations, Canada, Norway, and the United States, just launched the Global Financing Facility in support of Every Woman Every Child.  It’s hard to believe it’s been less than 10 months since the GFF was first announced at the 2014 UN General Assembly by World Bank Group President Jim Yong Kim, UN Secretary-General Ban Ki-moon, Prime Minister Stephen Harper of Canada and Prime Minister Erna Solberg of Norway.  We’re grateful to the hundreds of representatives from developing countries, UN agencies, bilateral and multilateral development partners, civil society and the private sector who have contributed their time, ideas, and expertise to inform and shape the design of the GFF to get it ready to become operational.


The GFF is already at work in the four frontrunner countries of the Democratic Republic of Congo, Ethiopia, Kenya and Tanzania, and we’ve just announced eight more countries who will join: Bangladesh, Cameroon, India, Liberia, Mozambique, Nigeria, Senegal and Uganda.

By blending domestic and international, public and private resources, aligned behind country-led plans, the GFF represents a very different way to grow development finance. This is exactly what we’ll need to reach the goals to end preventable maternal and child deaths by 2030 and achieve universal health coverage.

Let’s reflect on where we were just over 15 years ago.  In the late 1990s, with some 30 million children around the world not immunized, a small group of visionaries started to dare to think differently about how to tackle the challenge.  At that time, there existed in Geneva a modest global partnership for child immunization, with less than $10 million in funding.  At a meeting in Bellagio to re-think the status quo,  the Rotary Foundation, which had long been playing a leading role in child health, challenged the conventional thinking and proposed that we needed to go from millions to billions of dollars in order to expand access to routine child vaccines and immunizations.  Many thought that was delusional.  But within a matter of months, the world had its first billion dollar global health fund: the Global Alliance for Vaccines and Immunizations (now Gavi).

Soon after that, with the AIDS pandemic raging, another group of out-of-the box thinkers approached the Gavi board to suggest that the world also needed a fund to tackle the three infectious diseases of AIDS, tuberculosis and malaria.  That idea also was dismissed by naysayers.  But the visionaries prevailed, and at the G7 Okinawa Summit in 2000, the idea of the Global Fund for AIDS, Tuberculosis and Malaria was born. A couple of years later, the Global Fund also became a billion dollar-plus fund. Then, in 2003, US President George W. Bush created the President’s Emergency Plan for Emergency AIDS Relief, an unprecedented $15 billion fund.

I affectionately call these funds the billion dollar babies.  Their establishment has done a massive human good, saving millions of lives and creating hope and opportunity.

But now these billion dollar babies are in their teens.  As these funds mature in their second decade, developing countries’ economies are growing, so is their health sector spending – and their burdens of disease are changing as well.   So the big question looking forward to 2030 is: How do we harness developing countries’ growth to mobilize additional domestic resources for health, in order to achieve sustained access to health for all?

A major paradigm shift is permeating the conversations in Addis: The majority financier in health is becoming – or in most cases already is – countries themselves.  In order to protect and sustain the progress we’ve made so far in advancing global health, we need to embrace this shift – or risk seeing funding for essential services decline as countries graduate from grant-based ODA.  But this is now a trillion, not just a billion, dollar challenge.

As highlighted in a terrific report by RESULTS UK on domestic resource mobilization in Kenya , countries need to unlock more domestic resources for health equity through avenues such as improving tax collection, imposing sin taxes, and creating sovereign wealth funds.

With more emphasis on domestic resources, the role of official development assistance should become more catalytic and target the gaps.  Contributions from Canada, Norway, the United States, Japan, and the Bill and Melinda Gates Foundation have been critical so far in moving the GFF forward.

We also have to do much more to unlock resources from the private sector.  The public sector stewardship role is paramount, but the reality is that health systems in most countries are pluralistic in terms of service delivery and financing, and most countries won’t reach universal access through a public-sector-only approach.  One way the GFF aims to bring in new private sector capital is through a partnership with our International Bank for Reconstruction and Development (IBRD) to raise funds from capital markets that can be used, for example, to strengthen frontline health systems and scaling-up of community health workers, and another that focuses on the control of malaria to reduce child mortality.


Smart, scaled and sustainable financing – that is the promise of the GFF.  It’s about reaching the people who are unserved, and providing the dignified care and access that every mother, every child, every citizen deserves.   Please join us!

This post first appeared on the Finance for Development blog.

Video: A New Era for Every Woman, Every Child

Commentary: The Lancet: The Global Financing Facility: country investments for every woman, adolescent, and child