It Takes A Village: Peer Support for Breastfeeding Helps Ensure A Healthy Start 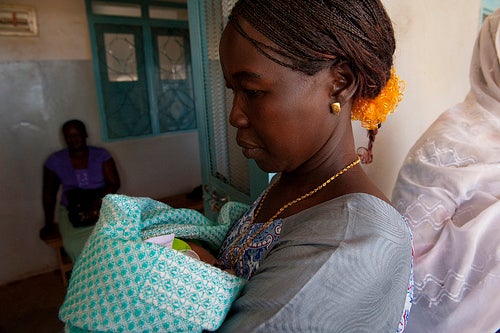 New York Times columnist Nick Kristof, in a recent piece titled “A Free Miracle Food!”,  wrote: “…if we want to save hundreds of thousands of lives, maybe a step forward is to offer more support to moms in poor counties trying to nurse their babies.  Nursing a baby might seem instinctive, but plenty goes wrong. In some parts of the world, a problem has been predatory marketing by formula manufacturers, but, in the poorest countries, the main concern is that moms delay breast-feeding for a day or two after birth and then give babies water or food in the first six months.


Mr. Kristof is right.  Breastfeeding doesn’t happen automatically and it isn’t always easy or intuitive. Both mother and baby are learning new skills and behaviors, and there are often challenges to overcome, ranging from physical, such as a poor infant suck reflex or breast infections, to cultural, including dangerous traditions such as feeding newborns honey and teas instead of colostrum.  But as a recent  series on nutrition in The Lancet underscored, the risks of not breastfeeding are well documented and compelling.

Part of the answer to successful initiation followed by  sustained breastfeeding is peer support.  It really does take a village to raise a healthy child.  This year’s theme for World Breastfeeding Week (August 1-7), “Breastfeeding Support: Close to Mothers,” highlights the critically important role of peers and community support contacts for mothers and families.  These peer supporters encourage mothers to begin breastfeeding within the first hour of birth and to continue  breastfeeding even when discomfort, embarrassment, advice from family elders or early return to employment makes the practice difficult.They also provide solutions to breastfeeding problems for either mother or baby when they arise.

Is there solid evidence for the impact of peer support on breastfeeding?  A systematic review of randomized or quasi-randomized controlled trials comparing extra support for breastfeeding mothers with usual maternity care was published by The Cochrane Collaboration in 2007.  The review looked at the impact of support for breastfeeding mothers either from professionals, or from trained lay people, or both.  The analysis of 34 studies, from 14 countries, including almost 30,000 women, found that both professional and lay support was effective in areas where optimal breastfeeding practices, such as early initiation and exclusive breastfeeding for six months, is low.

World Bank-supported health and nutrition projects focus on promotion and support to breastfeeding mothers using a variety of delivery channels including community health workers and peer support groups.  The South Asia Region Development Marketplace for Family and Community Approaches to Improve Infant and Young Child Nutrition (2009) funded innovations to improve the impact/quality of breastfeeding support in the region.

Think about ways to support breastfeeding mothers in your own families and communities this week as we celebrate the “free miracle food” that can save lives and insure a healthy start for every child.