In Liberia, providing comfort for kids in the aftermath of the Ebola crisis 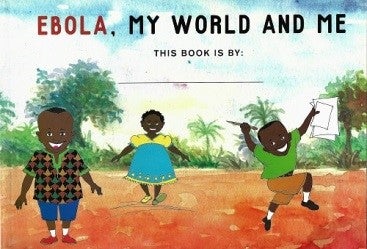 The Ebola Virus Disease (EVD) crisis ended more than a year ago in Liberia. It resulted in over 10,000 cases and 5,000 deaths. For many children, the crisis continues through intrusive memories of illness, isolation, and death. These memories are particularly acute for the children directly affected by Ebola; those that were quarantined, separated from family during treatment, or orphaned. The Liberia Ministry of Health (MOH) identified 3,091 such children, and a World Bank working paper calculated that approximately 4,200 Liberian children lost one or both parents to Ebola.

Protective factors, such as a nurturing family life, dependable relationships, school attendance, and a stable political environment, can mitigate the negative psychological effects of a crisis, like Ebola. During the crisis, many of these protective factors were destroyed, leaving children vulnerable to experiencing further trauma. Left unaddressed, trauma can hinder children’s academic achievement, and can increase their risk of compromised mental health later in life. Both of these consequences are known risk factors for poverty.

Recognizing the importance of addressing children’s trauma, the Ebola Recovery and Restoration Trust Fund (EERTF) funded the implementation of a Comfort for Kids (C4K) program. The C4K program encourages psychological healing, and promotes resilience in children who have experienced a crisis or disaster. It was developed in the wake of September 11, 2001 by Mercy Corps, an international non-governmental organization, and has since been implemented following natural disasters in Haiti, China, and Japan; and in post-conflict and refugee settings in Gaza, Jordan, and Lebanon.

C4K primarily centers on the “My Story” workbook and associated classroom activities, which provide children with the opportunity to express their emotions about their experiences through drawing, writing, and facilitated discussion. C4K also provides capacity building for parents, teachers, and other caretakers on how to identify and more effectively respond to children’s trauma responses.

The C4K program in Liberia was implemented between January 2015 and December 2016 in 15 townships in Montserrado county. Approximately 10,000 children between the ages of six and 13 in 94 schools received “My Ebola Story” workbooks and participated in associated classroom activities, which were facilitated by 753 C4K-trained teachers. The workbooks were adapted to the Liberian context by local illustrators, who worked with C4K staff to ensure that they were age and content appropriate.

Teachers were enthusiastic about the program because they saw positive changes in their students’ behavior and mood. Students, they said, were more engaged and less despondent in class. Several teachers mentioned that the C4K program had prompted them to learn more about how to help children process their trauma. Also, to strengthen family bonds, and thereby increase children’s sense of security, teachers encouraged their students to share the workbooks with their parents. Program staff trained 612 parents on how to detect and respond to their children’s trauma reactions, and built the capacity of 280 health providers and 150 local leaders to further support the children’s recovery at the community level.

While implementing the “My Ebola Story” workbook and activities, teachers noticed that certain students were at high-risk for developing behavioral and emotional problems. C4K staff subsequently implemented a psychoeducation intervention targeted to 1,086 high-risk children and their families, and established a referral pathway to a Médecin Sans Frontières clinic for children in need of more intensive mental health services.

Time constraints did not allow for a randomized evaluation of the C4K program. However, pre- and post-test evaluation results show that the C4K program was successful in improving the psychosocial health and well-being of Ebola-affected children and in increasing community support for them. Prior to receiving the C4K workbook and participating in the associated activities, only 37 percent of children showed acceptable levels of psychosocial wellbeing; after participation, nearly 92 percent did.

These results, however, do not capture the complete story. Project stakeholders, including representatives from the Ministries of Health and Education (MOH and MOE), health providers, school principals, community and religious leaders, and members of parent-teacher associations have expressed overwhelming support for the program and a desire for its countrywide scale-up. While direct program expansion is severely constrained by a lack of resources, C4K staff and other development partners are now working with the MOH’s mental health division and the MOE’s teacher training, early childhood education, and psychosocial divisions to develop school-based mental health programs.

The C4K program was a small intervention. It was, however, an important first step to rebuilding the protective factors that can help Ebola-affected children to overcoming their trauma. These children are Liberia’s future. Ensuring that they are psychologically healthy will contribute to Liberia’s continued development.