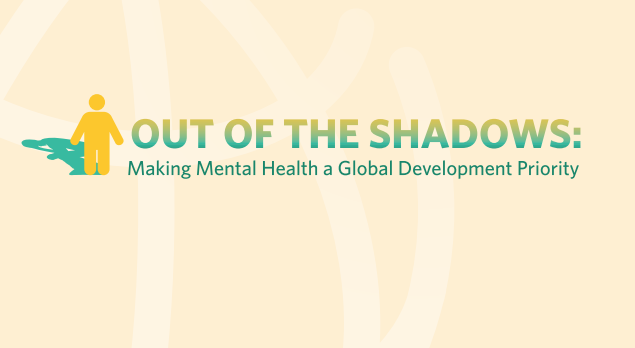 Accumulated scientific evidence shows that proper nutrition and stimulation in utero and during early childhood benefit physical and mental well-being later in life and contribute to the development of children’s cognitive and socioemotional skills.  Yet, a critical but often overlooked fact in policy design and program development across the world is the association between maternal depression and childhood stunting -- the impaired growth and development measured by low height-for-age.

The human, social and economic toll imposed by lack of attention to mental illness and substance use disorders across the world is enormous.  It is estimated that at least 10% of the world’s population is affected and that 20% of children and adolescents suffer from some type of mental disorder. In fact, according to WHO data, mental illness account for 30% of non-fatal disease burden worldwide and 10% of overall disease burden, including death and disability.  Recent estimates indicate that about 23% of 667 million children under the age of 5 worldwide are stunted, and an estimated 45% of deaths of children under age 5 are linked to malnutrition.

Depressive disorders during pregnancy and the post-natal period are common in both developed and developing countries, impacting negatively both mothers and children.  And in some countries, suicide (which is frequently caused by mental disorders) is a leading cause of death among women aged 15 to 49.  Diverse factors, including poverty, gender discrimination, marital conflict, domestic violence, crime, post-traumatic stress, substance use disorders, and lack of control over economic resources, contribute to the onset of mental illness, which can cause functional impairment at a time when the mother is performing tasks vital to an infant’s growth and development.  Research suggests that maternal depression is associated with compromised parenting behavior, nonresponsive caregiving practices, and a lower likelihood or shorter duration of breastfeeding.

Data from different countries show that unattended maternal mental illness has a negative impact on infant and young child growth, development and care, having serious health implications in terms of physical, cognitive and emotional well-being during crucial stages of the life span, such as the first 1000 days and early childhood.  For example, a study in Northern Ghana found that children of depressed mothers are more likely to be stunted compared to children of non-depressed mothers.  A recent study in Mexico estimated the prevalence of depression among mothers at 21.4%, with a negative impact on children at different socioeconomic groups.  In low-income households, depression was associated with higher risk of never being breastfed, health problems, acute respiratory disease, injuries requiring child hospitalization, and moderate or severe food insecurity, while in medium- or high-socioeconomic households, depression was associated with higher risk of never attending a developmental check-up, and moderate or severe food insecurity.

The risk for emotional and behavioral problems is also known to be high among children of depressed mothers. A comprehensive literature set documenting the effects of maternal depression on both the psychological and physical development of children, evidence that children who experience maternal depression early in life may experience lasting effects on their brain architecture and persistent disruptions of their stress response systems, with implications for their ability to learn as well as for their own later physical and mental health.

These findings suggest that prevention of maternal depression could lead to reduction of negative childhood health and development outcomes.

Since some of the benefits from improved human capital accrue beyond the generation in which the investments are made, we feel that it is imperative that a concerted, multisectoral response be supported, not only to raise public awareness and political commitment about mental health as an often overlooked and stigmatized issue, but also to support the integration of mental health and psychosocial support services as part of reproductive and child health services and early childhood programs, benefiting both mothers and children.  Interventions could include routine screening for and early treatment of prenatal and postnatal depression, and psychotherapy for groups to improve adoption of nutrition-related behaviors to reduce stunting.

We also feel that this proposition is doable and highly cost-effective. A study prepared for the 2016 WBG/WHO global mental health conference showed that the returns on investment in mental health treatment at the community level can be substantial with benefit-to-cost ratios ranging between 2.3-3.0 to 1 when economic benefits are considered and 3.3-5.7 to 1 when social returns are included.

In addition, recent studies indicate that mental illness can be affordably treated in developing countries. Varied interventions, such as health care and social support, group therapy or home visits, which are often delivered by lay community workers and auxiliary personnel at primary care settings and at the community level, have led to a demonstrated reduction in maternal depressive symptoms in a diverse range of countries, including China, Brazil, Jamaica, Pakistan, Peru, South Africa and Uganda.

We feel, therefore, that to transform lives and communities, it is imperative that country governments with the support of the international community fund the sustainable scale up of mental health prevention and treatment as part of integrated health and social services delivery platforms, including humanitarian and development programs for addressing the needs of displaced people and refugees. If this is done, not only mothers’ well-being and children’s healthy development would be promoted, but society at large stands to reap the benefits of closing the human capital gap, enhancing a country’s productivity and competitiveness, and the resulting future prosperity of countries.

Related:
Mental health in transition : assessment and guidance for strengthening integration of mental health into primary health care and community-based service platforms in Ukraine
Mental health among displaced people and refugees : making the case for action under humanitarian response and development programs This is a most important public health topic with significant educational, economic and policy implications.
We addressed it in our most recent congress, www.perinatal2018international.org. We also started a proof of concept pilot project focused on perinatal depression screening of mothers, analysis of mother's breastmilk composition, and impact on infants development, behavior and wellbeing. If there are WBG colleagues interested and/or working in this area would be keen to connect with them and explore possible collaboratives. Look forward to it.

Very interesting post, that focus on an important mental problem that affects patient's family, and specially the growing children in a very important age period.
It could be interesting to remember here that when antidepressants are used, these medicines potentially have some adverse effects on children through breastfeeding (for example: https://www.ncbi.nlm.nih.gov/pmc/articles/PMC3681447/). This can be another reason to strenghten preventive measures and also interventions such as therapy groups intead of prescribing an antidepressant (when possible).

Compelling evidence of the need for action is summarised clearly. A new partnership between the World Psychiatric Association and citiesRISE aims to contribute with other organisations to support for the mental health needs of young women and young men in adversity, with a focus on improving perinatal mental health and the health of children and families.

Thanks so much for the interesting post. Seems both feasible and impactful to insert mental health-relevant topics and referrals into parent education and information programs/campaigns.