Next time it could be you: Why we should all care about International School Meals Day 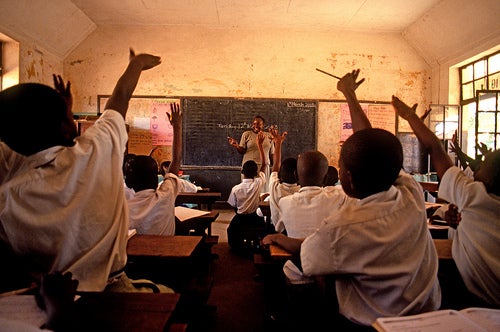 Why am I blogging about this topic from a rich country?  To understand this, we need to go back to 2008 when the global financial crisis kicked off with major spikes in food prices, and the specter of hunger loomed over the low-income world.  The World Bank responded by establishing a crisis response fund to stimulate food availability. To the surprise of some, many low-income countries did not seek support for agricultural investments but instead sought to initiate or expand their national school feeding programs.

Analysis  prompted by this observation showed that low-income countries often viewed the provision of school meals as a key social safety net to support its poorest populations. Indeed, a recent survey by the World Food Programme of 77 low income countries reveals that nearly 70% of countries started a school meals program as a direct response to a social shock.  This was a surprise to many who had viewed school meals as primarily a nutritionor education intervention: to improve nutritional outcomes or keep children in schools.

These kinds of programs can contribute to both of those objectives, but when my colleague Harold Alderman and I reviewed the field in 2012 we found that, on the balance of evidence, the primary objective was to provide social protection for the most vulnerable and hard to reach. It is this philosophy that led the Brazil and Mexico governments, for example, to ensure that their demonstrably effective conditional cash transfer programs were underpinned by school meals programs that provided a reliable and accessible safety net for even the unregistered poor.

The social protection dimension of school meal programs has historically held relevance in many rich countries as well.  Britain launched welfare reforms at the turn of the 20th century with the “Education (Provision of Meals)” Act of 1906, when Parliament required the provision of school meals in targeted poor communities with the intention of spreading a safety net and boosting school attendance.

The earliest universal school meal programs were introduced decades later when countries began to emerge from the devastation of the Second World War.  Japan enacted the prosaically but precisely named “School Lunch Law” in 1954, and Finland later followed suit, in 1957,when every child became entitled to a “sufficient school meal” on every school day.  Both countries were emerging from the legacy of conflict, and in both cases social protection was the primary motivation for these national, universal access programs.  Interestingly, the Japan program required parents to contribute while the Finland program did not, yet both have proved successful.

In the 21st century, as the social consequences of the global financial crisis affect the populations of high-income countries, these countries are again turning to school feeding programs as a social response.  The Secretary for Education in Portugal has recounted reports from teachers who say that, in the worst affected communities, there are always clean plates at lunch on Mondays, suggesting that some families go hungry over the weekend.

In Spain, where there has been at least one protest march in support of school feeding, the Ministry of Education reports that families can no longer afford even the highly subsidized, low-cost lunches for which some 16% of children were eligible.   In Greece, one of the countries most affected by the financial crisis, 10% of school children are estimated to live in food-insecure families, and UNICEF estimates that more than one-quarter of families with children have an “economically weak diet.”

In response, Greek philanthropies and government programs are providing school food, including take-home rations in targeted areas. Spain is offering free, rather than subsidized, lunches to the 12,000 children eligible previously for low-cost meals, and worst affected municipalities in Portugal are continuing school feeding through the school holidays.

In Scotland, expansion of provision of school meals has already increased coverage from 53% to 75% of children in the first three years of school,and a national target states that all of these children will have the option of a free meal by Jan 2015.

In England, the intention is to modify the Children and Families Bill to place a legal duty on primary schools to offer free lunch to every child in the first two years of school by September 2014. The U.S. has also responded to the financial crisis by increasing access to school meals, with the number of children eligible increasing automatically as more children met the qualifying criteria.According to the USDA, in 2007 just over 59% of publicly provided school meals were served to children who met the eligibility criteria for free or reduced price meals.By 2013, the proportion had increased to 70.5%.

This year’s International School Meals Day aims to bring greater attention to the relationship between nutrition and learning. The 2013 World Food Programme publication,The State of School Feeding Worldwide, estimates that 368 million children receive a meal every day they are in school, supported by a global investment in excess of US$50 billion.

This is a substantial enterprise by any measure, but people and their governments in both rich and poor countries are now questioning whether it is enough. And if rich countries are now recognizing the value of school feeding for the poor, are they doing enough to help those living in extreme poverty in low income countries? Thank you for this very interesting post that reinforces the universality of school meals. Not only do almost all countries in the world seek to provide them, but a key motivating factor for low-, middle-, and high income countries alike is social protection for the vulnerable and food insecure. It would be interesting to look into how program design and targeting varies across countries to allow for school feeding to serve this social protection purpose in terms of scaling up.