Putting an end to childhood malnutrition 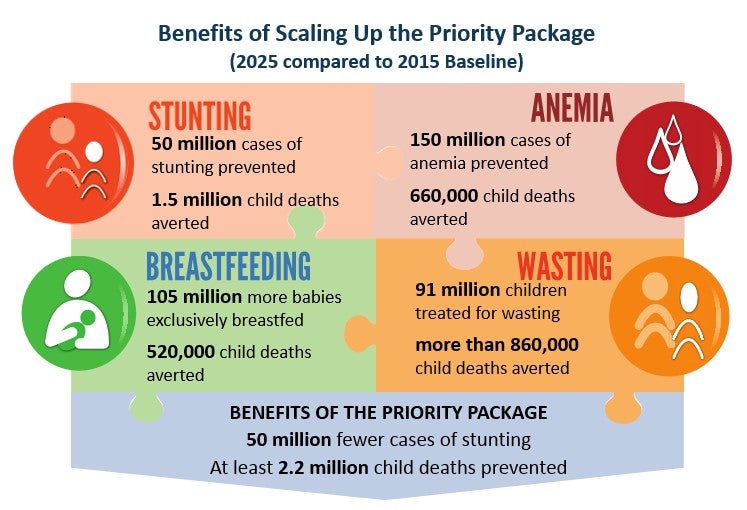 ‘Stunted children today means stunted economies tomorrow.’ This sentiment, recently expressed by African Development Bank President Akin Adesina, encapsulates the sea change in how malnutrition is now viewed by global actors. Mr. Adesina was speaking at an event to launch a new global investment framework called Investing in Nutrition, co-authored by the World Bank and Results for Development Institute, which firmly establishes the importance of nutrition as a foundational part of development.

The cost of inaction on malnutrition is immense. Every year, almost half of child deaths under age five are attributable to undernutrition. One quarter of all children around the world – 159 million - are stunted.  This means that their bodies and brains have not grown to their full potential.  This puts them at a major disadvantage in learning and acquiring life skills before they even set foot in school.  This unequal start compromises their future earnings, contributing to a life of insurmountable inequality. And poor nutrition is not just an issue for the poorest countries.  Middle income countries like Guatemala, Indonesia, Nigeria and India, for example, also have high rates of chronic malnutrition, including stunting.

Despite this alarming situation, we have seen decades of underinvestment in nutrition. Developing countries on average devote just one half of one percent of their health budgets to nutrition. Less than one percent of Official Development Assistance (ODA) goes to nutrition. This is self-defeating, and the new investment framework seeks to change this picture.

The science is now indisputable on investing in the first 1000 days of a baby’s life, from pre-pregnancy to a child’s second birthday.  “If I had to pick one investment that I could make that would be the most impactful, that would be nutrition,” said Bill Gates, the keynote speaker at the launch event. That’s because investments in early nutrition are not just crucial, they are also irrevocable, with benefits that last a lifetime. We have strong evidence to show that better early nutrition for children results in higher earnings later in life and contributes to overall economic growth.

We know that this is a problem that can be solved. Ariela Luna, Peru’s Deputy Minister of Political and Social Assessment, spoke eloquently about the need to “make nutrition a national priority and put it above party politics.” Political commitment at the highest level, the right resources and the right interventions have been key to the success of countries like Peru, which has reduced rates of stunting by half over just seven years. Senegal, for example, has brought its childhood stunting rates down from 30 percent in 2000 to about 19 percent today, the lowest rates in Sub Saharan Africa.

In 2012, the World Health Assembly adopted six global targets for nutrition: for stunting, breastfeeding, anemia, wasting, low birthweight and overweight. The Investing in Nutrition report focuses on the first four, where evidence is the strongest, and maps out not only how much investment would be needed across all Lower Middle Income Countries (LMICs) to attain these targets, but also where those resources could come from.  By mobilizing an additional $2.2 billion a year for ten years towards nutrition, a package of the most cost-effective and scalable ‘priority interventions’, could be implemented immediately, according to this new analysis. This would result in 2.2 million fewer child deaths and 50 million fewer stunted children by 2025.  This priority package includes measures like Vitamin A supplementation, improved infant and young child nutrition and antenatal micronutrient supplementation during pregnancy.

The report also finds that for a more ambitious investment of $7 billion annually, the four costed targets could be fully achieved, with 3.7 million fewer child deaths and 65 million fewer stunted children by 2025.  Stunting is the biggest driver on both the health and economic sides of this equation. Moving the needle on that is crucial and would bring an enormous payoff in terms of lives transformed and countries’ increased economic competitiveness.

How does this get paid for? The report has proposed what it is calling a ‘global solidarity approach’ to financing nutrition through 2025.  For the first five years, international resources would need to be scaled up, allowing time for developing countries to mobilize domestic resources at levels proportional to their ability to pay.  After five years, countries would pick up an increasing share of the investment, which is essential for sustainability. Equally crucial are innovative sources of financing, like the Power of Nutrition, and the Global Financing Facility (GFF), focused on women and children. Marie Claire Bibeau, Canadian Minister for International Development and a strong supporter of the GFF, said it best: “If you want to support the most vulnerable, you have to start at the foundation: nutrition. But if you want to support the most vulnerable, you also have to focus on women and girls.”

There’s really no excuse for us not to get started investing in at least the ‘priority package’ investments immediately. They represent excellent value for money: an investment of about $4 per child per year to address stunting as well as other forms of malnutrition like anemia and wasting.  Just for comparison, US$ 485 billion per year is spent on fossil fuel subsidies--that’s $1.3 billion per day.

But it’s not just about putting more money into nutrition, it’s also about getting more nutrition for the money. Child mortality rates, for example, have declined from one in 10 children dying before age 5 in 1990 to one in 20 today, but progress on malnutrition has lagged: fully 30 to 45 percent of children in many low and middle income countries are stunted. This is not just because of a lack of investment, it also raises the question of whether we have had the right set of interventions and whether they have been delivered in the right way. That’s why the focus of this new framework is on scaling up what is cost-effective and what we know works.  At the same time, learning how other sectors can be effectively mobilized; and making investments in areas like clean water, sanitation and hygiene, social protection, and girls and women’s education and empowerment, are all critical to accelerating progress on nutrition.

Many players have stepped up on nutrition in an unprecedented way. Guatemalan President Jimmy Morales has committed to reducing stunting by 10 percent in 4 years. The African Development Bank is making nutrition a key focus of its annual meeting in Lusaka later this month, and its President Akin Adesina has called for the creation of an Africa Nutrition Index to push for accountability on the issue. Civil society groups from 1000 Days  and the Children’s Investment Fund Foundation to the ONE Campaign and Action Contre La Faim  have supported the new investment framework and call to action on nutrition.


At the World Bank, we think this focus is way past due. We see early nutrition as integral to supporting the optimal growth and development of children in the earliest years, along with early stimulation and learning. As our President Jim Yong Kim has pointed out, competing in today’s digital economy requires a workforce with well-developed brains. Governments that don’t invest in a skilled, healthy, productive workforce are harming their future prospects to compete in the global economy. It’s clear that we cannot continue on this path. The World Bank has committed to convening Finance Ministers at our Annual Meetings in October to discuss these issues and agree on how to scale-up action. If we want to see a world where there is no chronic malnutrition or childhood stunting, then we need to mobilize these modest resources now.

Early child care has a great influence in determining the well-being of children later in life. But due to economic and social reasons, greater number of parents cannot afford it, and the establishment have less to invest in extra funding to boost nutrition. We cannot continue on this path, we must improve on domestic resources mobilization with which we can invest in health care judiciously. The support of international community is very important in optimizing the investment trend in the most important areas the lifeline is most needed.

We also need to look at the issue in a more integrated way: it isn’t just about nutrition. It starts with good maternal health and includes early childhood development as well as livelihoods and literacy for the mothers. All these pieces have to fit together but we tend to treat them in silos. We need to rethink our models, now that the issue of the first 1000 days is on the table.

We fully agree and support this new move on effectively upgrading Nutrition. Any and all updates on this subject will be highly appreciated

Congratulations. The importance of the first 1,000 days of an infant's life is of seminal importance. However, there is a period seldom discussed which is even more important. That is the period before birth when the health and nutrition of the mother even before conception is of supreme importance to the development of the brain and hence cognition and brain capital. The brain cells divide early after embryogenesis, migrate to form the cortex and spread a field of connecting synapses which will become the root of learning, cognition, sensory and motor function. If any regional development is compromised during this development that deficit will be for life. The brain is a lipid-rich organ and the importance of ensuring maternal nutritional status for brain specific nutrients, prior to and during pregnancy, cannot be over-emphasised. Yes, the nutrition of the child is clearly important. However, the potential of the neural system is defined before birth. Hence the supreme important of the nutrition and health of the women and mothers.