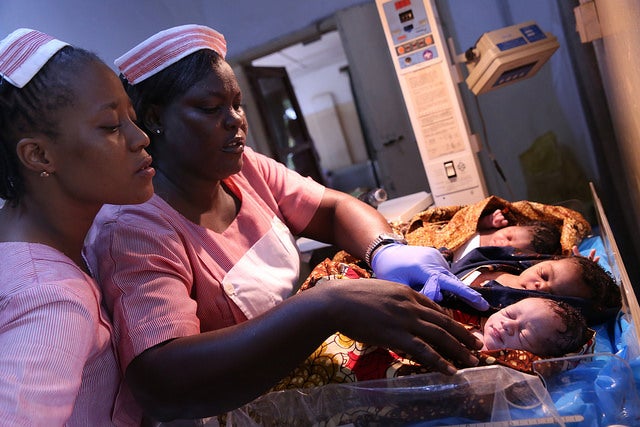 When we marked UHC Day at this time last year, the world had just adopted the Sustainable Development Goals, including Universal Health Coverage as a target. This was worth celebrating.

This year, just within this past month, we now have global agreement on how exactly progress towards UHC will be measured. For Universal Health Coverage to be meaningful, all people should have access to the health services they need, and at a price they can afford.  The SDGs will now measure concrete progress towards both of these aspects of UHC.  Each country will be evaluated on service coverage (measuring the proportion of the population which has access to 16 essential health services) as well as financial protection (measuring the proportion of households which spend too much of their budget on healthcare costs).

If we don’t measure the right things we are not likely to do the right things, so getting these measures in place is also worth celebrating. But these indicators are also also notable because it took over a year of coordinated effort by the global health community to get them included as official SDG indicators. WHO and the World Bank provided the technical analysis that defined the right UHC indicators, civil society groups worked tirelessly to persuade decision-makers at all levels to agree to them, and countries have shown their commitment by adopting them. This level of focus and coordination gives our work ahead a strong tailwind.

We now have more data on financial protection than ever before to guide the decisions and policies of countries, international partners and global health actors. In 2007, for example, we had data on financial protection from 89 countries. Today, The World Bank and the WHO have information gleaned from 550 household expenditure surveys collected from 125 countries, which together represent more than 85% of the global population.

There is less robust information on service coverage, with too many data gaps for too many countries. There is more work to be done here, but data we do have shows  that while we’re on the right path, we have a long way to go to ensure quality healthcare service that is economically viable for countries and households.

In Africa, for example, there has been major progress on health service coverage.  Many more children sleep under insecticide-treated bed-nets at night, and many more women access antenatal care during pregnancy and skilled birth attendants during childbirth.  But there are large disparities within countries, and progress has been very uneven for services like treatment for HIV-AIDS and access to clean water and sanitation. For example, in Eastern and Southern Africa, home to almost half of all people living with AIDS globally, an estimated 54% (10 out of 19 million) people with HIV receive treatment. In West and Central Africa however, only 28% (1.8 out of 6.5 million) of people with HIV receive treatment.

On financial protection, it is estimated that 11 million Africans are falling into poverty every year due to out of pocket payments for healthcare costs. Most patients pay for health services from their own household income, especially in low and lower middle income countries. While total health spending on the continent has grown rapidly in the past two decades, most of it comes from patients’ own out-of-pocket spending and international assistance.  To be sustainable, UHC needs more domestically-generated finance, with insurance or other pre-payment mechanisms keeping patient spending to a minimum.  But despite a commitment by African countries in 2001 to spend 15 percent of their budgets on health, only four currently do so.

Getting good health outcomes does not always mean investing in expensive hospital-based care with state-of-the-art equipment.  The reality is that 90 percent of a population’s healthcare needs can be met through a strong primary healthcare system, with patients only needing hospitals and specialists 10 percent of the time.  Countries with strong primary health care see fewer children die before their fifth birthday and more people living longer and healthier lives. They also see greater health equity, since the poor are more likely to access primary health care services in their community than go to an expensive hospital.  Strengthening people-centered primary healthcare services which target the poorest and most vulnerable should be the first order of business.

Strong, financially sustainable health systems create healthy citizens, who can then get the education and skills they need to thrive in a dynamic global economy. Health does indeed produce wealth. UHC Day is a chance for us all to redouble our commitment to invest in it.