School Meals Benefit Women and Girls around the World 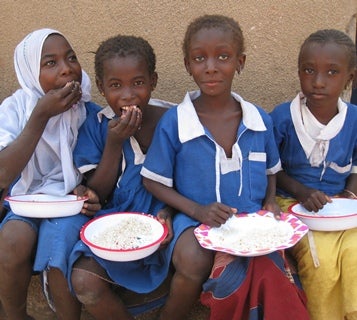 March 8 is the First International School Meals Day. New evidence suggests that today around 370 million children will eat a meal at school.

The U.S. Department of Agriculture (USDA) has declared March 8 the First International School Meals Day -- a celebration of a worldwide phenomenon. The World Food Programme (WFP) and the World Bank have shown that school feeding has been undertaken in nearly every country in the world. A recent publication led by Carmen Burbano at WFP, who joins me in writing this blog, shows that this investment exceeds US$50 billion every year. Some countries achieve huge coverage: India feeds 130 million children daily, Brazil 50 million and China more than 40 million. Even poor countries with small budgets and low coverage try to target their efforts so that children from the poorest and most vulnerable families can count on a meal at school each day.

This first school meals celebration happens to fall on International Women's Day, which is particularly fitting as one of the most striking benefits of school feeding is more girls attending school. In Pakistan, overall enrollment of girls after the introduction of school feeding grew 135% between 1998 and 2003. The program also increased awareness of the benefits of girls’ education: before the program started, 48% of households did not send any of their daughters to school; afterward, all households educated at least one daughter. In Bangladesh, girls’ enrollment increased by 44% in program schools, while those not receiving the program saw an increase of only 2.5% over the same period.

School feeding does not just bring benefits for education. It is one of the ways that countries can ensure that the most vulnerable children have a protective safety net; that is, they will receive a meal at school even if they can’t be fed at home.  This is not a new idea -- the United Kingdom's welfare state has its roots in a school meals program launched in 1906 -- but it has become more refined and developed as part of today's national social programs.

In Brazil, for example, the "Zero Hunger" program that helps that country to share its prosperity among all people, is underpinned by a model school feeding program. New evidence forthcoming from the WFP shows that since 2008, at least 38 countries have scaled up school feeding in response to a crisis, including food price hikes, financial crises, conflict or disasters.

Families in rich countries, and increasingly also in poor countries, recognize that the quality of the food we eat is at least as important as the quantity. That is true for school meals too, and there is a global movement to ensure that meals at school are not just filling but healthy. In Scotland, for example, International School Meals Day is being marked by a focus on healthy eating and obesity prevention.

Improving diet and food quality is one of the reasons for an increasing effort to source foods locally.  And in poor countries, there is an extra benefit from this because a local market for food can help local farmers, who are typically women working less than an acre of land. The agriculture team at the Bill and Melinda Gates Foundation has provided leadership in helping these women benefit from the school feeding market, especially through support to the Purchase For Progress program of WFP and the Home Grown School Feeding Program of the Partnership for Child Development.

Good school feeding programs are a major part of the way the world looks after its vulnerable children, enhances girls' access to education and promotes good dietary habits.  It is only right that the world should have a day to celebrate all that!