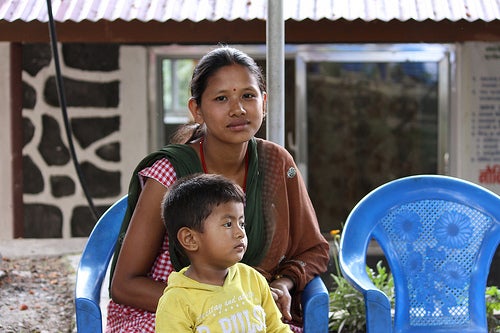 In 17th century India, the Mughal emperor Shah Jahan built an immense tomb of white marble—known as the Taj Mahal—in memory of his wife, Mumtaz Mahal, who died during the birth of their 14th child. The mausoleum, revered for its beauty, also serves as a sad reminder that maternal deaths have forever plagued humanity.

Maternal deaths, today an avoidable tragedy, still occur at relatively high rates in many developing countries, despite a steep reduction in maternal mortality worldwide since 1990. Globally, about 289,000 women died in 2013 from pregnancy or birth-related causes. Only two regions, sub-Saharan Africa and South Asia, accounted for 85% of global maternal deaths.

Data released earlier this year by the World Health Organization, UNICEF, UNFPA and the World Bank Group show that South Asia significantly reduced its maternal mortality ratio (MMR) per 100,000 live births, from 550 in 1990 to 190 per 100,000 live births in 2013, marking a decline of 65%, equivalent to 4.4% per annum. This is the largest MMR reduction achieved among the six world regions (Table 1).

Though all South Asian countries have contributed toward the global reduction in MMR, data point to several country success stories that might be instructive for other countries working to achieve Millennium Development Goal (MDG) 5, to reduce the MMR by three-quarters from 1990 to 2015 (Figure 1). 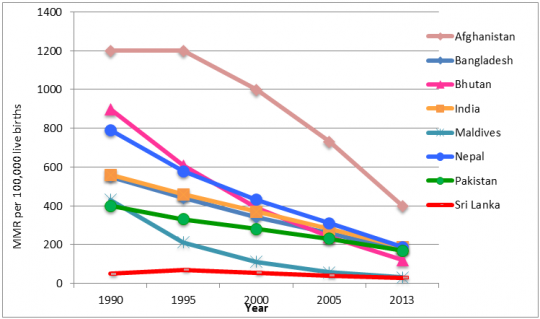 First, three countries, Bhutan, Maldives, and Nepal, are among the 10 countries worldwide that have reduced maternal deaths by 75% and above thus already achieved MDG5 (Figure 2).

Nepal, for example, has made significant progress in reducing  MMR due to a concerted, national effort comprised of several maternal and child health interventions. A landlocked and low-income country with a per capita GNI of US$1,289 (2012), Nepal has prioritized family planning and maternal and child health at the national level since the mid-1960s. More recently, the government has focused on increasing access and use of health services among the most vulnerable populations. Key interventions include: (1) adoption of a community-based approach to service delivery, (2) provision of subsidized or free care for maternal and child health services, and (3) introduction of female community health volunteers. Improvements in socioeconomic status have also contributed to better health outcomes in Nepal – the country has reduced poverty by 2.5 percentage points yearly since 2004. 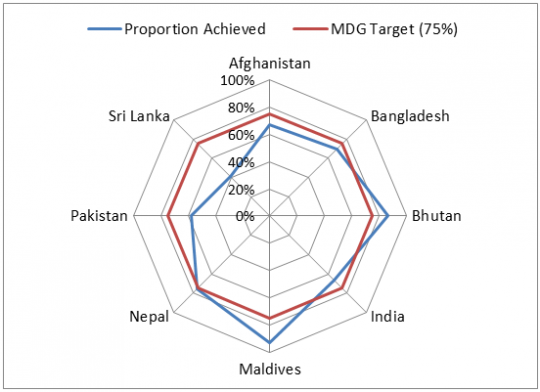 Second, three countries -- Afghanistan, Bangladesh, and India -- have achieved remarkable reductions in MMR of 65% and above (Table 2).

A decade ago, Bangladesh was off-track to achieve MDG5 but eventually achieved a 70% reduction in MMR, thus bringing it back ‘on track’, with annual MMR reductions of 5%, one of the fastest rates of reduction among low-income countries.

The decrease in MMR in Bangladesh appears to have been the result of factors both within and outside the health sector. Within the health sector, a strong family planning program was the main catalyst for accelerated fertility decline and thus reduction of MMR. Programs aiming to improve utilization of maternal care services, particularly by robust non-governmental organizations, and access to Emergency Obstetric Care, have also contributed to the decline.

Outside the health sector, Bangladesh has been a pioneer in areas such as girls’ education, employment of women and micro-credit programs, all of which have had an impact on lowering MMR as well.

Third, three countries contributed the most to the region-wide decline in the number of maternal deaths : India (74.1%), Bangladesh (12%), and Pakistan (7.6%) (Table 3).  Within India, three states: Uttar Pradesh/Uttaranchal, Bihar/Jharkhand, and Rajasthan contributed more than 50% of the total of India’s decline in maternal deaths.

While it is unlikely that Pakistan will achieve MDG 5 by 2015, the country has introduced several maternal and child interventions that are instructive.  Female community health workers, known as  Lady Health Workers,  have been highly effective in reaching women in rural and poor, urban areas, many of whom have limited mobility due to cultural restrictions. In some regions, women are not allowed to leave the house by themselves; they must be accompanied by a male or other family member.

As of 2013, Lady Health Workers covered 60% of the rural Pakistani population, providing an important link between the community and the health system, and increasing uptake of health services. A recent, independent evaluation found that Lady Health Workers have a positive impact on uptake of family planning and antenatal care.

Despite its accelerated MMR reduction, Afghanistan remains one of the world’s “high MMR” countries, with 400 per 100,000 live births.

Pakistan’s MMR is the second highest in South Asia, with the smallest rate of reduction, after Afghanistan. Slow fertility reduction, as well as health system-related deficits, including lack of trained health staff and inadequate low availability of emergency obstetric care,  has contributed to Pakistan’s relatively slow progress. The country has also been slow to advance gender equality in education and labor participation.

In addition, despite its accelerated MMR reduction, India still accounts for more than two-thirds of total maternal deaths in the region, or 17% of global maternal deaths, and shows wide disparity in maternal mortality across states and income groups.
Across South Asia, factors hindering reduction in MMR include high early marriage and pregnancy rates in some countries; inequity in access to maternal health services; and chronic malnutrition, a frequent underlying cause of maternal deaths, even for those in wealthier populations.

Finally, gender inequality persists in every domain of South Asian societies and has a daily impact on the lives and health of women.

While the unfortunate tragedy of Mumtaz Mahal still occurs in some areas of South Asia, tremendous progress in reducing maternal mortality over the last two decades offers hope. As several countries in the region have shown, innovative approaches can help save lives while giving life! A great blog, packed with information. But doesnt Sri Lanka deserve (more)explicit credit for its earlier sharp reduction and current low MMR rate? Is there a MMR at which it makes less sense to refer to these tragic deaths as "avoidable"? Would it have made sense to set the target as a 75% reduction or to below some absolute level of the MMR? (btw, Are the MMR and number of deaths in Sri Lanka correct for 1990 and 1995? They look inconsistent - a decrease in the number of maternal deaths from 300 to 250 and yet a rise in the MMR from 55 to 71).

Thank you very much for your thoughtful comments in which you raised excellent points.  First, we agree and acknowledge that Sri Lanka should be commended for its remarkable achievement in reducing maternal mortality compared to other countries with comparable income, which was noted in the Knowledge Brief "Sri Lanka: Maternal and Reproductive Health at a Glance". Also, the first graph in the blog clearly shows Sri Lanka’s extremely low level of MMR compared to its neighboring countries. This blog, however, is focusing on the pace of MMR reduction, i.e., progress towards achieving the MDG 5 target rather than the status.  In our view, this is a flaw in the design of MDGs, which was raised in several publications. For example, Matsubayashi, T. et al. conducted an “Analysis of Cross-Country Changes in Health Services”, Chapter 5 in Peters, D. et al. (2009) "Improving Health Services in Developing Countries: From Evidence to Action” and concluded that:

Less than two-thirds of LMICs are projected to reach international and Millennium Development Goal targets for health services by the target date of 2015, but identifying negative or slow rates of change in a country is probably a more important strategy than setting universal targets for health attainment.

Individual country differences (in delivery of health services, health status, and macro context) may be more important than international averages imply, undermining the relevance of targets set without reference to country-specific experience.

Rather than showing a common pattern of progress for health services, countries tend to follow their own pathways.

Countries’ very different starting points affect their prospects of achieving the targets and their rate of change.

Second, on your question of whether there is an MMR at which it makes less sense to refer to these tragic deaths as "avoidable", we believe that each maternal death is a tragic incident and should be avoided. Belarus, for example, was able to reduce its MMR to only 1 death per 100,000 live births in 2013.

Third, as for the number of deaths, you are right! These numbers were taken from earlier UN estimates of maternal deaths, which were subsequently revised in the UN 2014 report and we have therefore updated them in table 3 for all the countries to reflect the revised figures.  Thanks for noting that.

This latest ratio will imply that the country is far from meeting the MMR target of 134 under the Millennium Development Goals by 2015 after being among the countries on track to achieve it.

Equally interesting is the MMR estimate done by the Institute of Health Metrics at Washington University, which was published in May 2014 in a Lancet article and that put the MMR for Nepal at 272 per 100,000 live births in 2013, which is still higher than that of the UN.  The authors also identified 1, 588 maternal deaths, which is higher than the 1,100 deaths estimated by the UN.
The large discrepancy between the three estimates reveals the difficulty of measuring maternal mortality, which makes it even harder to track its progress.

Strengthening vital registration and use of systems intelligence to triangulate different sources of data will be key to address such a challenge.

Dear Sameh and Naoko,
Thanks for sharing your work, it is in deed a very relevant and informative article. I am a medical anthropologist and am currently conducting research on maternal and child health in Bangladesh. As part of my research I am interviewing experts in the field especially with reference to MDG5. It would be very helpful if you could both participate in my research and share your expert opinion. Please email me your contact information so that I can follow up accordingly. I look forward to hearing from you.
Best wishes.