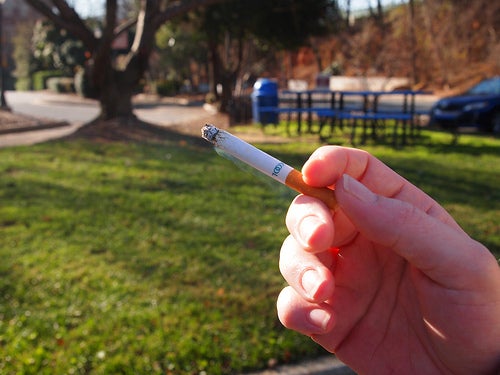 For those of us who have been impacted by the death of loved ones due to the negative health consequences of smoking, the recent announcement by Larry Merlo, the CEO of the U.S. pharmacy chain CVS, to stop selling tobacco products in the chain’s 7,600 stores, was a ray of hope and a step toward a future when public health concerns trump short-term profit motives.


CVS’s decision should be applauded and emulated as a good corporate example of the adoption of “shared value” principles,which combine social and economic concerns.  Indeed, this was not only a courageous decision to help prevent more societal harm caused by tobacco addiction, but also a business-savvy decision for a man who lost his father to lung cancer.

While the company stands to lose about US$2 billion in annual revenues (1.6% of its total sales of US$123 billion), he is positioning CVS for the long term as an important health care provider, not just for selling prescription drugs but also for offering basic health services such as flu vaccination and preventive care for chronic conditions in its fast-expanding “MinuteClinics” network.

Governments, private and non-governmental stakeholders, and international donors will do well to fully understand the business rationale of CVS and rethink their development strategies and assistance programs to make tobacco control a national and international priority.  As Mr. Merlo noted in a recent interview with the Financial Times, selling tobacco in CVS stores “had become a contradiction to the health outcomes that we were trying to achieve.”

So, if governments, private and civil society actors, and international donors are committed to maximize the well-being of the population, they must redouble multisectoral efforts towards tobacco control to avoid falling into the same contradiction that CVS faced.

Let’s be clear. As World Health Organization (WHO) experts pointed out years ago, tobacco is the only consumer product that eventually kills half of its regular users if they follow its manufacturers’ recommendations. So how to stop this “legalized” carnage across the world?

Besides corporate actions such as CVS’s decision,which will contribute to further reduce the social acceptability of smoking, the 2003 WHO Framework Convention on Tobacco Control (FCTC)—ratified by the majority of the world’s countries—offers a number of anti-tobacco measures, including high taxes on tobacco products and regulations to protect people from exposure to tobacco smoke in public places.

The good news is that the effective application of the FCTC measures is both good for public health and for the economy at large.  On one hand, these measures could yield cost-effective prevention for up to one-third of the world’s cancer cases— a positive step since cancer treatment is already unaffordable in many countries.  On the other hand, as suggested in a 2012 analysis conducted for the U.S. government by the Congressional Budget Office, an increase of 50 cents per pack in the U.S. excise tax on cigarettes and small cigars (adjusted each year to keep pace with inflation and, in the long term, with the growth of people’s income), and the resulting impact on people’s behavior and health, would increase U.S. federal revenues by about US$41 billion and reduce spending by US$1 billion through 2021.

Almost US$38 billion of the additional revenues would come from the higher excise tax, and another US$3 billion in revenues would stem from improvements in health, primarily from additional earnings as better health allows people to work more and be more productive.  Spending on the U.S. government’s largest health care programs, Medicare and Medicaid, would also decline slightly during that period as people’s health improved, while spending on Social Security would increase slightly as more people lived longer.

CVS CEO Merlo’s decision comes on the heels of another courageous position taken by Lt. General Ian Khama, President of Botswana. In spite of strong opposition from the tobacco industry, President Khama announced in his State of the Nation speech on November 4, 2013, a 30% increase in the tobacco levy on top of the 48% excise tax on tobacco adopted by the five Southern Africa Customs Union (SACU) countries, of which Botswana is a member.

Taking into account public health and economic evidence, and building upon these examples of bold leadership, we need to continue to keep pushing tobacco control across the world as a moral and development imperative.  And only then we will truly honor the legacy of our loved ones who suffered and were lost because of lung cancer and other tobacco-related diseases.