Universal Health Coverage in Turkey: “Pearls” Emerging from the Pressures of Ambitious Reforms 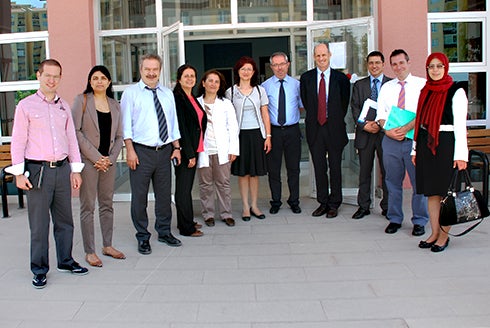 Two days after joining the World Bank, I traveled to Turkey to attend the government’s ministerial meeting on universal health coverage (UHC), which corresponded with The Lancet publication of an independent 10-year assessment of Turkey’s Health Transformation Program (HTP).

The Lancet authors—led by Professor Rifat Atun—demonstrate convincingly the tremendous progress Turkey has made towards UHC in the last decade in three key areas: 1) increased spending on health together with decreased out of pocket expenditures and impoverishment arising from health care expenditure; 2) steep improvements in access to a more comprehensive set of services, especially maternal and child health; and 3) a sharp reduction in geographic (East-West), rural-urban, and socio-economic inequities in health.

To get a better idea of how the HTP managed to produce results, a group of us spoke with Professor Recep Akdağ, who was the Minister of Health during the HTP.  Recounting the past 10 years, he stressed a number of points that in my opinion went well beyond the contextual specificity of Turkey.  And just as the best professors of clinical medicine offer “pearls” of wisdom to medical students, Professor Akdağ provided seven UHC “pearls” distilled from his experience leading the HTP in Turkey.

2. Short-term wins build buy-in for longer-term reforms.   In order to retain full political alignment with the UHC reforms among the Cabinet of Ministers and the Prime Minister, Professor Akdağ knew that an early “win” was critical.  As such, he issued a “decree” on the first day of the newly elected government in 2002, outlawing the involuntary incarceration of patients (or the deceased) in hospital facilities for reasons related to non-payment of hospital bills.   This and other subsequent popular decisions demonstrated the tangible benefits of the HTP to the people and secured political support for the longer-term—and in many cases, the tougher decisions related to the reforms.

3. “Adapt” rather than “adopt” the lessons from other countries.   Early on in his tenure as Minister, Professor Akdağ visited other countries in Latin America, Africa, Asia and Europe to learn about their efforts to achieve UHC.  These visits provided rich insights, but not a blueprint for reform.   In Turkey, he stressed that just as a good clinician must understand the patient before treating the disease, the same is true for UHC:  The Turkey context must drive the UHC reforms. Professor Julio Frenk echoed this experience at last week’s Ministerial meeting, where he stressed the value of cross-country comparative analysis but emphasized that the learning needed to be “adapted” not “adopted” to local context.

4. UHC reforms are both technical and political and must be managed with finesse.  The HTP in Turkey made a number of major changes in the functioning of the health system that required both technical and political competencies.  One of the toughest challenges—that very few health systems have been able to manage—is the problem of “dualism,” whereby health workers in the public sector also spend significant time working in the private sector.  The strategy to stem this problem was nothing short of ingenious.  The government began with a program of higher salaries and performance incentives to lure hospital physicians back into the public sector on a full-time basis.  Over time this program moved the number of specialists working full-time in the public sector from less than 20% to more than 80%.  It was only when the large majority of physicians were working in the public sector that a law was passed forbidding dual practice.  The sequencing of this reform—incentives to persuade practitioners to work full-time in the public sector followed by a change in the law—worked in such a way to insure that the law would succeed.   Should the law have changed at a time when the majority of physicians were engaging in dual practice, it would have most certainly met with insurmountable resistance.

6. Track implementation of the reforms on the frontline first-hand!  The former Minister emphasized the importance of following up on all decisions and changes of the HTP by seeing what was happening on the front line.  He made more than 300 visits to the frontlines of the reform during an eight-year period.  He also created a new cadre, “field coordinator physicians,” whose jobs it were to assess what’s working and what’s not on the frontlines.  This “attention to detail” and “learning from the field” are the basis for course corrections and adaptations necessary to steer implementation towards better outcomes.

7. Avoid being blinded by success.  While progress is apparent on multiple fronts, this has not blinded Professor Akdağ from recognizing residual, new and emerging challenges.  With rapid expansion of the pharmaceutical markets, there is a major problem of irrational use of drugs.  The Minister noted “rational use of drugs is not even taught in the medical school curriculum.”   Despite an impressive expansion of the health workforce, significant shortfalls remain in the production and deployment of skilled workers to deal with the sweeping epidemiologic transition to chronic illness.  Part of the challenge relates to the disaffection of teaching hospitals and Universities with the law that precludes them from working in the private sector.  And from a broader whole-of-systems perspective there are important issues related to the financial sustainability of Turkish UHC given population aging and the high cost of treating chronic health conditions.   This prospect is raising the importance of more effective primary prevention related to smoking, high-fat diets, and inactivity that thus far have failed to yield significant results despite their nominal designation in the expansion of UHC.

What “pearls” would you add to this list from your experience in countries?

I agree that some of Proessor Akdağ’s UHC pearls may prove valuable for other countries embarking on similar reforms. In particular his recommendation to secure quick political wins is an excellent idea. In a major reform process it is vital to demonstrate tangible popular benefits early on, to give the population and politicians confidence for the long road ahead.
In fact I would suggest that Turkey’s proven quick-win of outlawing the detention of the sick and the deceased in health units is something that could be adapted [or in this case it really should be adopted!] everywhere. Burundi’s ambitious UHC reforms started with a similar policy decree in 2006 when the President released hundreds of women and children from health units and launched a policy of free health care for these groups. This catalyzed substantial supply side reforms and as a result child mortality in Burundi has fallen 43% in 5 years. In addition to the obvious human rights implications of imprisoning the sick, it does nothing for the demand for health services when the local population regard their health unit as a debtors’ prison rather than place where they can access health care. As this video clip shows, this policy quick-win is, sadly, still an option for many countries http://www.clipsyndicate.com/video/playlist/5895/1343344?cpt=8&title=he…
Related to this quick-win idea, one pearl I would add to the list would be to provide populations with universal access to FREE generic medicines and preventive health commodities. As access to medicines is such an important factor driving demand for health services and medicine purchases often account for the majority of out-of-pocket expenditure, this is an obvious area to have a quick impact. Of course fulfilling this policy goal effectively, does usually require a fundamental overhaul of the drugs supply system – including establishing essential medicines lists, procurement, distribution, storage and prescribing practices. But even in previously weak health systems, it is striking how a free generic medicines policy can deliver quick-wins and stimulate wider reforms. Take Rajasthan in India for example, which after a 52% increase in health service utilization following the launch of its free medicines policy is now extending it’s free benefit package to include free diagnostic services. http://health.india.com/news/rajasthan-government-to-offer-free-tests-a…
In my opinion this is a quick-win UHC pearl other developing country governments may learn to treasure.

Nice pearls... Relevant for any country aspiring towards UHC. I would like to add to the Turkey lessons from a personal perspective. One of the few countries I have worked where the Minister and his team actively sought independent evaluations of the transformations, in order to internally learn and progress as well as to further strengthen stakeholder support among the skeptics. It also created a culture of transparency, and joint learning. Examples include the OECD World Bank study in 2009 followed by the Health Systems Performance Assessment and now the Lancet article.