28 women for every 100 men participate in the labor force in India and Pakistan — this compares to 64 women for every 100 men globally, and is the lowest in the world outside the middle east. This dismal statistic highlights a key development challenge: what policies can contribute to achieving gender equity in wages and labor force participation? Variation across regions and trends across countries both suggest cause for both optimism and pessimism. In 1990, Bangladesh had lower women’s relative labor force participation than India does today; today, 44 women for every 100 men participate in the labor force in Bangladesh. While Pakistan has experienced similar improvements, women’s relative labor force participation in India has actually declined since 1990. Regional variation in India paints a similar picture: while much of southern India is close to global averages, as few as 16 women participate in the labor force for every 100 men in major northern Indian states. 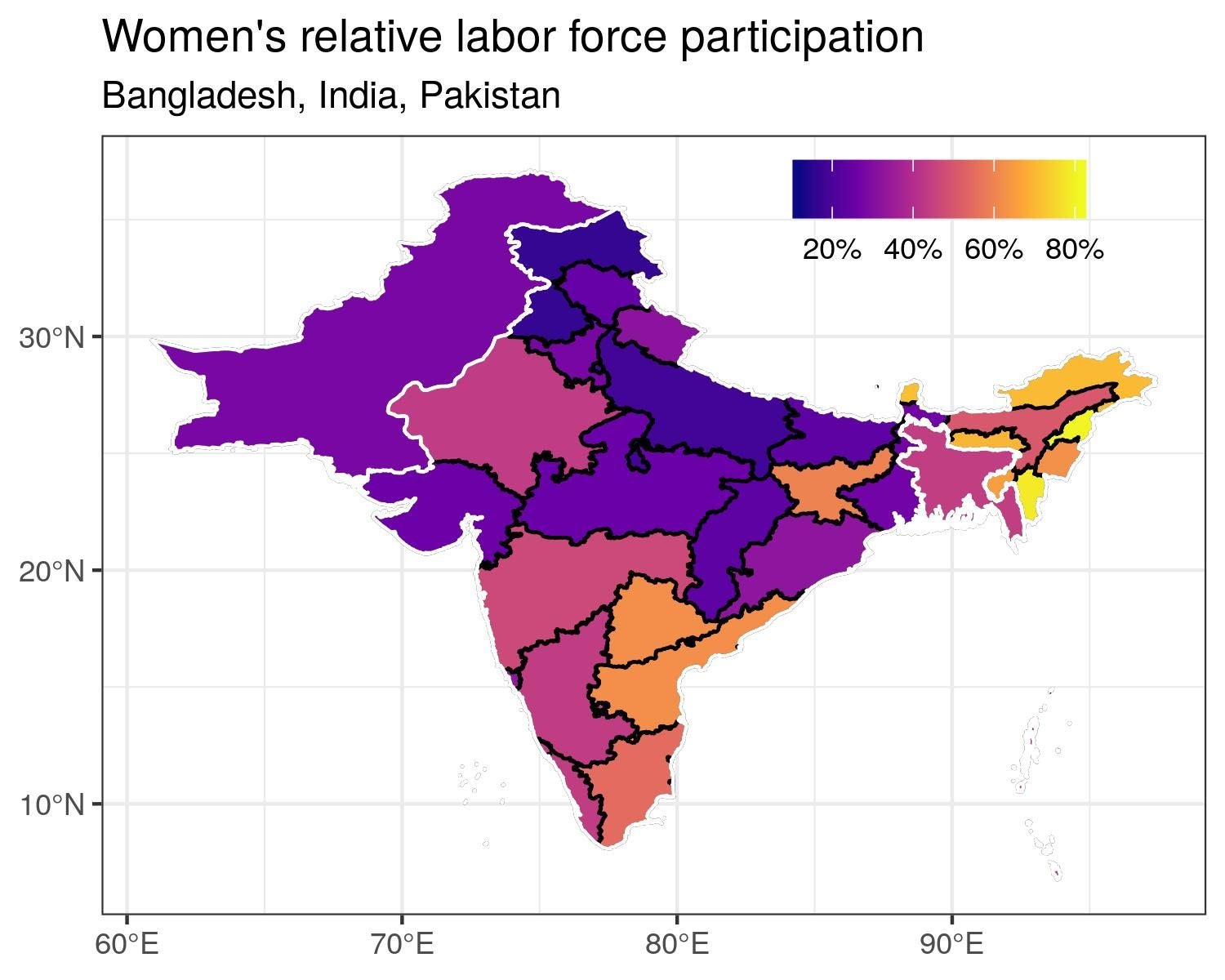 The good news is that a recent surge of work in South Asia formally documents the mechanisms underpinning low women’s labor force participation in the region, and proposes policy and interventions that can meaningfully reduce these gaps. There are many excellent reviews of the literature (to cite a few: Fletcher et al. (2017) focus on India, Jayachandran (2019) on social norms and women’s LFP globally, Duflo (2012) on women’s empowerment and economic development more broadly) — this blog simply highlights some of this recent work. The evidence stretches across demand and supply side side explanations, and their interactions in equilibrium.

Mobility constraints A wave of protests in India in 2012, motivated by a brutal sexual assault on a woman commuting to work, highlighted the risks women take when they choose to commute to opportunity. Recent work by Borker (2017) shows that women college students in Delhi are willing to forego admission in higher-ranked schools to as to avoid having to commute along relatively unsafe routes. The cost associated with avoiding violence on their commute is high: Borker estimates that, every year, women are willing to spend double the price of college tuition for a one standard deviation increase in safety. Recent work by Field and Vyborny (2020) uses a job platform to separate the role of safety and stigma in limiting women's participation in the labor market. First, they find that offering a subsidized transport service with a job increases women's probability of applying. They then show that, while price matters, the effects are primarily driven by the (random) offer of a women-only car. So is this safety or is it stigma? They find that women's perception of safety substitutes for the need of a women-only car, suggesting that this is not just about attitudes ("women should not commute"): safety appears to weigh more than social norms in these women's decision to commute to work. Taken together, these studies highlight the potential of interventions to improve women's safety in public transit to have large impacts on women's LFP in these contexts.

Education While interventions to increase safety reduce gender based violence, the potential to correct the attitudes that are the root cause offers enormous hope. Dhar et al (2018) evaluate an intervention at scale targeting attitudes towards restrictive gender norms among lower secondary students. They find large shifts, for both boys and girls, in not only attitudes but also behaviors, suggesting early interventions targeting these attitudes can be effective in shifting norms.

Norms and family While women themselves may want to work, they may face pressures from their family to stay at home. Subramanian (2020) uses a job search platform in urban Pakistan to study how characteristics of jobs affect women’s decisions to apply. She finds that women are much more likely to apply to jobs with female supervisors. However, women only show a preference for jobs with female coworkers when they are primed to think about their family's attitudes towards their choice of workplace. This suggests that women's preferences might not overlap with their family's attitudes, which in turn may limit their choice.

Psychological traps While women are constrained by these norms and attitudes, interventions can effectively support women to overcome these barriers. McKelway (2019) demonstrates that women can find themselves in a “belief trap”: they do not learn they can overcome these barriers because they do not believe that they can. She finds that two interventions in rural India — reducing family opposition to women’s employment and increasing women’s generalized self-efficacy — are substitutes (the first intervention overcomes the barrier directly, the second increases women’s beliefs that they can overcome it themselves). Moreover, successful job applications cause increases in women’s generalized self-efficacy. As demand side constraints such as taste-based discrimination can reflect back on women's perception of their own worth, this result offers a way out of this vicious cycle.

Husband’s wages and wage gaps Perhaps most surprising about the decrease in women’s labor force participation in India since 1990 is that it occurred during a period of rapid wage growth. Bhargava (2018) shows that married women’s labor supply is more negatively elastic to husbands' wages than it is positively elastic to their own wages, and changes in wages (increases in both men’s and women’s wages preserving the gender wage gap) since 1990 can fully explain changes in women’s labor force participation in India. On an optimistic note, they find that married women’s own wage elasticities are higher in younger cohorts, potentially suggesting shifting norms may eventually lead to a reversal of the current trend.

“Gendered” jobs When women’s employment is more accepted in some sectors of the economy, growth in those sectors can generate increases in women’s employment. Heath and Mobarak (2015) study the rapid growth of the garment sector in Bangladesh, which employs 15% of young women nationally. They find exposed women increase their educational attainment, delay marriage and fertility, and are more likely to enter the labor force — as these impacts drive additional increases in women’s labor force participation, growth in sectors employing women can generate impacts larger than direct effects on employment.

Role models If social norms shape attitudes, increases in women’s labor force participation or women in positions of authority can shift attitudes, generating positive feedback. Beaman et al. (2012) document that Indian villages in which leadership positions were randomly reserved for women see the gender gap in educational attainment fully close, with a reduced gap in aspirations driven by role model effects as the mechanism. Uckat (2020) complements this, finding that quasi-random assignment to a female manager causes women in Bangladesh garment factories to have increased decision making authority in their households. Nice job on this. Good highlight of the recent work on mobility constraints. Cheers.