ABCA 2017 Roundup: The latest research on agriculture in Africa 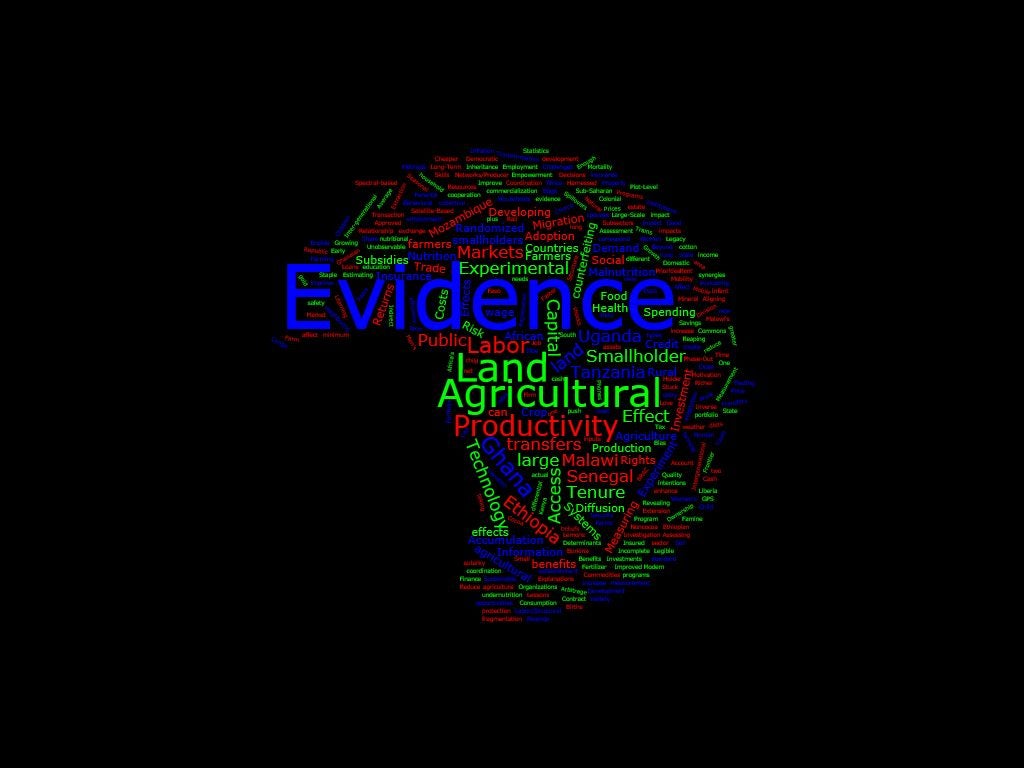 This post is joint with Niklas Buehren and Muthoni Ngatia
You can find the entire conference schedule here.  In the summaries below we link to papers and videos (where applicable).

The conference opened with an overview of challenges and opportunities for African agriculture by Albert Zeufack and a wide ranging overview of nutrition security from Kay Dewey.   You can watch the video of that session here.

Nutrition 1
Being exposed to famine in #Ethiopia, in utero and as a young child, significantly lowers human capital outcomes.   And effects persist into the next generation.   (Asfaw)

Larger land inheritances lead especially male youths to migrate less to urban centers and increase the likelihood of them being employed in the agricultural sector. #Ethiopia #IV (Kosec)

Considerable gender gaps in different measures of land rights, especially ownership, still exist in SSA and a single proxy may not be sufficient to monitor progress. (De La O Campos)

Agricultural markets
The introduction of mobile phone services from 1997 to 2009 explains a 4.5-11% percent reduction in price dispersion of maize prices #DiffinDiff #Mozambique (Zant)

Land Tenure 2
What happens when communal land is privatized?   Evidence from a natural experiment in #DRC shows no increase in agricultural productivity but an increase in conflict over land.  (Vinez)

Skills are predictive of agricultural outcomes but technical and non-cognitive skills are more difficult to measure than cognitive skills though there are ways to make measures less ness noisy. (Macours)

Day 1 closed with an invited panel of Alain de Janvry, Michael Carter and Lori Beaman discussing agricultural productivity and poverty reduction.   Alain gave us some thoughts on the need for a rural transformation (think off-farm, rural work) as well as an agricultural transformation.   Michael laid out the factors limiting a green revolution in Africa and zoomed on addressing liquidity constraints, with savings interventions and smart subsidies.  Lori discussed direct and indirect channels by which investment in agriculture could reduce poverty, zooming in on experiments in Mali.  You can watch their presentation and discussion here.

Day 2 opened with a keynote address with Ted Miguel on understanding agricultural productivity gaps.  You can watch the video here.

Development Programs and Agriculture
Using an #RCT to evaluate a program to provide advice to farmers versus advice and a farm plan versus advice, a plan and a cash transfer in #Senegal.   Cash transfer plus plan versus plan alone have statistically equivalent effects on gross value of ag output in year 1, but not year 2 (when both have no significant impacts).   Livestock effects are more pronounced in year 2 from the cash transfer.  (Ambler)

What is the combined impact of farm subsidies plus cash transfers in #Malawi?   Joint impact on consumption seems higher, particularly for labor unconstrained households using matching and diff-in-diff. (Pace)

What is the effect on commercialization when smallholders get cash transfers?   Cash transfer increased sales of crops at both the extensive and intensive margins according to evidence from an #RCT in #Zambia.  (Prifti)

Risk and Insurance
A crop insurance product that allows farmers to pay the premium at harvest has a take-up rate of 72%, compared to 5% for the standard upfront contract, and take-up is highest among poorer farmers. #RCT #Kenya (Willis)

Testing a pilot area-yield index insurance project sold to cotton farmer groups, no impact was found on cotton production, most due to the late sale period (during the sowing period). However, substantial and significant impacts were found on several activities and assets such as field investments, sesame cultivation and livestock herding.  #RCT #BurkinaFaso (Stoeffler)

Productivity of Smallholder Farms
New high-resolution imagery can provide measurements of smallholder productivity that are as accurate as traditional survey based measures. (Burke)

The inverse relationship between plot size and productivity can be explained by the edge effect which leads plots with higher perimeter-area ratios to be more productive. #Uganda (Bevis)

Farmers rely on fertilizer observables (e.g. caking, clumping) to assess unobservable quality, and are unwilling to purchase substandard-looking (but agronomically acceptable) fertilizer unless it is sold well below market price. #Tanzania (Michelson)

Households
Do different types of assets have differential effects on child education?   Using production function estimates and an IV on data from #Tanzania the authors find that agricultural assets have a negative association with years of education completed, but durables and housing quality have a positive association.  (Kafle)

What is the impact of mining activities on educational outcomes in host communities?   Using spatial and temporal variation in mine opening and closing in Ghana, mines are associated with increased enrollment in primary school, but lower enrollments among youth 17 or more year olds.   This latter effect is different for males versus females.   (Mensah)

Slightly more than half of kids in #Nigeria don’t have the same occupation as their parents.   For kids who do switch, the education of the mother and mother’s occupation seem to matter.   From analysis with panel data.   (Yitbarek)

Social Networks/Producer Organizations
What happens to social capital when there are large scale agricultural investments?  Cross sectional analysis of a high stakes game show that those close to the investments are more likely to cooperate in #Zambia.  And they are more likely to share public goods.   (Sipangule)

Are there spillover benefits from large farms in #Ethiopia?  Not much in terms of changing farming practices (positive or negative), but maybe a bit on helping with responding to shocks.   Interesting fact:  among commercial farms, the highest yields are in small commercial farms (Deininger)

More productive neighbors increase your productivity, by a significant if not huge amount.  Seems to be working through psychological mechanisms, not learning or friends.  Evidence from an #RCT on tea farms in #Malawi.  (Kerwin)

Smallholder farmers: productivity and coordination
There is a large and negative gender gap in dairy farming productivity especially in non-cooperative households. #Senegal (Hidrobo)

Learning about the intentions of other members in a farmer group improves measures of collective action in a lab setup. #RCT #Senegal (Aflagah)

Very useful event i.e. ABCA 2017 Roundup: The latest research on agriculture in Africa and its write-up. Thanks for sharing it.

It was a great event! Happy to be part of it. Many thanks to Markus, Niklas, and Muthoni for sharing the write-up.Extremely useful material familiarize with the latest research on Agriculture in Africa.

Hmm is anyone else encountering problems with the images on this blog
loading? I'm trying to find out if its a problem on my end or if it's
the blog. Any responses would be greatly appreciated.