All for One and One for All? Why Networks Don’t Prevent Poverty Traps: Guest post by Arun Advani

This is the fourth in our series of posts by PhD students on the job market this year.
Giving livestock to poor households can increase their incomes substantially. This naturally raises the question: why were households not investing in such livestock before? One obvious answer is that they are poor – this means they can neither afford to invest themselves, nor get a loan from a bank (or microfinance organisation). But the puzzle is more subtle than that. When facing a crisis, even very poor households borrow informally, from a network of friends, family, and neighbours, to fund consumption. In addition, households in these networks collectively have the resources needed to invest in livestock. So the real question is: why don’t households pool resources to allow investment? What makes borrowing to invest so different from borrowing to smooth consumption?

The Explanation
My Job Market Paper provides an answer to this question. The key point, which I formalise theoretically, is that borrowing to invest is different because it changes the future value of the relationship. If I want to borrow money from you today because I can't afford to eat, you might lend it to me because sometime later you are as likely to need to borrow from me. We don't write a formal contract, but borrow informally, based on a mutual understanding of reciprocity.

Investment changes this dynamic. If I borrow from you today so that I can invest, then I will be better off tomorrow. That means I’m less likely to need to borrow from you, so the value to me of our relationship is reduced. At the same time, I need to increase the amount I give you, to repay the borrowing.

If we had been able to write a contract, and to enforce it without cost (‘full commitment’), then you could lend to me today, knowing that I would repay you in the future using the additional income from investment. Without such contracts, I will want to renegotiate the arrangement, by threatening to otherwise walk away (‘limited commitment’). It is this that prevents you lending me money for investment.

The first and third of these lead to a ‘network-level poverty trap’: a threshold level of resources needed by the network in order for any household in the network to be able to invest. This is analogous to models of poverty traps at the household level: investment does not occur when incomes are too low because the cost of giving up consumption today is too great, even with the high rates of return on offer.

However, to explain why there is little investment even when households belong to networks which have enough resources, we need to consider limited commitment. This reduces the amount a household can credibly promise to repay, so limits the amount it can borrow for investment. Now it needs to fund most of the cost of investment itself, so total income will generally need to be higher for investment to occur: the network-level poverty trap is ‘deeper’.

The Evidence
One way to look for a network-level poverty trap empirically is to see how total investment by a network of households varies with their collective income. If a poverty trap exists, there should be no investment below some threshold level of income, but above this investment should be increasing with income. The problem with looking at this relationship directly is that incomes themselves depend on investment, as well as the reverse, making it hard to see what causes what.

To overcome this problem, I use data from a large scale randomised controlled trial (RCT) in Bangladesh. The RCT was implemented by BRAC, a large Bangladeshi NGO, and provided two cows to the poorest households in 700 randomly selected villages (out of a possible 1400 villages). The evaluation of the program shows it was success: on average the program increased incomes of recipients by 21% after four years. I use the variation this creates in the level of aggregate income to look for evidence of a poverty trap, comparing treatment and control villages.

Figure 1 shows a non-parametric plot of the relationship between the aggregate value of asset transfers provided by the program (converted in 2007 USD), and the additional investment that households in the network undertook, between two and four years after the initial asset transfers, for treated villages. A poverty trap relationship is clear: if the network received less than $3500 (14% of median network income), asset transfers by the program did not generate any further investment (this threshold is found using formal statistical methods). Above this threshold, additional investment increases in proportion to the transfers provided. Adding the best fitting linear regression shows that each dollar spent on transfers generated more than 1.5 dollars of additional investment beyond what was provided. No such relationship is visible for networks in the control villages, and the result remains when I directly compare the effect for treated and control villages in a regression framework (see paper). 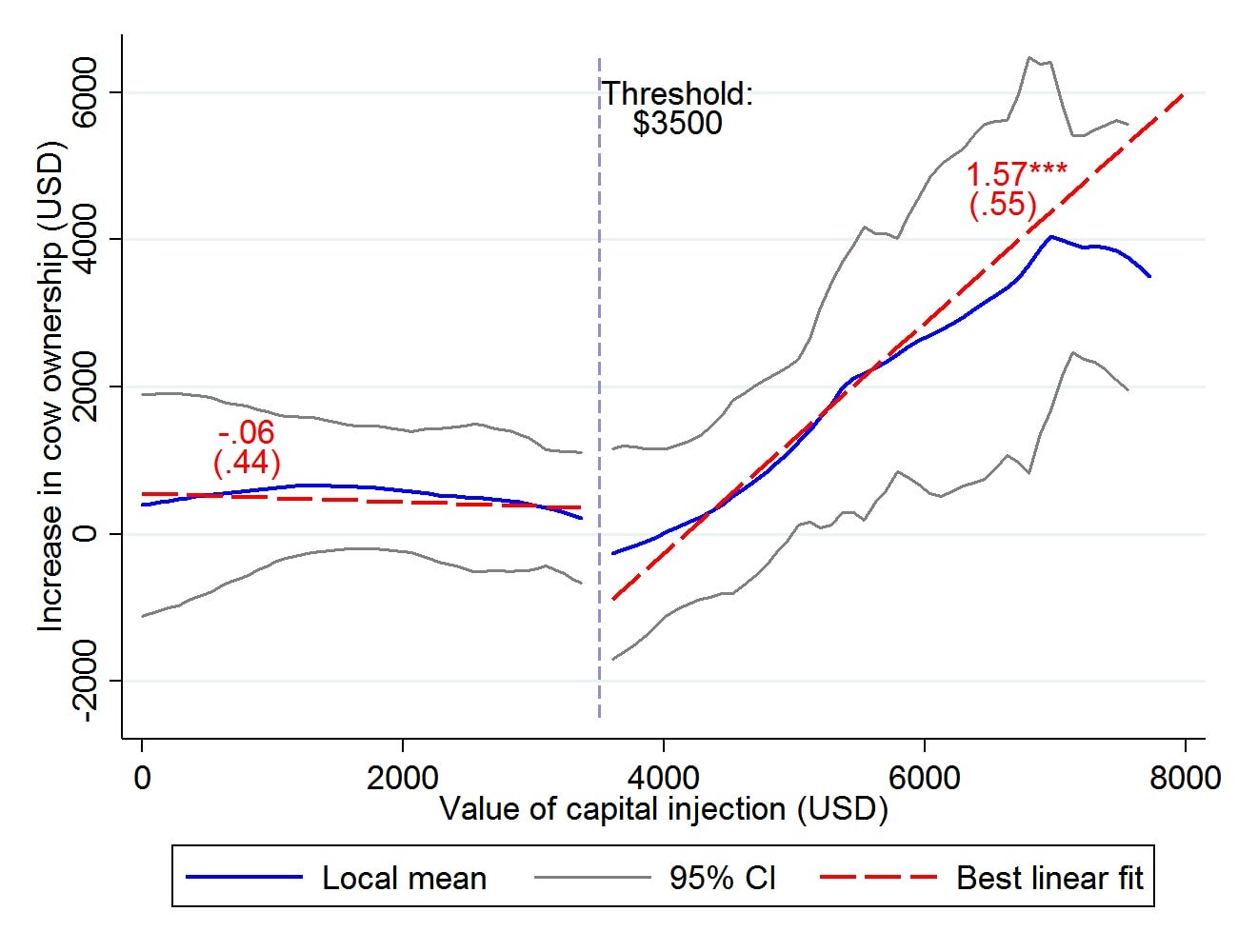 Further investigation reveals that of the additional investment that occurs above the threshold, around 80% is done by households who did not receive assets from the program. This further underscores the importance of taking into account spillovers and interactions within networks when studying the effects of programs. If instead I had only looked at the household level, I would have concluded that the program did not push households out of a poverty trap (though it did increase the level of consumption and income).

Of course, there are alternative hypotheses that could generate this sort of non-linearity. Further investigation rules out the most plausible alternatives. These include increasing returns, aggregate demand effects, price and wage effects, or changes in households’ aspirations (see paper for details).

The Policy Implication
The primary goal of ‘Graduation’ programs is to raise the incomes and consumption of poor households. Across a range of countries and contexts they are successful in doing this. But the next step in development is thinking about income growth: how can policy further increase the incomes of poor households without needing another asset transfer.  My results show that when asset transfers are sufficiently concentrated at the network level, they stimulate additional investment, by pushing the network out of the poverty trap. As Graduation programs continue to expand, both in Bangladesh and elsewhere, policy could increase the impact on income growth by targeting transfers at the level of communities, rather than households.

Arun Advani is a PhD student at University College London

Hello,
I found your blog and paper quite interesting. Is there a way we could replicate this model for India? What data would you use in that case? Also what do mean by targeting transfers at the level of communities rather than households?

Giving livestock to poor households can increase their incomes substantially. This naturally raises the question: why were households not investing in such livestock before? One obvious answer is that they are poor.
I like the line above so much. It has a kind of rhythm to it. Keep it up!