This is the second in our series of posts by Ph.D. students on the job market this year
Setting food-price policy is hard. Smallholder farmers are better off with higher crop prices, but consumers want lower prices. So what is a policymaker to do?

Well-integrated agricultural markets can tackle both sides of this food-price policy dilemma, by pulling crops out of surplus areas (to boost prices received by farmers) and pushing food into deficit areas (to reduce prices faced by consumers).

But, alas, agricultural markets in sub-Saharan Africa are not well-integrated. Wide variation in prices across regions and seasons is common, and large gaps between farmer and consumer prices are the norm. There are many possible causes. One issue is that trade is expensive to conduct in the region. To move crops from surplus to deficit areas, agricultural traders must pay high transport costs, spend time and money searching for sellers and buyers, and battle institutional failures like poor credit availability and contact enforcement. Yet, there may be another important driver of the gap between farmer and consumer prices – one that has been voiced by policymakers but is much less well-documented empirically: agricultural traders may be engaging in imperfect competition and extracting rents.

It’s easy to see how this could happen. Becoming a wholesale agricultural trader isn’t easy – it requires enough working capital to pay for a truck, warehouse, and inventory, as well as a large network of contacts to identify market opportunities. These start-up costs may create barriers to entry that allow traders who are already in the business to exert market power, paying below-competitive prices to farmers and charging above-competitive prices to consumers. However, empirically documenting this practice is difficult. Traders rarely keep detailed enough records to accurately assess their profits, and self-reporting bias may be a problem in an environment in which they are fearful of being seen as exploitative.

Why Do We Care?

Whether traders exert market power matters for policymaking. If they are operating in a competitive environment in which price gaps are purely due to high transactions costs, then policies that reduce these costs -- road improvements, preferential terms for business loans, and trade intelligence systems for broadcasting prices, for example -- would yield savings that traders would pass on to farmers and consumers. On the other hand, if traders are colluding, gains from policies that reduce traders' operating costs may not be fully passed on to farmers and consumers; instead, the bulk of these benefits may be captured by the traders themselves.  To meaningfully improve farmer and consumer welfare in such an environment, policies would instead need to explicitly target enhanced competition.

A Test of Competition in Agricultural Markets

My job market paper implements a novel test to measure the degree of competition among agricultural traders. In 60 markets in Kenya, I offer a subsidy to maize traders for each bag they sell.  The subsidy is offered to all traders in the market for a full month.  The timing of the subsidy offer is randomized, allowing me to use market and month fixed effects to estimate how much of this subsidy is passed through to the price traders charge to consumers. In a perfectly competitive market, traders should pass through 100% of the subsidy as they underbid each other to get the most customers. However, if traders are exerting market power, they will pass through only a fraction of the subsidy. I show in my paper how this fraction depends on the curvature of consumer demand, which I also estimate experimentally. This allows me to identify predictions for how much of the subsidy will be passed through under several familiar models of competition.

The Degree of Competition and Implications for Welfare

Figure 1 presents these predictions in black dotted vertical lines. My demand estimates predict that traders would pass through 100% of the subsidy under perfect competition, 55% of the subsidy under Cournot competition, and 26% of the subsidy under collusion. The actual rate of pass-through that I observe in the experiment is shown by the red vertical line. At 22.4%, this rate is remarkably close to (and statistically indistinguishable from) the collusive market prediction. Moreover, the observed pass-through is far from the predictions of a Cournot or perfectly competitive model. These results suggest a very low level of competition among traders, who appear to act as a single profit-maximizing monopolist in the market. 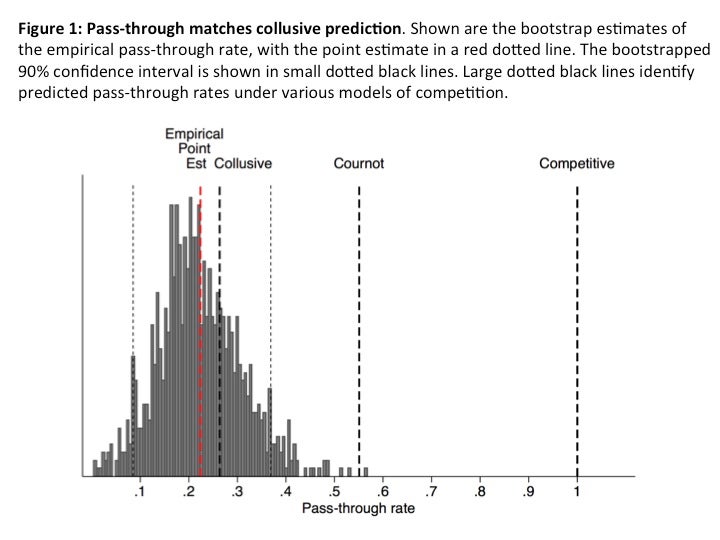 I use these experimental estimates of pass-through and demand curvature to calibrate a structural model. This lets me do two things: First, I can conduct welfare analysis. I find that imperfect competition reduces the total welfare generated by these transactions by 14.6%. Of the remaining surplus, traders capture 79% percent while consumers enjoy a mere 21%. Second, I can run counterfactual simulations, which suggest that consumer welfare would increase substantially with more competition. These gains are driven largely by a transfer of surplus from traders to consumers and are augmented by an increase in market efficiency.

The Impact of Market Entry

Given the large potential benefits from increased competition, what policies could be implemented in this environment? Antitrust regulation would probably be difficult to enforce. Moreover, direct state intervention into the market to supplant the private sector would likely create more problems than it would solve, as seen during the largely unsuccessful experience with state-run markets in the region in the 1960s and 1970s.

Instead, policies facilitating market entry (and therefore greater competition) may be more feasible. To test the power of such policies, I run another experiment in the same 60 markets in which I generate exogenous entry by randomly incentivizing new traders to sell in the market for the first time. The experiment results in an additional 0.6 traders per market-day, a 13% increase in the number of traders in a typical market. However, I see no effect on prices, suggesting that new traders are able to readily enter into the incumbents’ collusive agreements. My results therefore cast doubt on the power of entry by a small number of new traders to dramatically improve market competition in this setting.

So Where Do We Go From Here?

Identifying ways to meaningful increase the level of competition in these markets is an open challenge, given that collusive agreements seem flexible enough to incorporate at least small numbers of new traders. The physical layout of the market may contribute to this flexibility. Traders sell right next to each other, so they can easily see each other’s prices and quickly respond to any deviations from agreement with a rapid price war. Further, consumers typically only shop in their local market, so they are captive to the traders there. More fundamental changes to the market environment may be needed to really enhance market competition.

New technologies, such as mobile marketplace platforms, hold some promise here. On these platforms, coordination on price is more difficult, because a larger pool of sellers interacts more anonymously. Furthermore, buyers can access a variety of sellers, rather than just those close to home. However, technological solutions still need to address the real-world constraints of high transportation costs, limited trust, and other barriers that discourage exchange between new parties. Craig McIntosh and I are currently testing the impact of one such mobile marketplace in a large randomized control trial in Uganda. Stay tuned - results are due next year. The power of these technologies, as well as the power of other potential mechanisms for expanding competition in these markets more broadly, is a ripe area for future research and policy experimentation.

Lauren Falcao Bergquist is a PhD candidate in economics at UC Berkeley.  Her job market paper can be found here.

Hi Lauren,
I can understand the choice of methodology from a PhD research perspective but less so from the perspective of providing meaningful and practical information for policy use by governments such as those in SSA. Care to consider this article http://journals.sfu.ca/jmde/index.php/jmde_1/article/view/159/181 and respond?
Best of luck on your PhD!
Cheers,
Ian

Hi Ian,
Thanks very much for your comment and the article link. I agree that the first part of this paper is more in the vein of basic research -- with a goal of really understanding the underlying structure of these markets -- in contrast to the more applied research typically done using impact evaluations, which might more directly test specific policies to solve a problem (though note that the entry experiment, which I briefly describe towards the end of the post, is designed to test the efficacy of a broad category of polices that might address low competition).
Just as the medical sciences use both basic and applied research -- one to understand systems and identify problems, the other to test solutions -- so I believe development can benefit from both forms of research. Making sure they speak clearly to each other is an important part of this, though, so I appreciate efforts from folks like you to make sure they do!
Best,
Lauren

Being a basic research approach used here from a PhD student i believe empirical research would bring issues of policy into perspective, Nevertheless having been born and lived in Kenya, Maize as food in Kenya is a very complicated subject , over 95% of Kenyans rely on maize as the only stable crop for consumption , infect only white maize, despite the presence of other foods like sweet potatoes , yams , cassava .To a bigger extent Government still interferes with maize pricing.The other major obstacle is cheap maize from South Africa , USA, which have a lower cost of production than Kenya.Maize markets are both private and Government , and farmers in most cases sell their maize to middle men to avoid translocation costs and asymmetry in pricing.The research lacks the depth analysis on a study on Kenya maize market, infarct it sounds like he is basing his findings purely through some middlemen interpretation . The bulk of the maize is sold to National cereals and produce board, the remaining is through middlemen.