Are Women Really Happier than Men Around the World? Guest post by Mallory Montgomery

This is the sixteenth in our series of job market posts this year.

One common yet counterintuitive finding in the life satisfaction literature is that women on average report higher life satisfaction than men, even though they’re worse off in many measurable ways.  This finding raises the question: are women actually happier than men, or are they just reporting that they’re happier? My job market paper seeks to answer that question.

To do so, I use data from the Gallup World Poll, which interviews people around the world asking them about the things that are important to them, including their life satisfaction, or happiness, overall. I analyze responses from about 46,000 people in 103 countries.

Women definitely say they are happier
On average, when rating how satisfied they are with their present lives as a whole, women put themselves at 2.98 on a 1-5 scale, and men put themselves at a 2.95, for an overall gap of about 0.03. That doesn’t sound like a lot, but it’s actually a big difference: its equivalent to the increase in life satisfaction that comes from moving up their country’s income distribution by about 5 percentage points. In the U.S, that’s equivalent to making $2,000 to $4,000 extra per year. When I control for other characteristics – country, income, employment status, marital status, education level, whether or not the person has health problems, and whether they live in an urban or a rural area – the gap more than doubles. That’s about the same as the increase in life satisfaction from moving up the income distribution by more than a decile, getting an extra $5,000 to $14,000 per year in the U.S.

What this data suggests is that women’s day-to-day lives include more negative feelings, yet they report higher happiness overall. This could be really what’s happening – any parent (or graduate student) understands taking on extra stress or worry because a child (or dissertation) brings a deeper joy. But women are worse off in many ways that we know make people feel satisfied with their lives: they’re less educated, they have lower incomes, they have worse self-reported health, and they’re more likely to be divorced or widowed. Plus, women have less representation in most governments, face gender discrimination, and are more frequently victims of personal violence.

Anchoring vignettes let us compare responses on the same scale
If we only consider self-reports, it sounds like women are happier than men. But what if women are systematically using the response scale differently than men are? What if women have a different set of reference points for what kind of life deserves a 1, 2, 3, 4, or 5 on the 1-5 scale?

In addition to rating their own life satisfaction, every respondent also rated the life satisfaction of six hypothetical people in short stories called anchoring vignettes. The vignette characters differed in their age, income levels, health, work life, family/social life, and gender (three males and three females). Here are examples of the vignettes: The income levels were filled in according to the respondent’s country. On average, women rated all six vignettes higher than men did, by about 0.04 on average – similar to the gender gap in self-reports. In other words, for the same described life circumstances, women gave a higher life satisfaction response. That, in addition to the other evidence that women’s lives are not more satisfying, suggests that women have different reference points when answering the same life satisfaction question, and that perhaps they are not happier than men after all.

I test this by “anchoring” every respondent’s scale to one reference scale using the vignettes. The left two scales of the figure below show how two people answer the life satisfaction question for themselves and three vignettes. Maria rates herself in the middle, which for her is between vignettes 1 and 2. Jorge’s self-report is lower than Maria’s, at the same level as he rates vignette 2. In the rightmost scale, we see where Jorge would have rated himself, if he used the same scale as Maria, based on how they rated the vignettes – and once they’re on the same scale, we see that his life satisfaction is actually higher than Maria’s, despite their self-reports. As long as we can assume that (1) they’re using the same scale to rate themselves and the vignettes, and (2) they interpret the vignettes the same way and agree on which is best, second best, etc., then we can put them on the same scale. The first assumption is straightforward, and several authors have found that it generally holds (e.g. King et al. 2004, Van Soest et al. 2011). I tested the second assumption, and my results show that it also holds. 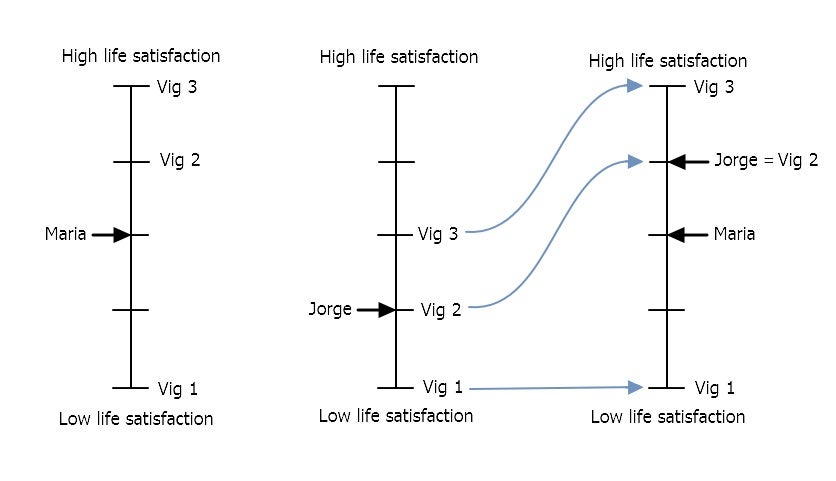 Once they’re using the same response scale, women aren’t happier than men
Once men’s and women’s self-reports are on the same scale, we can compare them directly. I find that the previous gap is reversed by about 150% – that is, women are actually less happy than men on average, and the true gap is about -0.015.

Before we can use happiness self-reports to measure progress, or evaluate policy (as has been proposed) we need to be sure we’re measuring what we intend to. This analysis shows that looking only at self-reports leads to a misunderstanding of gender differences. Any comparison between groups – residents of different countries, people with different ethnic backgrounds, etc. – may suffer from a similar bias. Unfortunately, we cannot know what scale differences exist without including anchoring vignettes in surveys. Although it can be costly to add anchoring vignettes, it’s worth the expense to improve the validity of the results.

Mallory Montgomery is a Ph.D. student at the University of Southern California.
This research was supported by grant 1 R01 AG036784-01 from the National Institute on Aging.
A previous version of this post was published at The Evidence Base.
Topics
Jobs & Development

I think men are generally happier than women because it doesn't take a man as much to make him happy. I guess if you factor all of the different things ( like women are using a different response scale,)then it just gets very confusing.

Women's quality of life is better than that of men according to most indicators. If they felt less happy that would be counter-intuitive and needed an explanation. Now it's exactly as it should be.

This article has some weaknesses:
1) It first assumes that women have a worse life, which is not a given fact, than ask the question "why do women say they are more happier than men".

3) The "vignette method" isn't good. People judging other people's happines doesn't say anything about what their reference points are. People can have double standards. They can say "I'm making 100k per month, have friends, love, family but I'm unhappy", while judge another lonely person who's just making 1k per month "he's making enough money, so he must be happy". People judge other people different from themselves, so the vignette method is far from being reliable.

Women are more likely to be divorced? So more lesbian couples divorce than gay couples? That's the only possibility that can make this true.
Also, they are more likely to be widowed? So men die more often than women then. Which is worse, the dying party or widowed party?
I am seeing a lot of biases in this article.