This is the tenth entry in this year's job market series. You can read the previous entries here.

Street harassment, or sexual harassment in public spaces, is a serious problem around the world. In Delhi, 95 percent of women aged 16-49 report feeling unsafe in public spaces (UN Women and ICRW 2013). Women incur significant psychological costs from sexual harassment (Langton and Truman 2014) and actively take precautions to avoid such confrontations (Pain 1997). However, there is limited evidence on the economic costs of daily harassment. Moreover, there is no quantitative evidence of the effect harassment has on women’s human capital attainment.

One potential cost of an environment in which street harassment is prevalent is that women may avoid opportunities that would otherwise be available to them. In Delhi University (DU), for example, women tend to attend lower quality colleges than men, even though on average they do as well or better than men on the national high school exams. In my job market paper, I ask whether women choose to attend lower quality colleges in order to avoid sexual harassment while travelling to and from college. I answer this question in a context where 71 percent of the enrolled students live at home with their families and travel to college every day, mostly by public transport, and where over 89 percent of female students have faced some form of harassment while traveling in the city. Specifically, 63 percent of female students have experienced unwanted staring, 50 percent have received inappropriate comments, 40 percent have been touched, groped, or grabbed, and 26 percent have been followed.  I find that women’s college choice can be explained in part by their concerns about exposure to street harassment.


Exploiting the ideal setting and filling in data gaps
To assess if women are choosing a low-quality college because it is located on a “safe” route, I evaluate the difference in female and male students’ willingness to pay for travel safety in terms of college quality, travel costs, and travel time in a model of college choice. The difference captures the cost of street harassment for women, since men in Delhi do not face such harassment but are expected to have similar concerns about other forms of safety.

I face three key identification challenges in this approach. First, I must define the set of colleges from which a student can choose. Second, I need to define the set of routes a student could take to each of the colleges in their choice set. Third, I need to determine the perceived safety of each travel route, which needs to be a measure that is likely to capture the safety perceptions of college students.

To address these identification challenges, I exploit the set-up of DU and assemble a unique dataset. DU is composed of 77 colleges that are spread across Delhi. The colleges vary in quality, with each college having its own campus, classes, staff, and placements. Admissions in DU are strictly based on students' high school exam scores. I infer students' comprehensive choice set of colleges using detailed information on 4,000 students from a survey that I conducted at DU. Using the mapping capabilities of Google Maps and an algorithm that I developed, I map students' travel routes by travel mode, including both the reported travel route and the potential routes available to students for every college in their choice set. Finally, I combine the information on travel routes with crowd-sourced safety data from two mobile applications. The first mobile application, SafetiPin, provides perceived spatial safety data in the form of safety audits conducted at various locations across Delhi. The second mobile application, Safecity, provides analytical data on harassment rates by travel mode. Together, the route and safety data allow me to assign a safety score to each travel route. Figure 1 shows the safety data and the reported travel routes for students of one college in my sample. 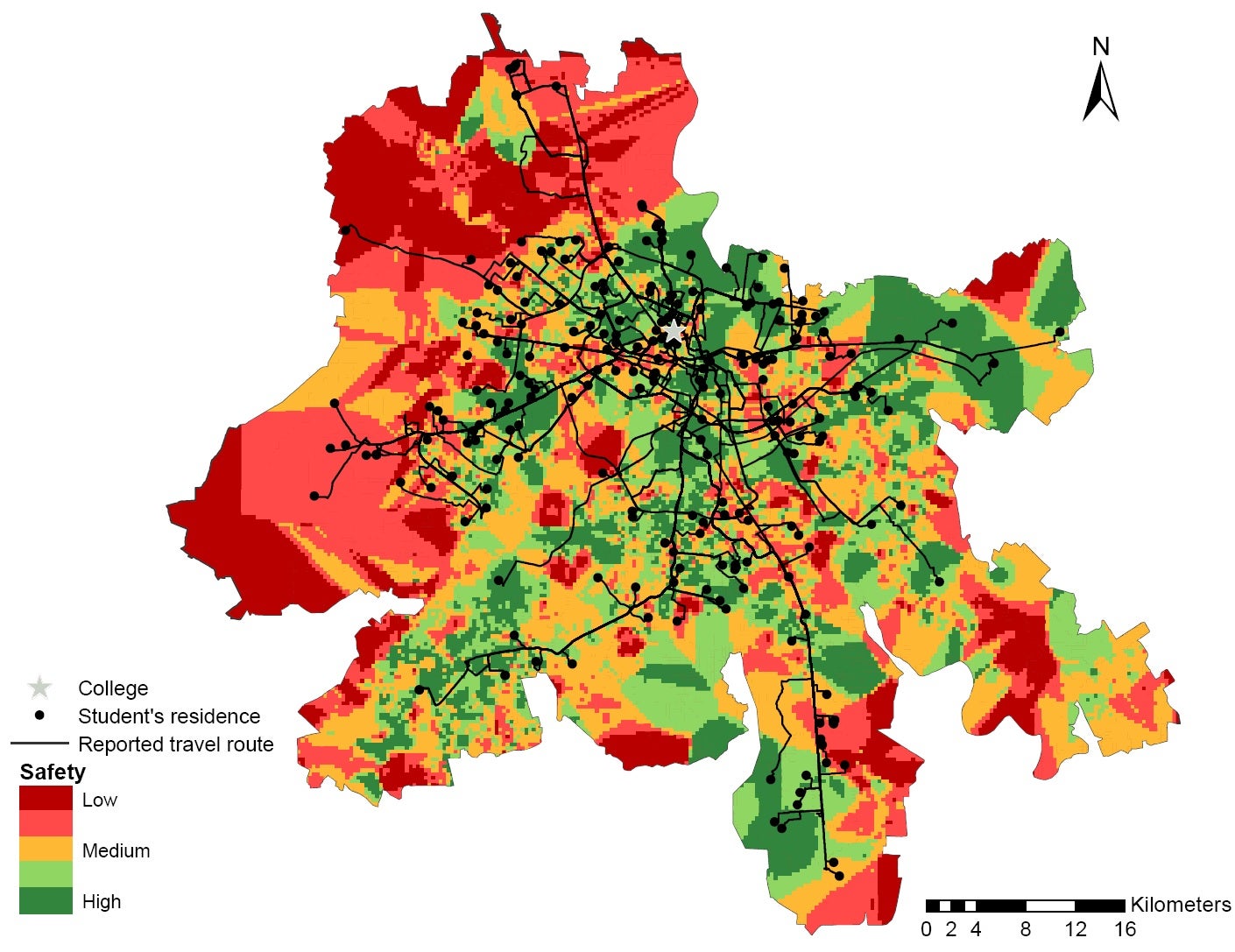 Women are willing to give up time, money, and college quality to feel safer
To estimate the magnitude of the students' willingness to pay for travel safety, I use a combination of structural econometric methods. I estimate students' indirect utility function using a nested logit model and heterogeneity in these preferences using a mixed logit model. The analysis uses spatial variation in students’ location, destination colleges, route choices, mode choice, and area safety.


Figure 2: Women and Men’s Willingness to Pay for Travel Safety

Implications
Using estimates from Sekhri (2014), I estimate that women's willingness to pay for safety translates to a 20 percent decline in the present discounted value of their post-college salaries. The findings speak to the long-term consequences of everyday harassment – perpetuating gender inequality in both education and lifetime earnings. While my paper focuses on the effects of street harassment on women's choice of college, these findings are relevant for other economic decisions made by women as well. For instance, the propensity to avoid street harassment could impact women’s employment decisions and explain India’s low levels of female labor force participation.

I also evaluate and interpret the impact of different existing and potential interventions that can alleviate the impact of street harassment on economic choices of women. I find that the first-best policy of making all travel routes safe for women reduces the college rank gap between men and women by 5 percent. While it is the ultimate hope, such an ambitious policy is hard to design and implement in the short or even medium-term. An alternative approach could be to design programs that improve women's preferences for safety through empowerment. These programs can take many different forms such as self-defense training initiatives by SheFighter in Egypt, or by encouraging women to reclaim public spaces as in the WalkAlone campaign by Blank Noise in India, or through information campaigns like ‘Stop Telling Women to Smile’ in several cities across the world. My analyses show that affecting women’s safety preferences has the same effect on closing the gender gap in higher education as the first-best policy, and it is more effective than subsidizing travel by safer modes for them. This suggests programs that empower women are one of the most effective and sustainable classes of policies to reduce the costs of street harassment.

Girija Borker is a Ph.D. Candidate in Economics at Brown University.