Be prepared! The effect of information ahead of urban floods in Mozambique. Guest post by Stefan Leeffers

This is the sixth in this year's series of posts by PhD students on the job market.

Floods are among the costliest and most recurring natural disasters, especially in urban centers around the equator. According to the International Disaster Database, from 2010 to 2021, floods affected 758 million people worldwide and resulted in total estimated damages of $583 billion. Urban flood risk will likely increase in sub-Saharan Africa due to rapid urbanization, overcrowding of vulnerable residential areas, and climate change trends. To prepare and warn citizens, many governments provide some form of disaster preparedness information, but we know relatively little about whether and how such policies change behavior.

In my job market paper, I use a randomized controlled trial (RCT) to test the effectiveness of low-cost, scalable information interventions. Quelimane, Mozambique’s sixth-largest city, is highly vulnerable to flooding. Together with the local authorities, I designed and carried out three interventions that bundled flood risk information with practical examples of mitigation strategies, such as keeping valuables safe and making home improvements. The interventions emphasize that it is essential to clear drainage canals of solid waste that can block them and exacerbate flooding.

The interventions were implemented in the months preceding Mozambique's 2021-2022 wet season. Using a cluster-randomized design across 300 urban communities, I compare a control group against three interventions that vary the saturation and medium of the information among residents:

T1: The community leader and two households receive the information through a video.

T2: The community leader and about 30% of the households in the community receive the information through text messages.

T3: The community leader and about 30% of the households in the community receive the information through video and text messages.

The experimental design enables me to test whether informing more people within a community facilitates collective action. The variation in information medium allows me to test the effectiveness of short messages relative to a more elaborate video.

How to measure behavior objectively?

To objectively measure behavior, the field team made observations about the presence of waste across pre-specified locations along drainage canals (every 50 meters) and streets (at randomly selected points) during the wet season. The team members also took photos in each place. I use a machine-learning algorithm to classify these 25,000 photographs and turn them into data. The employed Vision-Language model enables me to ask questions about any image, such as “Is there waste?” (Figure 1). The use of image recognition technology to classify cellphone photos in field experiments is novel and has the potential to be applied across a wide variety of topics.

I also analyze survey data collected from 3,000 households after the wet season to estimate treatment effects. Specifically, I measure the adoption and implementation of the suggested mitigation strategies at home and in the community. Common risks associated with survey measures are the possible biases introduced because of the respondents’ beliefs about appropriate behavior and the tendency to answer questions in a socially desirable way. The photo analysis addresses these concerns. Moreover, the paper discusses survey questions that check for biased responses and survey methods less prone to those risks.

Providing information significantly reduced the presence of flood hazards. Figure 2 shows drainage canals and surroundings were between 0.29 and 0.51 standard deviation cleaner across the treatment groups as measured by both objective outcomes. This impact is equivalent to a reduction of 8-15% of photos with waste in and around drainage canals. There is no impact away from the drainage canals, suggesting that targeted efforts were made rather than general solid waste management improvements. Surprisingly, I do not find any statistically significant difference in the effect of information when delivered to a large percentage of households. 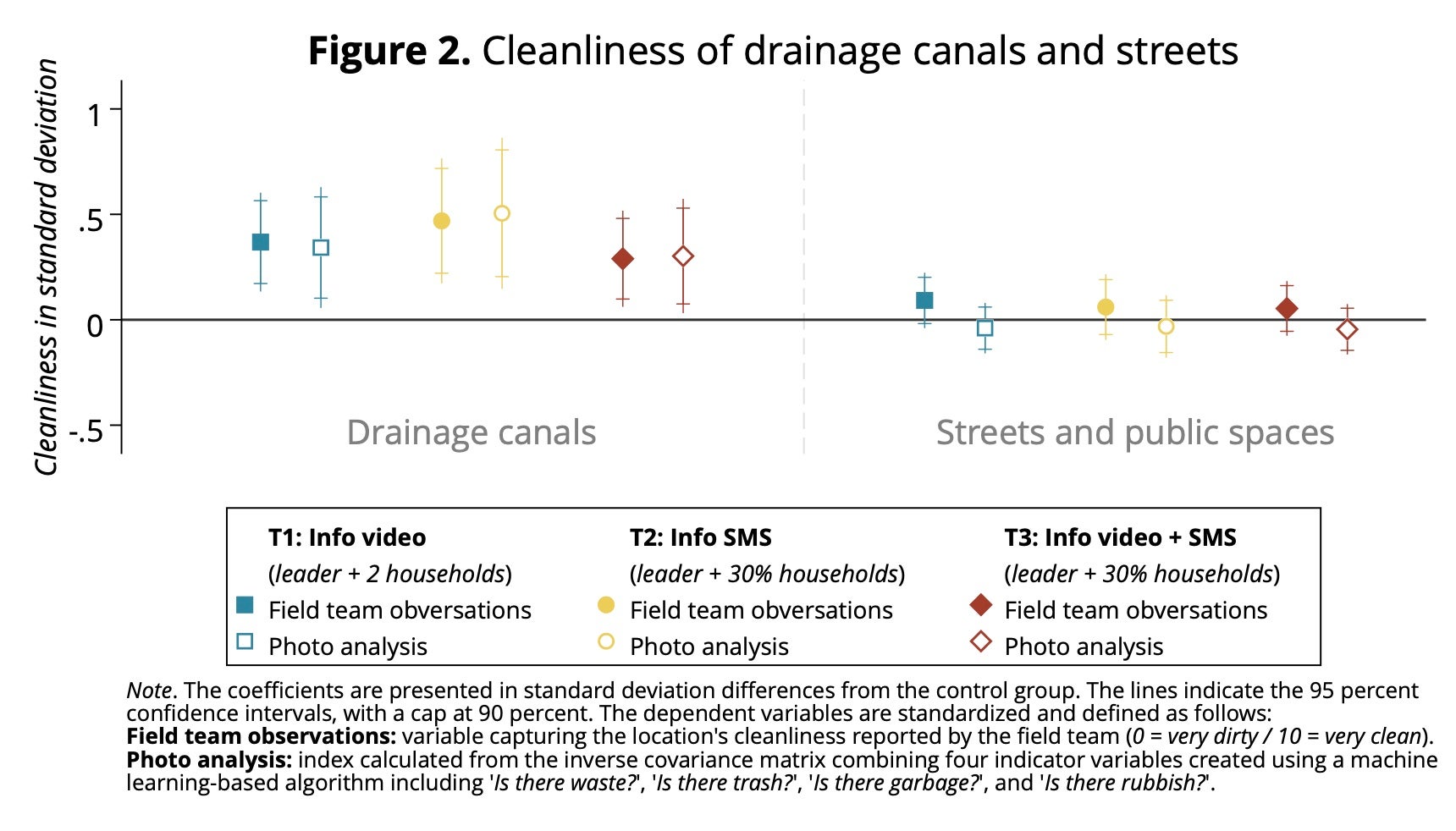 The findings using survey data confirm the photo analysis results. I find that providing information increased participation in cleaning and reports of community-level action. Protective action-taking at home and self-evaluated resilience to flooding also improved due to the interventions. On average, targeted families in treated communities were 22-26% more likely to have implemented the suggested mitigation strategies at home. I do not observe meaningful differences between the information mediums.

Spillovers within and across communities

Collective action is essential to address flood hazards, such as waste, because of the positive externalities of acting and the threat of free riding, while acting alone is not enough. Therefore, I carefully consider these externalities within and across communities. To measure indirect treatment effects on non-targeted households within treatment communities, I analyze survey data from randomly selected households that were not targeted for information. These households also experienced positive treatment effects on flood mitigation behaviors. While these indirect effects are not always significant, they are consistently about half of the direct impact on treated families. This finding suggests that information about risk and mitigation measures diffuses among neighbors, generating positive spillovers and facilitating community-level action.

This study is relevant for policymakers for two main reasons. First, digital tools, such as smartphone photos, can be used by policymakers to identify vulnerabilities and improve resilience to climate shocks. The photo analysis shows that recent innovations in artificial intelligence and machine learning can be leveraged to obtain accurate and timely information about important climate risk-related topics.

Second, lessons learned from this experiment support and inform communication efforts by policymakers to build resilience to natural disasters in the developing world. Of the urban households in Sub-Saharan Africa, 85% own a television and 89% use a cellphone daily. Moreover, the marginal costs of a text message are close to zero. Therefore, providing risk information bundled with examples of mitigation strategies can be a powerful and cost-effective way of improving the resilience of the urban poor.

Future work should focus on expanding this research across scale and time. The findings suggest that providing information more widely is not necessarily better, possibly because of free riding, but what happens when these interventions are tested at scale, and everyone is targeted? In the paper, I also discuss how the effect on awareness about flood risks declines after the wet season. Repeating information campaigns seems necessary. Studying longer time horizons could help us understand threats such as declining attention and unsuccessful implementation of suggested actions during past floods.

Stefan Leeffers is a Ph.D. candidate in Economics at Nova School of Business and Economics. Learn more about his research at: www.stefanleeffers.com.