Building Grit in the Classroom and Measuring Changes in it

About a year ago I reviewed Angela Duckworth’s book on grit. At the time I noted that there were compelling ideas, but that two big issues were that her self-assessed 10-item Grit scale could be very gameable, and that there was really limited rigorous evidence as to whether efforts to improve grit have lasting impacts.

A cool new paper by Sule Alan, Teodora Boneva, and Seda Ertac makes excellent progress on both fronts. They conduct a large-scale experiment in Turkey with almost 3000 fourth-graders (8-10 year olds) in over 100 classrooms in 52 schools (randomization was at the school level, with 23 schools assigned to treatment).

The intervention
Teachers in the treatment schools received training on how to adopt the idea of grit as part of their overall teaching philosophy, including a shift to praising effort and attitude towards effort rather than just outcomes, and provided with material including animated videos, mini case studies, and classroom activities. Typically teachers received a minimum of 10 sessions of training, lasting 12 weeks. The material emphasized: i) the plasticity of the human brain rather than the notion that ability is fixed and innate; ii) the role of effort in enhancing skills and achieving goals; iii) the importance of interpreting failures in a constructive way to learn from; and iv) the importance of goal setting. Students are encouraged to set goals, exert effort to work towards these goals, and to avoid interpreting immediate failures as a lack of innate ability or intelligence – leading to the first part of the paper’s title “Ever fail, try again, succeed better”.

Measuring Grit
A key innovation in the paper is then to develop and use an incentivized real effort task to measure grit, rather than just relying on student self-reports. The students were given a grid of numbers, and had 1.5 minutes to find three pairs of numbers that each summed to 100. They played the game in five rounds, and before each round had to choose between an easy task (left picture below) and hard task (right picture). After each round is completed the experimenters check their sheets and circle either “succeeded” or “failed”, before the choice for the next round is made. The easy task yielded 1 prize in the case of success, and 0 for failure, and almost everyone was able to do it. The hard task yielded 4 prizes in the case of success, and 0 for failure, with only about one-quarter of students getting this right. 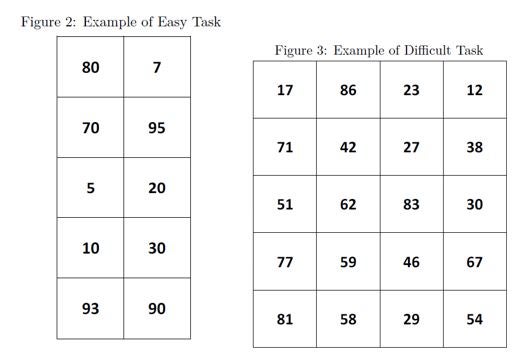 For the first round, fifty percent of the students are randomly assigned to the difficult task, while fifty percent get to choose. Then for all subsequent rounds individuals get to choose which game to play round by round. They find treatment has no impact on performance in the first difficult game, which is nice, because they can then look at those who failed, and see who choose to try again.

Then a final nice addition is to tell the students that they will come back in 1 week to play the game again, and that they have to choose now which game they will play in a 1 week, but that they will have access to an exercise book to practice the difficult questions in between if they want. As in the first round, 50 percent are randomly assigned to the hard game at follow-up, while 50 percent get their choice.

Can you exhibit too much grit?
This was another point that came up in the discussion around the book Grit when it came out. In this context, the question is whether the students are profit-maximizing to persevere with a difficult task that has lower odds of success, or rational to give up? The authors find a positive and significant effect on the total payout students get, and then tries to predict their individual profit-maximizing decisions given baseline characteristics and finds treated students are more likely to choose the profit-maximizing choice in later rounds.

Caveats/Critique
I very much like the measurement task here and the evidence that grit can both be taught and make a difference on outcomes we care about like test scores. Some things to consider:

I definitely look forward to seeing the revised version of the paper, and this intervention seems worth replicating and extending in other contexts. It also seems interesting to think about how you would modify this incentivized grit measure task to use with adult populations.

Thanks for sharing this study David. Grit is an interesting quality so learning to develop it is important, especially in today's world of education and work.