Can providing information to parents improve student outcomes? 4 recent papers show it can (Chile, Malawi, and US x2)

My oldest child started middle school this year, and I suddenly started receiving emails every other week with updates on his grades. I’d never received anything like this before and was overwhelmed (and a little annoyed) by the amount of information. Someone told me that I could go to some website to opt out, but that seemed like too much work. So I continue getting the emails. And sure enough, now I follow up: “Hey, are you going to speak to your teacher about making up that assignment? Email her if you don’t manage to talk with her today.” (I'm sure my son loves it.) Despite my initial aversion, the emails seem to work.

So I was interested recently to speak with Peter Bergman, a professor at Teachers College, about his paper “Parent-Child Information Frictions and Human Capital Investment: Evidence from a Field Experiment Investment.” In an experiment with high schools in Los Angeles, researchers provided information to parents about missing assignments and grades, just about every other week. (Bergman noted that especially for immigrant parents, grades were much less useful than missing assignments, as not all parents were familiar with the US’s grading system.) The information was provided via text message, email, or phone calls. 79 percent of parents requested text message, 13 percent requested email, and just 8 percent wanted a phone call. One key finding: “Parents have upwardly-biased beliefs about their child’s effort in school: when asked to estimate how many assignments their child has missed in math class, parents vastly understate.”

But at what cost? “Contacting parents via text message, phone call or email took approximately three minutes per student. Gathering and maintaining contact numbers adds five minutes of time per child, on average. The time to generate a missing-work report can be almost instantaneous or take several minutes depending on the grade book used and the coordination across teachers. For this experiment it was roughly five minutes. Teacher overtime pay varies across districts and teacher characteristics, but a reasonable estimate prices their time at $40 per hour. If teachers were paid to coordinate and provide information, the total cost per child per 0.10 standard-deviation increase in GPA or math scores would be $156” (as compared to $538 for a recent intervention providing financial incentives for students).

Subsequently, Bergman has been working on a follow-on trial, where the texts are automated (at a marginal cost of 0.2 cents -- or $0.002 per text):

In this study, 28,000 households were randomly assigned to one of three treatments (or business as usual). All treatments were by mail, sent about 5 times per year. Here are the results: 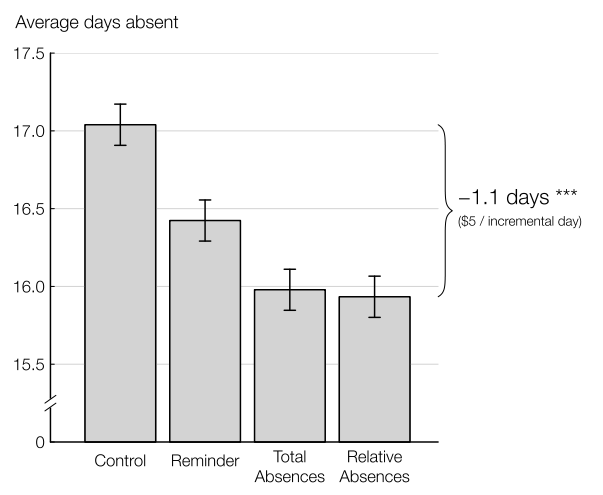 And here’s a tidbit, along the same lines of Bergman’s finding that parents tend to overestimate their children’s effort: “A pilot survey of parents of high-absence students shows that parents underestimated their own students’ absences by a factor of 2 (9.6 estimated vs. 17.8 actual).”

Dizon-Ross has three main findings: Study #4: Berlinski et al.: “Reducing parent-school information gaps and improving education outcomes: Evidence from high frequency text messaging in Chile” (2016)
Finally, Berlinski et al. have an experiment in Chile that “offered each participating parent the chance to receive high frequency information about their selected child via text message (SMS messages).” What did the texts provide? “Attendance, behavior and mathematics test scores of their child. In addition to the information SMS messages, parents of both treatment and control groups received general SMS messages about school meetings, holidays and other general school matters throughout the year.”

What did they find? “The SMS treatment had immediate impacts on grades and on grade progression. After the first four months of treatment (at the end of the first school year), average math grades and cumulative math GPA rise by 0.08 standard deviations for SMS treatment students relative to control students. The probability of earning a passing grade in math increases by 2.8 percentage points (relative to a mean of 90%). Exposure to the SMS treatment increases the chances of attending school for more than 85% of the time by 6.6 percentage points. The 85% cutoff is one of the necessary conditions for grade progression. The share of students reported to have extremely bad behavior (e.g. bullying, or physical/verbal violence) falls by a substantial 1.25 percentage points, or 20% relative to the mean rate of bad behavior. And exposure to treatment increases the probability that a student passes the grade at the end of the year by 2.9 percentage points, virtually eliminating grade failure among marginal students.”

Additional bits: A recent survey of thought leaders from the International Literacy Association highlighted that “parent engagement” was very important but not very hot. The evidence above – taken together -- suggests that (a) parents indeed do not tend to have accurate information about their school-going children’s effort and performance, and (b) providing that information can help parents to help their students with measurable outcomes. Maybe this area should be hotter than it is. 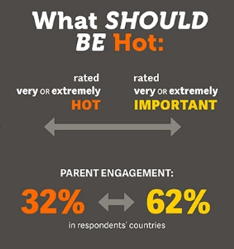 This also serves as a reminder that there is significant complementary evidence from high-income countries with relevance to middle- and low-income countries. Most reviews of the education literature with an aim to providing lessons for middle- and low-income countries (including mine) focus exclusively on evidence from “the developing world” or “in developing countries” (exhibits a, b, c, d, and e). While I understand the need to limit scope for practical reasons, such an exclusive focus eliminates highly relevant evidence from the process of supporting evidence-informed policy.
Topics
Education
Countries
Chile
Malawi
United States

Wow, this is super-interesting! These seem like pretty huge effect, and quite cost-effective. I wonder if there are any studies looking at the longer-term effects of these communication interventions? The worry is that at some point the communications lose their novelty and parents find them easier to ignore.

Great question. As far as texting parents, I'd say it's a bit of an open question in terms of the effects more than a couple of years out. Currently have one trial past year one and still ongoing; hopefully we'll be permitted to collect the data down the line.