Investment in public infrastructure is expected to be an important vehicle to attain the Sustainable Development Goals by 2030. Despite economic research illustrating that large infrastructure - once built and in use - brings economic development and improves living standards, millions of people are not able to enjoy these benefits. In fact, The World Bank is directing as much as 40% of its portfolio to large infrastructure development in low and middle-income countries (LMICs), who are particularly struggling to effectively provide public goods.

However, public expenditure debates continue to revolve around the “how much”, while the key question is “how” to effectively deliver public goods. Even when finance is available, important challenges remain. New studies reveal that mid-construction abandonment is common in LMICs, which creates significant waste of public resources with high opportunity costs. What is not clear is which are the effects on economic welfare and wellbeing of such inefficiencies. In my job market paper, I demonstrate that the consequences of unfinished infrastructure projects can be serious: they can kill.

Expansion of Sewerage Infrastructure in Peru

In my job market paper, I evaluate the effects of a nation-wide expansion of sewerage infrastructure that took place in Peru on the mortality of children under the age of five (under-fives). Under-fives are the most vulnerable segment of the population because of their weak immune system and poor awareness of health risks. Also, under-five mortality was the outcome that this public intervention ultimately aimed at improving. Half of Peru’s households lacked sewerage connectivity in 2005. Premised on the fact that sewerage systems improve public health, the Government of Peru invested USD 3 billion on starting 5,000 sewerage projects between 2005 and 2015. My research was motivated by cases of excavations infesting neighbourhoods with mosquitoes and under-fives drowning in ditches as deep as 2 meters filled with stagnated water.

The roll-out of sewerage projects in Peru provides a particularly good opportunity to evaluate the effect of infrastructure development. I construct a panel dataset of more than 1,400 districts spanning 2005-2015 by combining novel administrative data, vital statistics and spatial data. Specifically, I rely on detailed project-level data on expense plans and timing of expenditures to identify the number of projects unfinished and those completed in a given district. Moreover, Peru’s natural geographic variation lends itself to the instrumental variable utilized in this study.

Because I encounter project placement bias (i.e. more projects were started by richer districts with lower mortality rates), I rely on an instrumental variable methodology.  I construct an instrument capturing how sewerage diffusion would have evolved over time had project placement been based solely on cost considerations. I rely on the fact that geography-driven characteristics (i.e. land slope, elevation, area and river density) affect a district's technical suitability for low-cost sewerage projects. Subject to a time-variant nation-wide budget constraint, I predict that the government of Peru would have allocated more projects to “cheaper” districts and would have done so earlier in the period of study. The identification assumption is that no other factors affecting mortality rates (e.g. citizen's preference for preventive healthcare and other infrastructure and policies) changed over time along the same spatial lines as the predicted allocation of projects. I control for time-invariant impacts of geography on health through district fixed effects and annual shocks through year fixed effects. As a validity check, I find that my instrument is not related to other types of infrastructure development, residential sorting, selective migration or geography-specific mortality trends.

The maps below depict the actual (right) and predicted (left) total number of projects started in each district of Peru between 2005 and 2015. In 2005, my instrument allocates one project in each of the “cheapest” districts (northeast Amazon region) until the budget is exhausted. I follow the same procedure for the following years until a district receives a maximum of 5 projects (median of the distribution of actual project allocation). Projects that would have been allocated to “cheaper” districts that already hit the maximum are placed in slightly more “expensive” districts (west coast). Therefore, by 2015, the “cheapest” districts would have received up to 5 sewerage projects, while the “more expensive” districts would have received fewer or none. This creates a predicted allocation roll-out that provides variation across districts and years. The first-stage estimation proves the relevance of the instrument. 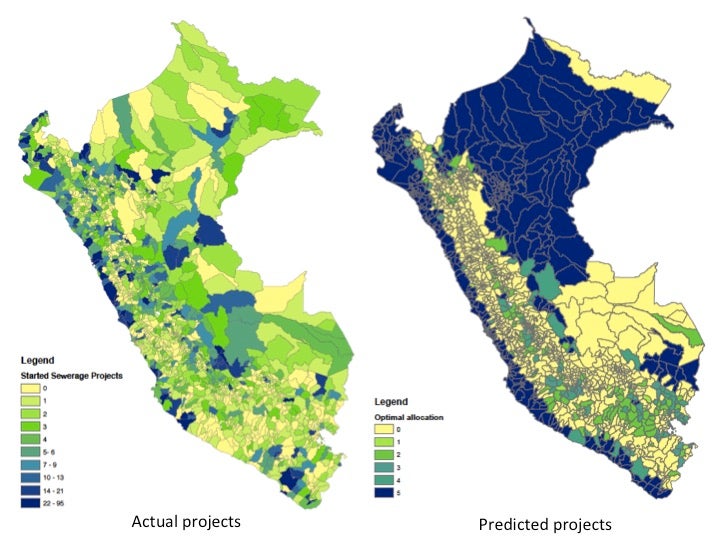 I find that with every additional sewerage project that was launched, under-five mortality increased by 6 percent over the baseline. This striking result is linked to the fact that unfinished projects exposed the population to hazards. The primary determinants of this mortality increase are waterborne diseases and accidents. Notably, I find no effect of unfinished sewerage projects on the mortality caused by other diseases and complications unrelated to infections or external hazards. 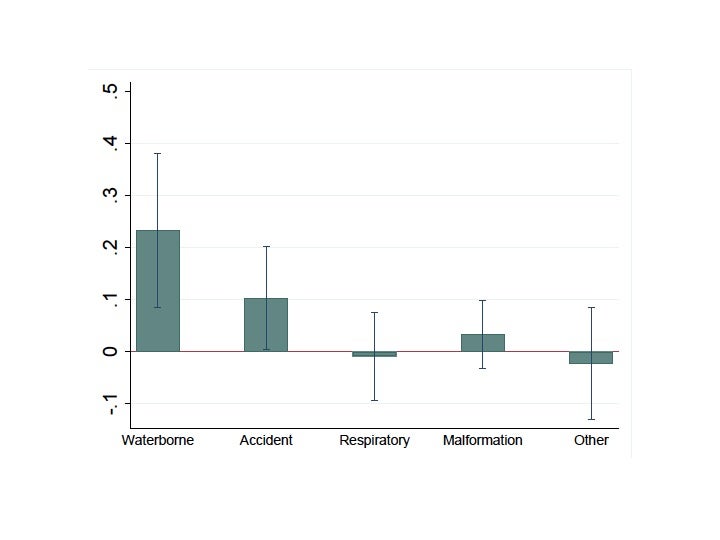 Delays and mid-construction abandonment of sewerage projects exacerbated the hazards posed to children. Strikingly, between 2005 and 2014, only half of the started projects were ever completed. On average, abandoned projects had 40% of the contractual funds disbursed, revealing a great waste in public expenditure. Interviews with local engineers indicate that an average sewerage project takes one year to be completed, but delays are frequent. From the pool of projects started after 2005, the fastest projects were completed after 2 years (only 10%) and more than 50% of the projects took more than 5 years to be completed. I find that on average, an extra year that a district was exposed to unfinished sewerage projects increased the average annual growth of under-five mortality by 16 percentage points.

What can Governments and Donors do?

My results suggest that to fully understand the effectiveness of large infrastructure to improve living standards, governments and donors must take into account the consequences of the whole developmental process. Unfinished infrastructure projects (aka white elephants) are a common sight in LMICs. Overall, 13 percent of the expenditure in sewerage systems in Peru between 2005 and 2015 was allocated to projects that were never finished. A back-of-the-envelope calculation suggests that this waste equals one fifth of Peru’s education expenditure in 2015, which reflects the high social opportunity cost of project non-completion.

While the wasteful government expenditure on never-to-be-completed projects is worrisome, it is even more disconcerting that this inefficiency kills children. There are relatively simple steps that may help reduce this problem. Donors can offer support in infrastructure development by strengthening government delivery institutions; specifically its capacity to monitor and enforce health and safety measures during the implementation. Furthermore, donors can generate incentives for LMIC governments to impose and enforce rules to ensure that existing projects are finished before starting new ones. A dialogue with senior policy-makers revealed that the Government of Peru is starting efforts to closely monitor the physical progress of infrastructure projects, which is a necessary first step to get rid of the dangerous white elephants.

Antonella Bancalari is a PhD candidate at the London School of Economics and Research Officer at the Institute for Fiscal Studies. More details about her research can be found on her personal website.

Very interesting and helpful research effort. As white elephants also grow in sectors other than sewerage, I believe that Antonella's approach should be expanded to other types of infrastructure.
Congratulations on the great work done!

Thank you very much! Indeed more research needs to be done on "white elephants". Both on the consequences in other sectors and their determinants.

Biases on infrastructure project placement mirrors how state’s planning capabilities set up its own allocative efficiency framework. Some are based on BCA metrics another are just skewed towards local constituencies’benefits. District analyses – as Antonela’s approach – empirically shows the imbalance between poor and richer jurisdictions and the unequal rate of sewages project placement on them. Latin American governs should refurbish this allocative framework to properly addressing geographical inequalities, setting out to trigger development on underserved communities rather than continuously attending the same jurisdictions.