Conditions work! But are they a good thing? (Part I)

One of the questions discussed at the recent World Bank workshop on the "Second Generation of CCT Evaluations" (website, complete with at least some of the presentations, here) was the role of the first C in the performance of the CCT: how important is the condition in accounting for the outcomes of conditional cash transfer programs? Are we just wasting time and resources by monitoring and enforcing conditions, when simply giving out the cash with no strings attached would do an equally good – or perhaps an even better – job?

One thing that was emphasized at the session we both took part in was the need to be clear about what exactly the “job” of a CCT is. There are at least four different types of outcomes that CCTs may affect: (i) intermediate service use indicators, like school enrollment and attendance, or visits to health centers; (ii) ‘final outcomes’ in terms of human capital accumulation, such as learning achievement or health indicators; (iii) short-run welfare, which may be variously captured by things like family income and expenditures, or the inverse of risky behaviors; and finally (iv) long-term welfare, which may be measured by the child’s future income, wealth, mental wellbeing, and happiness.

Unsurprisingly, most of the evidence from CCT evaluations refers to category (i) indicators: conditioning the receipt of a transfer on school enrollment, a minimum rate of attendance, or a certain set of interactions with health service providers does appear to raise the corresponding intermediate service use indicators by more than giving out the same amount of cash unconditionally. A more detailed summary of this evidence is below, but let’s discuss quickly the fact that this is consistent with the basic theory that underlies CCT programs. There are fancier ways of modeling this, but the simple diagram below illustrates the essence of what is going on. If a family consumes an amount of schooling given by S0 when their budget constraint is AB, you can raise the schooling demanded from S0 to SC by offering a cash transfer (equal to BE) conditional on a minimum attendance rate of SC. Such a policy shifts the family’s budget constraint from AB to ACDEB. A child or family (and we gloss over this particular intra-household decision-making issue in this post, but there is plenty to say about them elsewhere) with indifference curves such as the ones drawn in the Figure is better off at D than at F.

This increase in schooling (SC – S0) can be broken down into an income effect (SU-S0), and a substitution effect (SC-SU). The first part is what would obtain from an unconditional cash transfer, which shifted the family’s budget constraint out to the line that goes through EDF’. If education is a ‘normal good’, or if it is a profitable investment but the family is credit constrained, the cash by itself would have some effect. The condition adds a “distortion” that can raise the quantity of schooling demanded further, to SC. The key question is whether that “distortion” is a welcome one or not. However, we need a bit more patience before we get to that issue. 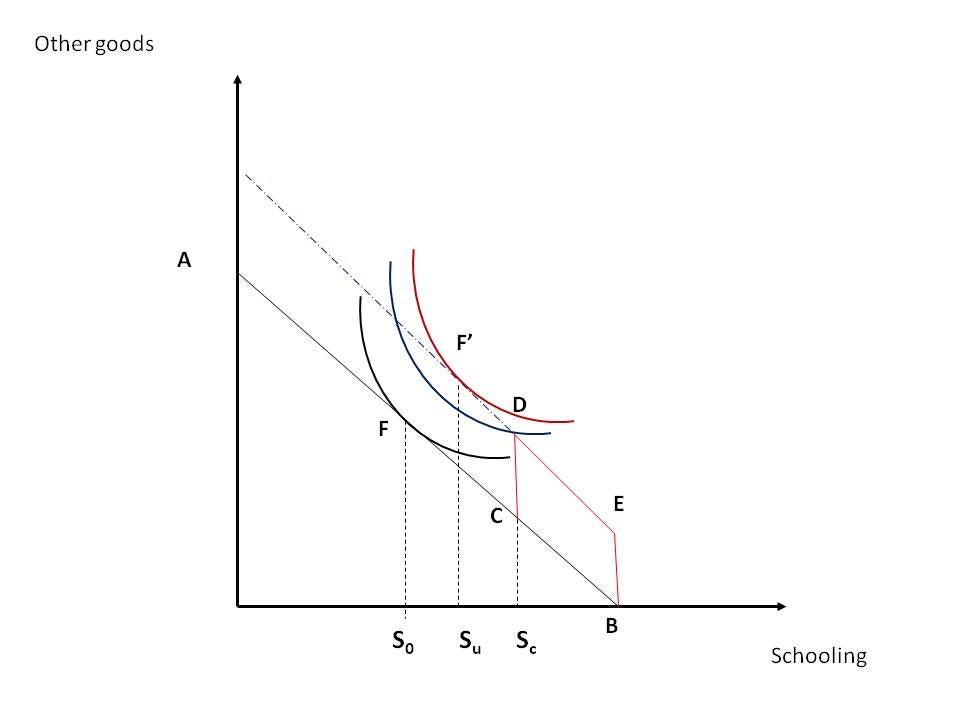 (If you cannot see this graph easily, please click here for a better view.)

Elementary theory could predict the nature and direction of these two effects. But their relative sizes, i.e. how much further a CCT would increase school enrollment over and above an equal-sized UCT, is an empirical matter and, as noted at the conference, one on which there is now a fair amount of evidence. Some of the earlier work relied on discrete choice models of child occupational choice, estimated on a single cross-section and combined with a microsimulation of the conditional transfer. This paper by Bourguignon, Ferreira, and Leite (2003) on Brazil’s Bolsa Escola – the precursor of Bolsa Família – was one of the first to suggest that the substitution effect might be much more important than the income effect in driving CCT impacts on enrollment. More or less the same qualitative finding was there for Mexico in this paper by Todd and Wolpin (2006). Quasi-experimental evidence from Ecuador and Mexico generally went in the same direction: in Ecuador, Schady and Araujo (2008) found that enrollment increased a great deal more among families who perceived the program as conditional than among those who thought there were no conditions. Ditto for de Brauw and Hoddinott (2011) in Mexico.

Despite the theory that suggested conditions would have an effect on behavior and the evidence summarized above, the debate about whether conditions were needed continued with vigor. In 2010 alone, it was not hard to come across many pieces in traditional media and the blogosphere that questioned the need for the conditions in CCT programs by stating either that there was very little evidence that conditions had any impact or that the evidence was not convincing (two examples can be found here and here). In our opinion, there were two reasons for this: emergence of experiments in development economics made everyone more skeptical of non-experimental evidence. Second, however, and perhaps as important, was the fact that all the evidence we had was from Latin America (LAC). If we were to apply lessons from these programs to poorer parts of the world, we would need to start establishing the relative sizes of these ‘income’ and ‘substitution’ effects elsewhere. Fortunately, experiments that pitted CCTs against UCTs in three African countries are now emerging and, in the process, both considerably strengthening the evidence base and more or less confirming the earlier findings.

In the Zomba Cash Transfer experiment in Malawi (Baird, McIntosh and Özler, 2011), the reduction in the drop-out rate in the CCT arm was more than twice as large as that in the UCT arm. Furthermore, there was evidence of differential learning: English reading comprehension was substantially higher among those for girls in the CCT arm than those in the UCT arm. This does not appear to be a one-off finding, either: another RCT in Burkina Faso (Akresh, de Walque and Kazianga, presented at the workshop - no working paper yet) also finds a greater enrollment impact in the CCT arm than in the UCT treatment – which they suggest is driven by the family’s investments in the youngest children, aged 7-8, who would have been late to start school otherwise. Another eagerly awaited study from Morocco (by Behnassine, Duflo, Dupas, and others?) did not shed light on the relative effectiveness of CCTs vs. UCTs: it seems that, based on the presentation of initial findings by Duflo, the families and the children in different treatment arms were confused as to whether the cash was conditional and, if so, on what.

These new findings are both more credible and more nuanced than at least some of the earlier LAC studies, in large part because identification is cleaner (however, scalability remains an open question as these are small experiments rather than the evaluations of national programs in LAC). There is no longer a sense that the conditions are doing all the work, as the early work on Brazil seemed to suggest: unconditional cash transfers do improve these outcomes, meaning there is an "income effect." But it also seems rather clear now that the "substitution effect" is relatively large: you get a big bang for your buck in terms of enrollment and attendance – and possibly even of achievement – if you condition the transfers on school attendance. In Malawi, CCTs were so much more cost-effective than UCTs in improving schooling outcomes that the contest wasn't even close. Furthermore, as Jere Behrman suggested at the same conference -- citing some preliminary evidence from an experiment in Mexico, you may get even higher impacts on learning if you condition the transfers on achievement rather than attendance.

So, is that the end of the debate on conditions? With theory on the side of CCTs and backed-up by (both experimental and non-experimental) evidence from Africa and Latin America, are we ready to declare a victory for CCTs over UCTs?  Our answer is an emphatic “no.” Category (iii) and (iv) outcomes – short- and long-run welfare – also matter: in fact, they are the final outcomes we are interested in. In Part II of this post (tomorrow), we analyze the theory and evidence on how CCTs and UCTs affect other outcomes (such as teen pregnancy, early marriage, health, savings, and physical capital accumulation) and contrast them with the evidence presented above on human capital accumulation. Only then we can make a more informed judgment on relative welfare improvements caused by these two types of cash transfer programs. Thanks. This is exactly the topic covered in Part II of this post. We at least start on the path of doing those comparisons...

Very interesting post. Does anybody tell me how these programs are financed? Are they financed by public domestic funds or by external funds? May they considered as ODA?

In LAC, almost always domestic funds, as far as I know.