This is the fifth in our series of posts by PhD students on the job market this year.

Air pollution in Delhi in the winter is the worst in the world. The haze is so bad that flights have been cancelled, schools have been closed, and the measured level of particulate matter regularly exceeds the WHO recommended limits by more than 1,000%. A major source of the pollution that creates the winter haze that engulfs Delhi every November and December is crop residue burning. Farmers throughout India, but especially in Punjab and Haryana, burn the residue that remains on their fields after the annual rice harvest in order to prepare their fields to plant wheat. Estimates suggest that 40% of the particulate pollution in Delhi in November and December is due to these fires.

Pollution in Delhi has progressively worsened in the last fifteen years in part because of a substantial increase in the number of cropland fires. My job market paper examines how the implementation of the Mahatma Gandhi National Rural Employment Guarantee Act (NREGA), contributed to this increase in cropland fires and thus to the air pollution problem in India. I provide evidence that the success of this program in raising wages in rural India had the unintended consequence of increasing the number of fires.

NREGA is the world’s largest anti-poverty program and provides a work guarantee to residents of rural districts in India. It is representative of a common strategy governments use to increase incomes in which people work in return for some combination of cash and/or aid. Under NREGA, residents of rural districts are provided employment on demand on public works projects. To qualify for NREGA, low-skill labor must be at least 60% of the cost of a project. Low-skill wages are paid by the Federal government. NREGA was rolled out between 2006-2008 with roughly one-third of districts added per year. Existing work has shown that NREGA increased the equilibrium wages paid to low-skill labor and may have reduced labor supply to the private market as workers chose to work in NREGA projects.

Why would NREGA lead to an increase in fires?

Farmers use fires to clear their fields after harvest because some of the non-useful parts of the harvested plants are left on the field as residue. In India this residue needs to be removed before they can plant the next seasons crops. If farmers have to pay higher wages to hire laborers to harvest their crops, they may instead choose to use labor-saving mechanical combines. These combines leave substantially more residue (between 80% and 120% by some estimates) on the fields than harvesting by hand. As a result, farmers who harvest with combines have more residue to remove from their fields. The Indian Ministry of Agriculture estimates that burning this residue is the least expensive means of removing it. NREGA would lead to more fires if increasing wages caused farmers to mechanize the harvest and use more fires to clear the resulting residue.

Did NREGA lead to an increase in fires?

Yes. I show that the implementation of NREGA in a district increased the number of cropland fires by between 9% and 21%. I do this by taking advantage of the sequential roll-out of NREGA across the country. That allows me to use a difference-in-differences framework and data from NASA satellites on the number of monthly cropland fires in each district of India from 2003-2014 to measure how fires changed after NREGA.  I measure a count of fires per district-month so I use a Poisson fixed effects specification with district and month by year fixed effects and controls for weather in the month of observation. In each year of treatment, 130-200 districts are treated and the remaining 350-430 act as controls. I follow the suggestion of recent literature on the difference-in-differences specification and also estimate an event study with leads and lags of treatment in figure 1. The critical assumption in this framework is that the treatment effects are constant across cohorts (but not necessarily time). Crucially, as figure 1 shows, I also find no evidence of pre-trends in the number of fires prior to the implementation of NREGA. 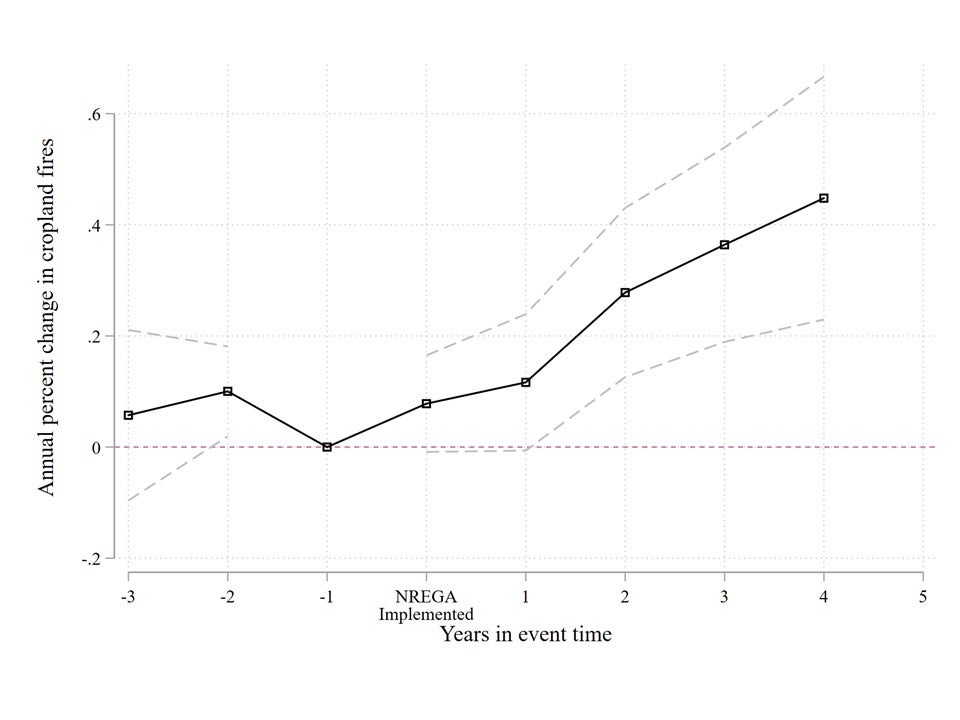 I hypothesized that NREGA increases cropland fires by leading to higher wages for agricultural laborers so farmers to choose to harvest with labor-saving mechanical combines. If this hypothesis is correct, I expect to see a greater increase in cropland fires in areas where farmers find mechanization easier. To test this, I collect data from the Indian Agricultural Input Survey on the pre-NREGA level of a number of district characteristics (like the number of combines) that might predict mechanization to be easier. I then construct an index of mechanization that ranks districts based on the feasibility of mechanizing in that district.

Did the increase in fires increase pollution?

Ultimately, we care about cropland burning primarily because of its potential impact on air pollution. More fires might be bad for agricultural productivity but burning rises to the top of the policy agenda because it is a major cause of pollution in Delhi. Fortunately, satellite data allows me to measure pollution from biomass burning as well as the occurrence of cropland fires.

Using NASA data on the emissions from biomass burning I can use the same difference-in-differences approach to measure how emissions rates changed after NREGA was implemented. I find that emissions rates of black carbon, organic carbon, and SO2 all increased by between 35% and 50% after the implementation of NREGA. 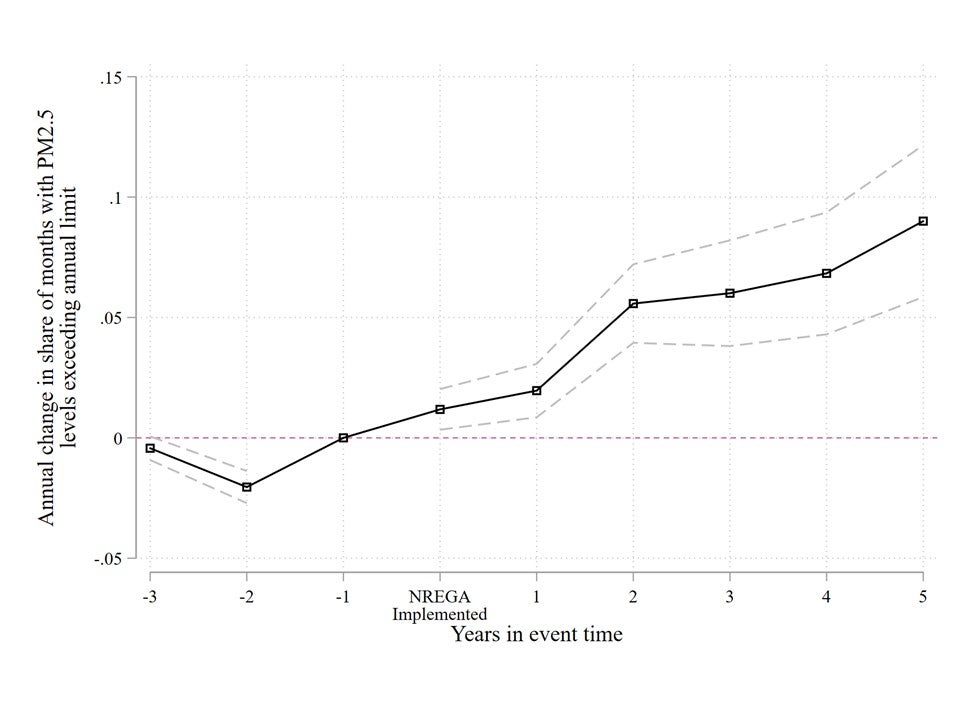 Based on the concentration of these and other precursor pollutants I am able to construct a measure of PM2.5 at the district month level. Because PM2.5 has such large negative health consequences, the Indian government, along with many others, set a standard for the level of PM2.5 concentrations over a 24-hour period. They recommend that concentrations not exceed 40 µg/m3. Using my constructed measure of PM2.5 I show that NREGA increased the frequency with which the average district exceeded this standard by 11%.

How do you know the increase in fires was due to higher wages?

NREGA induced many changes in the rural labor markets in India and it is possible that the increase in fires is due to something besides the increase in mechanization. Though my results suggest mechanization played an important role I cannot rule out all other causes. But there are two common alternatives that I can rule out. I find no evidence that the total area planted or tonnage produced of crops that typically use fires after harvest increased after NREGA. NREGA likely did not increase fires by increasing production. Further, although NREGA may have provided implicit insurance that led farmers to plant riskier crops, I find no evidence that the crops they may have switched into are associated with the use of fires.

Reducing crop burning is an important component of reducing air pollution in India. My results suggest the number of fires increased because mechanization increased the amount of residue that farmers must remove after harvest. Helping farmers develop non-burning ways to remove this residue will be important in decreasing the use of crop fires and reducing air pollution.

Patrick Behrer is a PhD student at Harvard University.