This is the fourteenth in this year's job market series.

Improving access to basic financial products and services can reduce poverty and vulnerability to shocks by helping households smooth consumption and by lowering transaction costs (Beck et al., 2007; Honohan, 2004; World Bank, 2008). Mobile money, a recent innovation in some parts of the developing world, has played an important role in changing the financial inclusion landscape in the last decade. Kenya's mobile money platform M-PESA, introduced in 2007, has been by far the most successful experience among Sub-Saharan economies adopting this innovation.

My job market paper examines the impact of mobile money use on the saving behavior of rural Kenyans. I disentangle the mechanisms by which mobile money could impact household savings, both theoretically and empirically, and estimate the net effect. I suggest two main potential channels through which mobile money affects the saving behavior of its users: As a storage mechanism, it reduces the cost of saving and creates an incentive to save, but as a money transfer mechanism, it can reduce the incentive to save, when future needs can more easily be met from alternative resources.

Firstly, M-PESA is a safe and cost effective means of storage. The large and widespread network of M-PESA agents, which provide cash-in and cash-out services (see Figure 1), were hugely more convenient than existing banks, and withdrawal fees are competitive with other savings technologies. This creates an incentive for its users to engage in precautionary savings. 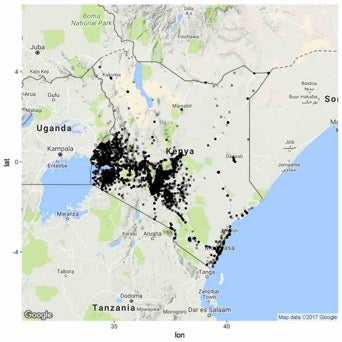 Secondly, M-PESA is cheaper and more accessible than other systems for transferring money, but this can reduce the incentive to save. Users know that they can reach out to their support networks more easily, safely, and at lower cost, in case of an unexpected shock, than they could without M-PESA. Conversely, users also know that other members of their network may be more likely to approach them for support assistance. Both of these effects might reduce the incentive to save.

The net effect of mobile money on savings is thus theoretically ambiguous, and depends on which channel is dominant. My paper extends existing work (see Mbiti and Weil, 2011; Demombynes and Thegeya, 2012; Jack and Suri, 2014; Suri and Jack, 2016), which focused only on the net effect. I illustrate the two channels through which M-PESA impacts savings in a model of precautionary savings with costly storage and remittances, and estimate the combined net effect and the opposing effects in rural Kenya in 2013. I instrument for the endogenous mobile money adoption choice with household's distance to the closest mobile money agent.

Data: The data on rural households come from cross-section Financial Access (FinAccess) surveys conducted in Kenya by Financial Access Partnership (FAP) and implemented by Financial Sector Deepening (FSD) Kenya and the Central Bank of Kenya (CBK). The second data source of financial service providers is derived from a survey carried out by the Gates Foundation in partnership with the CBK and FSD Kenya in 2013.

Methods: I consider two different definitions of mobile money use and estimate the impact of having at least one user member in the household in each case. The first takes the households with a member officially registered to M-PESA as user households (registered M-PESA user). The second focuses on the reported usage and takes the households with a member who reported that they had used mobile money recently (in the last 12 months) as user households (active M-PESA user), regardless of the registration status.
I am interested in two things: first the impact of M-PESA use on the propensity to be a saver, estimated in a bivariate probit model; and second, the impact on the self-reported average monthly savings per household member, estimated in a Tobit model with an endogenous regressor. Both models account for the fact that the decision to use M-PESA and to save, as well as the amount of savings, may be linked, and estimate the correlation between these decisions.

Identification - Distance as the instrumental variable: A household's distance to the closest mobile money agent serves as a valid instrument for M-PESA use for two reasons.  First, it satisfies the relevance condition. The propensity to be an M-PESA user for rural Kenyan households is significantly negatively related to their distance to the closest mobile money agent. And second, it is plausibly exogenous to unobserved household characteristics used in the estimation. To support the exogeneity assumption, I use 2006 cross-section for the saving behavior of rural Kenyans in 2006 prior to the inception of M-PESA in 2007. I find no correlation between the saving variables of 2006 households with their future distance to the nearest mobile money agent in 2013. This supports that the distance variable does not affect the savings through another mechanism, but only through adoption of M-PESA. I also consider a placebo test, following Slichter (2014) and Altonji et al. (2005), which makes use of covariates and the fact that once the relevance of the instrument disappears, there should no longer be a relationship between the instrument and the outcome variable. The data shows that amongst early adopters of M-PESA, for banked households in the top two wealth quintile in the sample, distance is not relevant to M-PESA use and it also has no connection to the saving variables. 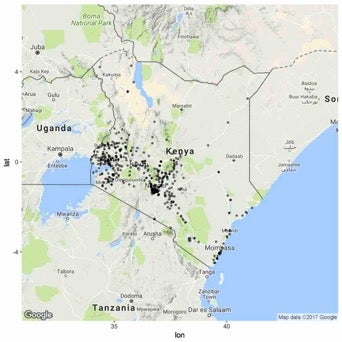 To conclude, adoption of mobile money can affect users’ incentives to save in multiple ways.  On balance, M-PESA led to an increase in savings amongst mostly poor rural residents in Kenya, although both positive and negative impacts could be observed, consistent with the theory I develop.

Alev Gurbuz is a Ph.D. Candidate in the Department of Economics at Georgetown University and is on the job market this year.
Topics
Jobs & Development

Is your instrument (distance to a mobile money agent) actually exogenous? That is, is it really uncorrelated with the model error term?

Thank you for your question. That is a very valid concern and unfortunately there is no way to test it. However, as I mentioned in my blog post, I have two arguments supporting the exclusionary restriction: First, the saving outcome variables of rural Kenyan households in 2006 are not correlated with their hypothetical distance to the agents in 2013. Second, following the framework in Slichter (2014) and Altonji et al. (2005), I consider a subsample of households for whom the distance variable is not relevant to their M-PESA use - banked households in the top two wealth quintile in the sample. The intuition is that once the relevance of the instrument is gone, a valid instrument should have no causal relation to the outcome variable, which is the case here. Thus, distance to the closest M-PESA agent in rural Kenya is plausibly affecting the outcome variables only through its effect on M-PESA use.

I am conducting a similar study