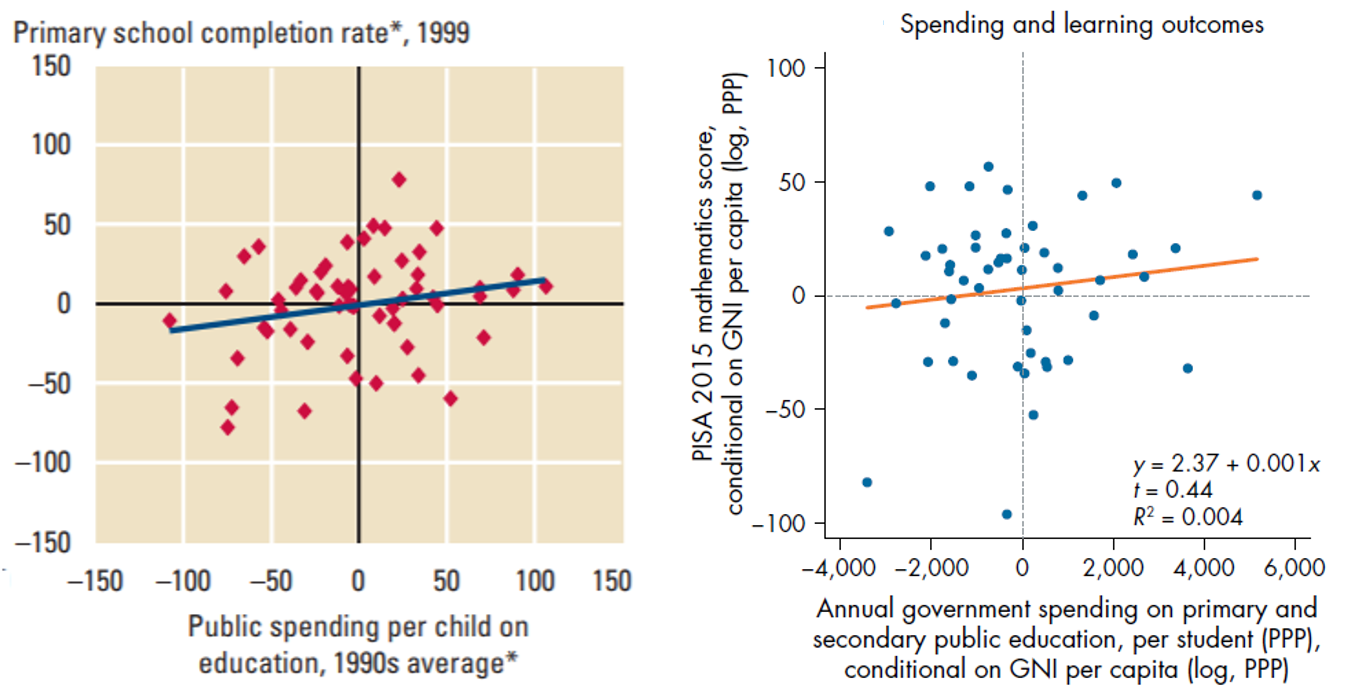 And yet, correlation is not causation (or in this case, a lack of correlation is not necessarily a lack of causation)! Last month, Kirabo Jackson put out a review paper on this topic: Does School Spending Matter? The New Literature on an Old Question. This draws on a new wave of evidence from the United States’ experience, moving beyond correlations to efforts to measure the causal impact of spending changes. (Jackson and various co-authors have contributed significantly to this literature.) I’ll summarize his findings and then discuss what we might expect to be the same or different in low- or middle-income contexts.


Does money matter? Yes.
In the U.S., many states have undergone reforms in how they finance education. Historically, most primary and secondary education was financed by local property taxes, so richer areas had better funded schools. But between 1971 and 2010, more than two dozen states had to reduce inequality in spending due to judicial decisions. This led to changes in school spending that were not related to other variables – like local commitment to education – that normally make it hard to parse out the link between financing and education. Using the variation in spending coming from the first wave of reforms, “a 10% increase in per pupil spending each year for all 12 years of public school leads to 0.31 more completed years of education, about 7% higher wages, and a 3.2 percentage-point reduction in the annual incidence of adult poverty. They also find that the effects are more pronounced for children from low-income families.”

A study of more recent school finance reforms finds that “a one-time $1,000 increase in per-pupil annual spending sustained for 10 years increased test scores by between 0.12 and 0.24 standard deviations.” Another study finds that in states with strong teacher unions, school districts tended to match increases in state funding, which “led to larger increases in student achievement.” Other work looks at the impact of these financing reforms on high school graduation rates: “Seven years after reform, the highest poverty quartile in a treated state experienced an 11.5 percent to 12.1 percent increase in per-pupil spending, and a 6.8 to 11.5 percentage point increase in graduation rates.”

Beyond school finance reforms, the Great Recession (2007 to 2009 in the United States) provides an additional natural experiment. State tax revenues fell much more suddenly than local or national revenues, so states that relied more on state revenues had a disproportionate drop in financing. Researchers found that “a 10 percent school spending cut reduced test scores by about 7.8 percent of a standard deviation.” Another study finds comparable results: “a 10 percent increase in spending improves…student test scores by 0.05 to 0.09 standard deviations.”

In sum, out of 13 multi-state studies, Jackson finds that 12 show a positive, statistically significant relationship between education spending and student outcomes. And remember: these aren’t just correlations. These are all studies that have tried to tease out the actual impact of spending on learning or attainment.

Does how you spend the money matter? Yes.
Jackson then reviews studies on how much different types of spending matter. He finds that unrestricted spending increases led to better student outcomes (8 out of 9 studies show positive results), textbook spending improves outcomes in primary school (just one study), a mixed bag on construction spending (4 out of 7 studies show positive results), and that spending targeted to low-income schools in New York City had unclear (but likely null) effects.

Jackson’s takeaway? “On average, money matters,” but “this is not always so in all settings or in all contexts.” There is much more detail in the review; I recommend reading it in full. There are also lots of ideas for different approaches to making causal estimates, at least some of which could translate to middle- or low-income contexts.

How might these results translate to low- and middle-income environments?
The fact that a range of studies in a high-income country have shown positive impacts might lead us to expect even bigger impacts in countries where fewer resources are currently spent on students. The marginal value of an additional dollar (or shilling or peso) may be higher when students have very few resources to begin with. On the other hand, if resources intended for education are less likely to reach the schools in countries with weaker institutions, then there could be a smaller impact. In a study in Uganda from the 1990s (thus not necessarily representative of current institutions), “less than 30 percent of funding intended for non-salary public spending actually reached the schools in 1991-95.”

Money matters, and it’s impossible to imagine increasing the primary school completion rate in low-income countries from its current 67 percent to every child finishing elementary school without increasing spending, just in terms of construction and teachers for all these additional students. (And that’s without even thinking about middle-income countries or secondary school!) But how we spend the money also matters: Not every form of spending is equally effective in the United States, and the same will be true in lower income environments.

So increase school spending, track its use, measure its impact, and adjust.