This is the twelfth in this years' job market series.
Family firms are the most prevalent type of firm in the world. This is especially true in emerging economies, where family firms account for over half of medium-sized firms in the manufacturing sector. In particular, dynastic family firms – that is, where the founding family owns a controlling share and have appointed a second-generation (or later) family member as the CEO – account for a quarter of these firms. Since supporting such firms as the “backbone of the economy” is very politically popular (as this skilfully edited video from Last Week Tonight with John Oliver shows), it is crucial to understand more about these firms. More specifically, we need to understand how they operate and what their impact is on the economy and labour markets. Although there is mixed evidence on whether family ownership is a good thing, the weight of the evidence is that dynastic family CEOs are usually bad news for productivity. But why is that the case?

Poor management practices have been widely shown to causally affect productivity, and in my job market paper – co-authored with Renata Lemos– we show the first causal evidence that dynastic family firms have worse management practices: about -0.8 standard deviations (SD). Combined with production function estimates of the correlation between management and productivity, this effect implies a possible productivity hit of 5 to 10%. We then consider the reasons behind this managerial underperformance, and build a simple stylized model to explore how reputation costs, which seem to push the first-generation CEOs to do better, might act as a constraint on management innovation for second-generation CEOs.

Dynastic family-owned firms have worse management practices, but only if run by family CEOs

Despite the global prevalence of family firms, research on this topic is often stymied by lack of good data on private firms. One large project that has worked to remedy some of this gap is the World Management Survey (WMS). The WMS uses a survey tool covering 18 management topics scored on a scale of 1 to 5 (worst to best). Having worked on this project for nearly a decade, we noticed one stubborn pattern across countries: family firms consistently placed in the bottom of the management quality rankings.

Figure 1 shows the cumulative distribution of management scores for firms run by dynastic family CEOs, firms run by a professional CEO but owned by families, and all other non-family firms. What is immediately obvious is that, much as the literature suggests, family ownership does not seem to be an issue per se, but rather the difference seems to be driven by the choice of CEO. However, one can think of a number of other stories that would also fit this stylized fact: for example, if the firms that stay as dynastic family firms are so bad that only family members would take them on, the underperformance in management is due to a selection effect rather than the CEO’s identity. But how to address the endogeneity issues inherent in successions decisions? 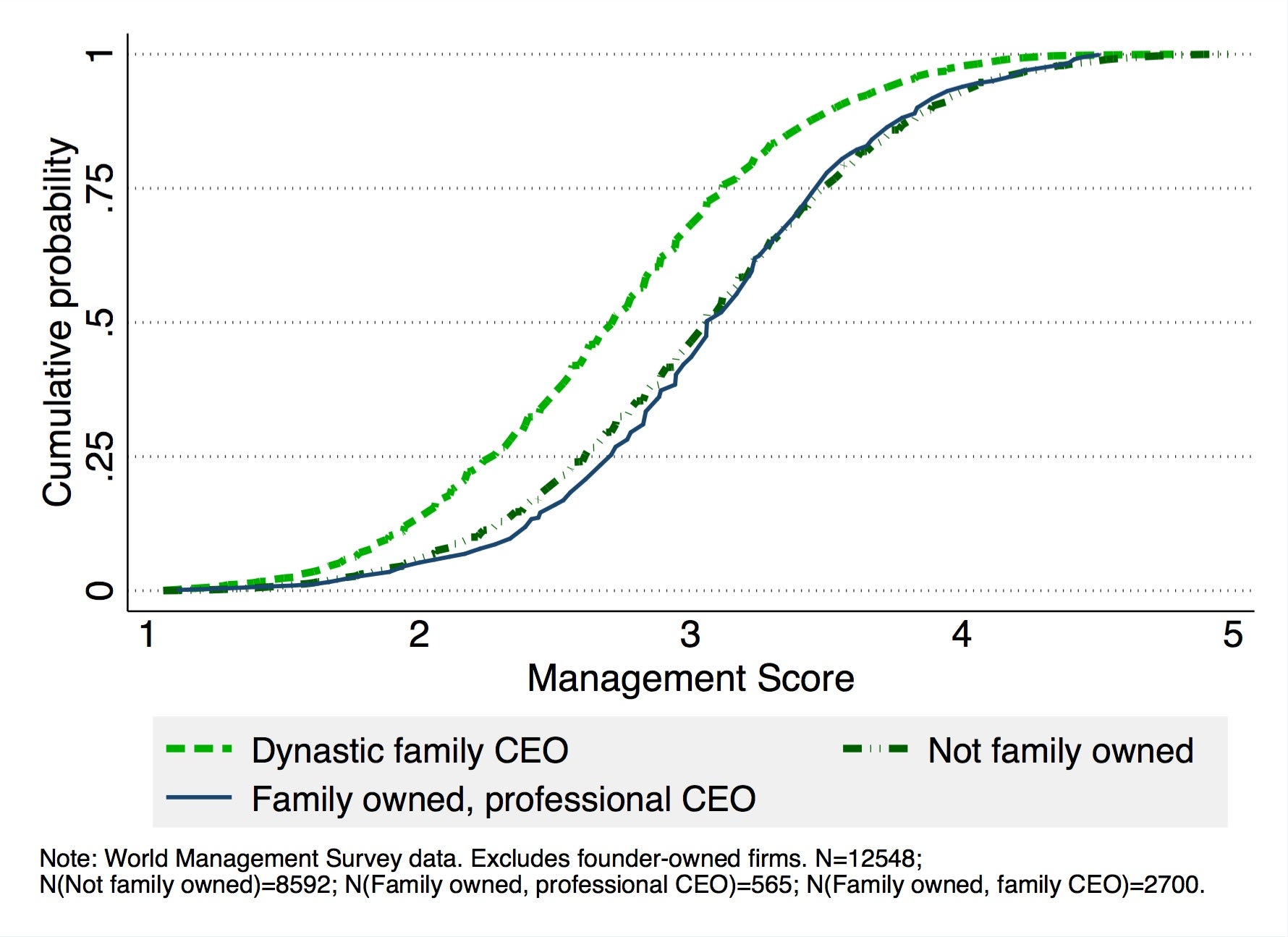 Previous research has either focused on public firms (here) or exploited the dreamily-rich datasets of Denmark (here). In our best attempt at mimicking such administrative datasets in countries where they do not exist, we developed a new survey to collect data on the history of succession of ownership and control, as well family characteristics of family CEOs. We used the WMS sample of firms and interviewed over 2700 firms in 2014, though a large share of these firms were still first-generation founder firms or had not been founded by a single family or founder. At the end, a total of 810 firms from 12 countries had undergone at least one succession originating from a founder or family firm at the time we interviewed them. To identify the causal relationship between dynastic CEO successions and management quality, we follow an instrumental variables approach. Given the total number of the outgoing CEO’s children, how many of them happen to be boys is as good as random. This gives us a neat instrument for dynastic CEO successions: we find that outgoing CEOs who have at least one son are about 30 percentage points more likely to keep the firm in the family than those who had no boys.

Figure 2 depicts this pattern: for each category representing the number of sons of the outgoing CEO, each block indicates the identity of the new CEO. Assuming that the gender of the outgoing CEO’s children is unrelated to their choices of management practices, we estimate that a succession to a family CEO leads to 0.8 standard deviations worse management practices relative to firms with successions to non-family CEOs. But why might that be? 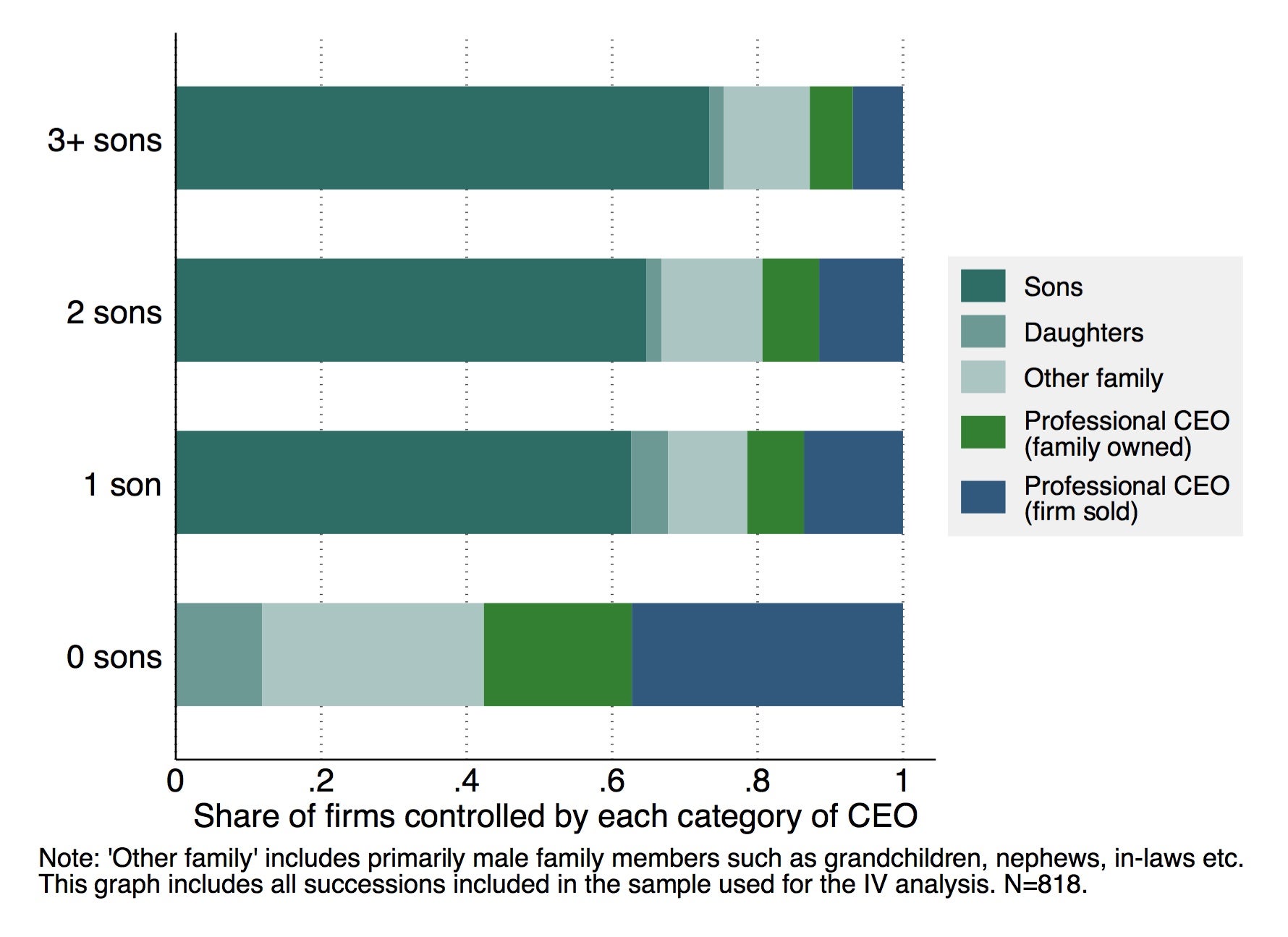 The second part of our analysis focuses on understanding why firms led by family CEOs adopt fewer structured management practices. There are a number of reasons underlying the difficulties in effecting organizational change, and the two mechanisms often ascribed to family firms relate to lower levels of skill (here, here and here) and lack of awareness of managerial underperformance (here, here and here). Neither of these mechanisms, however, fully explain the gap in management underperformance.

We propose a different possibility based on the wealth of evidence that suggests family firms have implicit employment commitments with their workers. Evidence of such commitments includes providing better job security as a compensating differential for lower wages and firing fewer employees when hit by negative productivity shocks. We build a simple theoretical framework and propose that, because of these implicit commitments, family CEOs incur a “reputation cost” of firing workers. If we think of management as a monitoring technology that allows CEOs to observe their workers’ productivity, it is only profitable to invest in the technology if the CEOs then use the information to discipline the low productivity workers. Thus, the “reputation cost” incurred by family CEOs may act as a constraint on investing in this technology. We find empirical support for the predictions of the model.

Although a naive solution could be that all family firms hire professional CEOs, that would be an unrealistic prescription. There are binding institutional constraints that bar many firm owners in emerging economies from pursuing this avenue — for example, if there are thin markets for managerial talent or weak legal systems that might fail to protect owners from devious CEOs — and also owner-managers preferences for being their own boss. If we accept family control is the necessary (or preferred) control structure for many firms, it is crucial to understand what may be the barriers to investment in better management practices within family firms.

We push the literature forward in two main ways: first, we show the first causal evidence that dynastic family CEO successions lead to worse management. Second, we go beyond the usual suggestions of improving information and skills, and suggest that the specific labour context that family firms act in is important. We propose that the implicit employment commitments between family managers and their workers should factor into both how management upgrading projects are presented to prospective firm managers as well as into the expected take-up and long-term adherence of such improvements. This is a key consideration as many organizations push forward in enacting management upgrading projects around the world.

Daniela Scur is a job market candidate from the University of Oxford.