This is the eighth in this year’s series of posts by PhD students on the job market.

Condoms are the only well-established technology that protect against sexually transmitted infections (STIs). Yet in 2015 alone, an estimated 3.3 billion risky sex acts took place without condoms in Sub-Saharan Africa, leading to 910,000 new HIV infections (UNAIDS, 2016a). Women disproportionally bear the costs associated with risky sex: they are more vulnerable to HIV infection, and carry the burden of unwanted pregnancy (UNAIDS, 2016b). Yet despite women standing to benefit most from condom use, the decision to use a condom is joint, and both sexual partners must agree. Thus women with low bargaining power may struggle to convince their male partners to use condoms.

In my job market paper, co-authored with Rachel Cassidy (IFS) and Marije Groot-Bruinderink and Wendy Janssens (AIGHD), we show that low female bargaining power appears to be a significant driver of low use of male condoms, and that female condoms can offer a partial solution.  Using an RCT in Mozambique, we find that women with low bargaining power and those who are having unprotected sex are able to convince their partners to use female condoms, which men find more pleasurable and less stigmatizing than male condoms. This implies that despite the higher unit cost of female condoms, providing them for free may be a cost-effective policy.

Female condoms as a second-best solution?
Female condoms are slightly less effective in preventing STIs and more expensive to produce than male condoms (Dowdy et al., 2006; Trussell et al., 2011), but are more pleasurable and less stigmatizing, especially to men (Wanyenze et al. 2011; Koster et al. 2015). From a policy perspective, their introduction is justified if it helps women having unprotected sex convince their partners to use this second-best alternative. On the other hand, introducing female condoms could backfire if couples substitute male condoms for female condoms, increasing the overall riskiness of sex. 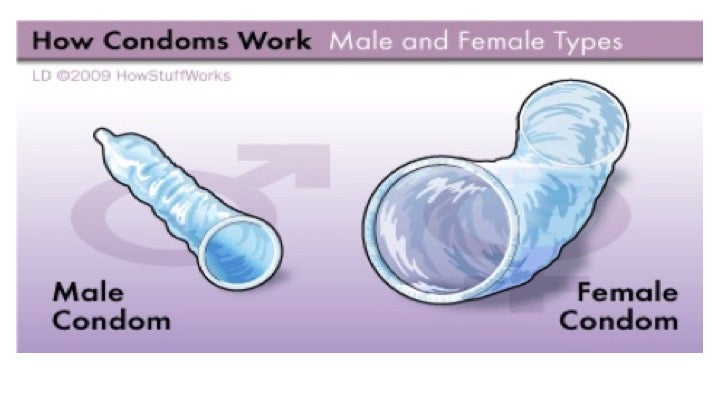 An RCT focusing on women’s bargaining constraints
We conduct a field experiment in the slums of Maputo, where the female HIV prevalence rate is estimated at 30%, to examine how household bargaining affects use of protection. Specifically, we exploit the scale-up of a condom program implemented by Pathfinder, which seeks to increase condom use by offering female condoms alongside male condoms. Participating women, out of which 85% are in a stable relationship, attend a series of group sessions that provide information about contraceptives, comparable to standard sex education programs in health centers and schools in locations with high HIV prevalence. Female condoms are added to the set of products carried by local health workers (which already includes male condoms) that participants can access freely and discreetly at the end of each session. The intervention thus alleviates information, access, and price constraints for both male and female condoms, allowing us to study how bargaining affects condom use. We use a phased-in randomized control trial (RCT) to compare women who attended the condom training to women who were randomized to wait an additional six months before beginning the course.

A model of intra-household bargaining and technology adoption
To help us think about who might adopt each type of condom and why, and indeed whether the frequency of sex might increase when condoms are offered, we introduce a model of the household where partners jointly choose whether and how they have sex. The model predicts three effects when female condoms are introduced. First, on the intensive margin, some women with low bargaining power who were previously having unprotected sex are now able to convince their partners to adopt female condoms (but not male condoms), increasing condom coverage. Second, some women with intermediate bargaining power who were previously using male condoms also substitute into using female condoms, decreasing average condom effectiveness. Third, on the extensive margin, some couples who were not previously having sex, because neither the utility from unprotected sex nor the utility from sex protected by condoms was greater than both partners' outside options, now have sex with female condoms. The relative magnitudes of each of these margins of response are important to determine empirically, in order to establish total effects on HIV transmission and welfare.

High-frequency data on sexual behavior
In addition to baseline and endline data, we also collect weekly sexual diary data. This allows us to not only understand condom adoption, but also to understand the bargaining process and study impacts at the level of sex acts. The diaries are also instrumental in mitigating recall bias and misreporting, which we further address by recording the number of condoms that participants take with them after each session. To measure household bargaining power of the women who are in a stable relationship, we collect information about assets brought by the woman to the relationship, and also enumerate two different survey modules covering decision-making and power dynamics in the relationship (Donald et al., 2017).

Women with low bargaining power adopt female condoms most strongly
As predicted by the model, among women in a stable relationship, adoption of female condoms is driven by women with lower baseline bargaining power; see Figure 2. Moreover, women who were having unprotected sex at baseline show particularly strong female condom adoption and drive the higher probability of having sex in the treatment group. Adoption is also greatest among women who are not in a stable relationship at baseline and women who are HIV-positive, suggesting increased coverage of the sex acts with the highest risk of HIV transmission. 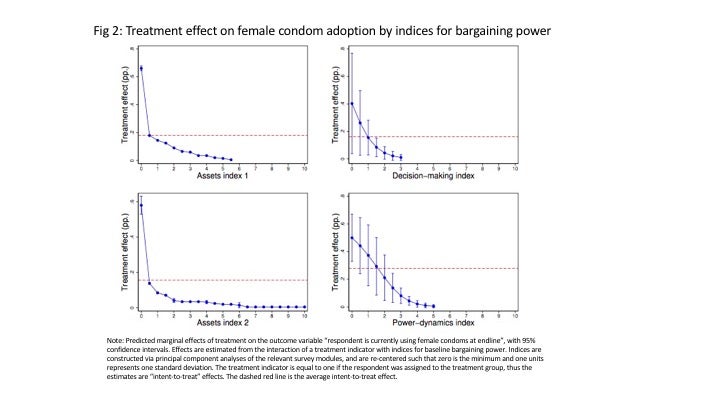 Overall, the paper demonstrates how policy design should take into account asymmetry in the costs and benefits of technology adoption across household members. In particular, we highlight how low female bargaining power may lead to under-adoption of technologies that improve household welfare, in cases where women have a stronger preference for adoption or face higher costs of non-adoption. In such cases, the first-best policy may be to target male preferences, through information and social norm campaigns to increase welfare-improving investments and adoption (see for example Stopnitzky (2017)). If such campaigns cannot resolve under-adoption, this paper suggests that providing versions of the technology that are more acceptable to men, or bundling technologies with goods for which men have a high demand, may offer a second-best solution. The trade-off between changing norms and adapting technologies to fit with preferences of the dominant partner, both in the short and long term, remain important topics for future research.

Karlijn Morsink is a postdoctoral research fellow at the University of Oxford. More details about her research can be found on her personal website.