FinTech Adoption and its Spillovers. Guest post by Sean Higgins

During my last trip to Mexico, I bought tamales from a street vendor and paid by card—something that would have been impossible not long ago. The vendor, who had a Bluetooth card reader connected to his cell phone, told me that his potential customers are not always carrying cash, and as a result, accepting card payments has increased his sales. This anecdote illustrates a broader trend: as the adoption of financial technologies (FinTech) increases on both the supply and demand sides of the market (see Figure 1), both consumers and small retail firms benefit. Consumers benefit through lower transaction costs—such as the costs of traveling to a bank branch or ATM to withdraw cash (Bachas, Gertler, Higgins, and Seira, 2018)—and reduced risk of crime (Economides and Jeziorski, 2017). Retailers benefit by attracting customers who prefer these payment technologies and may not carry cash.

My job market paper studies how retailers respond to consumers’ adoption of a particular financial technology—debit cards—and how this supply-side response feeds back to the demand side, affecting other consumers’ FinTech adoption and consumption decisions.  I exploit a natural experiment that created a shock to FinTech adoption on one side of the market: between 2009 and 2012, the Mexican government disbursed about one million debit cards to existing beneficiaries of its conditional cash transfer program, Prospera (formerly Progresa/Oportunidades). 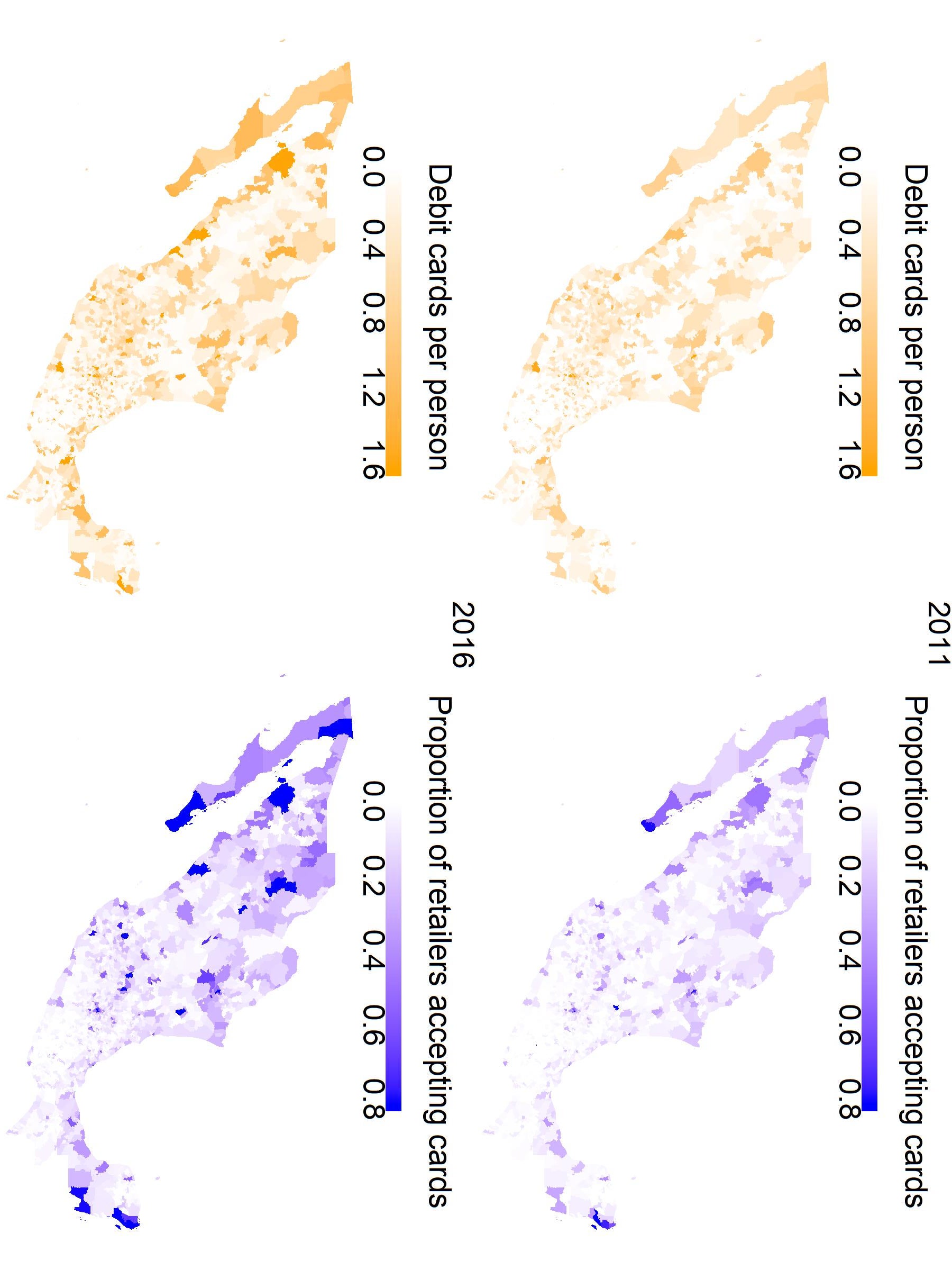 Figure 1. Adoption of debit cards and point-of-sale (POS) terminals over space and time

The policy shock I exploit has two notable features that make it ideal for studying supply-side responses to consumers’ financial technology adoption, as well as spillovers on other consumers. First, the shock was large: in the median locality, it increased the proportion of households with a debit card from 36% to 54%. Because retailers likely only benefit from FinTech adoption once the fraction of consumers who have adopted surpasses a certain threshold, small-scale randomized control trials (RCTs) on financial technologies with network effects may not provide a large enough shock to study spillovers between the supply and demand sides of the market. Second, unlike some policy changes that affect the cost of adoption for all participants on one side of the market, this shock reduced the cost of debit card adoption only for a subset of consumers (beneficiaries of Mexico’s cash transfer program), which allows me to isolate spillover effects on other consumers.

I combine administrative data from Prospera on the debit card rollout with a rich collection of microdata consisting of seven additional data sets on both consumers and retailers. The key data set on supply-side FinTech adoption is a confidential data set on all POS terminal adoptions by retailers over a twelve-year period, accessed on-site at Mexico’s Central Bank. I combine this with transactions-level data on the use of POS terminals from another confidential data set, which includes all debit and credit card transactions at POS terminals in Mexico (over six billion transactions).

To measure spillovers on other consumers, the two key data sets that I use are quarterly data on the number of debit cards by bank in each municipality from Mexico’s National Banking and Securities Commission and consumption data from a nationally representative household survey. Importantly, the consumption data takes the form of a consumption diary that includes the type of store at which each good is purchased. I complement these with three additional confidential data sets: transactions-level data from the bank accounts of Prospera beneficiaries, a panel on store-level sales, costs, and profits for all urban retailers, and high-frequency price data at the store by barcode level from a sample of stores.

Result 1) Retailers adopt POS terminals in response to consumer debit card adoption
Firms respond to the policy-induced shock to consumers’ adoption of financial technology by adopting POS terminals to accept debit and credit card payments. I find that the number of corner stores with POS terminals increases by 3% during the two-month period in which the shock occurs. Adoption continues to increase over time: two years after the shock, 18% more corner stores use POS terminals in treated localities (relative to localities that have yet to be treated). There is no effect among supermarkets, which already had high levels of POS adoption.

Result 2) Other consumers adopt cards
The shock to consumer card adoption and subsequent adoption of POS terminals by small retailers has spillover effects on other consumers' card adoption. Using data on the total number of debit cards issued by banks other than the government bank that administered cards to cash transfer recipients, I find that other consumers respond to the increase in FinTech adoption by increasing their adoption of cards. Two years after the shock, 28% more consumers (excluding Prospera beneficiaries) have adopted cards (see Figure 2). In the paper, I rule out that this spillover is due to either Prospera beneficiaries and their household members adopting cards at other banks, or that the spillover happens purely through word-of-mouth learning, rather than because more corner stores now accept card payments. 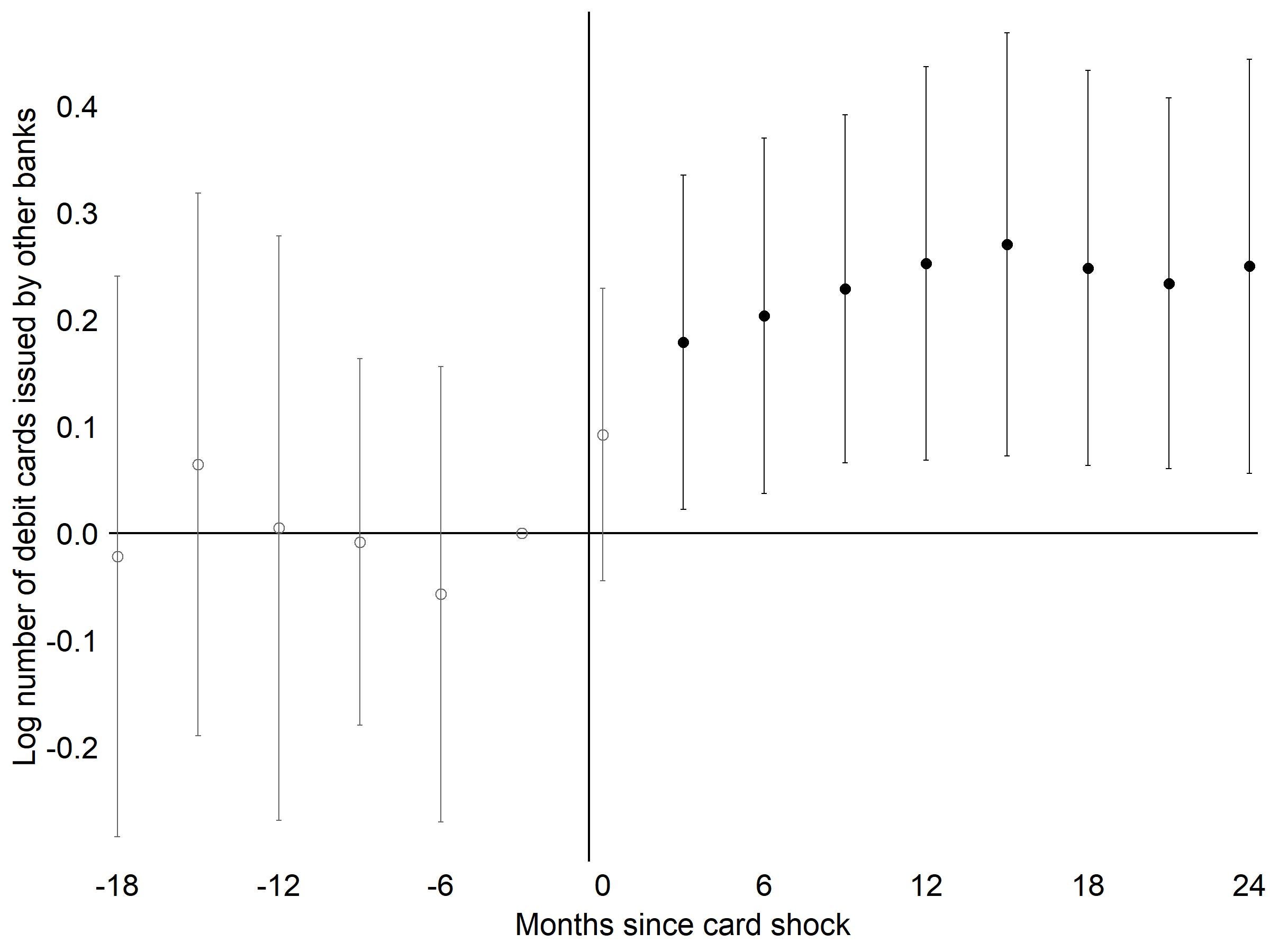 Result 4) Corner stores sell more, and profits increase
Over the five-year period between Economic Census survey waves, corner store profits increase by about 15% more in localities that experience the debit card shock. Examining the effect of the shock on different components of profits, corner stores increase the amount of merchandise they buy and sell but do not change their other inputs such as number of employees, wages, rent, or capital.

Policy implications
Governments around the world are increasingly fostering the financial inclusion of their poorest citizens, striving to increase the adoption and use of financial technologies (Demirgüç-Kunt et al., 2018). The benefits that households reap from FinTech such as debit cards or mobile money depend on adoption of the corresponding technology on the other side of the market. Policies that create large shocks to adoption on one side of the market—for example, by paying government welfare payments into bank accounts tied to debit cards or into mobile money accounts—can spur dynamic FinTech adoption on both sides of the market, benefiting both consumers and entrepreneurs.