Co-authored with Jamie Daubenspeck, a PhD student at Northwestern University

One of the arguments in favor of more gender diversity in the economics profession is that men and women bring distinct perspectives to research and are interested in answering different research questions. We focus in on development economics in this post and examine how the research topics studied by men and women differ.

What we’re presenting here is a descriptive exercise. We will largely refrain from conjecturing on causes or implications. We embarked on this exercise mostly out of curiosity. We were also sparked by a few tweets and a blog post by Rachel Glennerster, in which she hinted that some critiques of randomized experiments seem gender-biased: Topics like health are portrayed as “small,” with critics wanting to see more work on “macho” topics like infrastructure. That got us wondering whether Rachel was right that women tend to study health while men study infrastructure, and more generally, how segregated women and men are in their research areas (across all empirical methods, not just randomized experiments).

We chose three journals -- American Economic Review, Quarterly Journal of Economics, and Journal of Development Economics – and classified the gender of the authors for all empirical development papers published between 2007 and 2017. (We collected the article information from econpapers.repec.org.) An article was considered empirical development if (a) it described an empirical exercise in the abstract, and (b) it was about a developing country.

We identified the gender of each author by checking the first name against a database of first names compiled by Mark Kantrowitz at the CMU Artificial Intelligence Repository. If a name was ambiguous, we manually verified the author's gender using faculty pages, personal websites, and other information such as LinkedIn profiles.

Altogether, there were 1033 empirical development articles written between 2007 and 2017 in these three journals. 51% were written by all men, and 15% by all women. The average female share of authors was 28% (weighting each paper equally).

We used the papers’ titles and abstracts to slot them into one of 16 topics, e.g., health, infrastructure, corruption.[1] The largest topic by far, with 124 publications, is Macro/Finance, which consists of both macroeconomics and international finance and excludes microfinance. This also happens to be the topic with the most articles written exclusively by men, at over 79%.

Figure 1 shows the percentage of women authors for each topic. Gender Equality, Health/Demography, and International Trade have the largest representation of women. Comparatively few women publish on Microfinance, Agriculture, or Industrial Organization. So Rachel’s conjecture was spot-on about health, and infrastructure indeed has below-average representation of women, but not by too much. 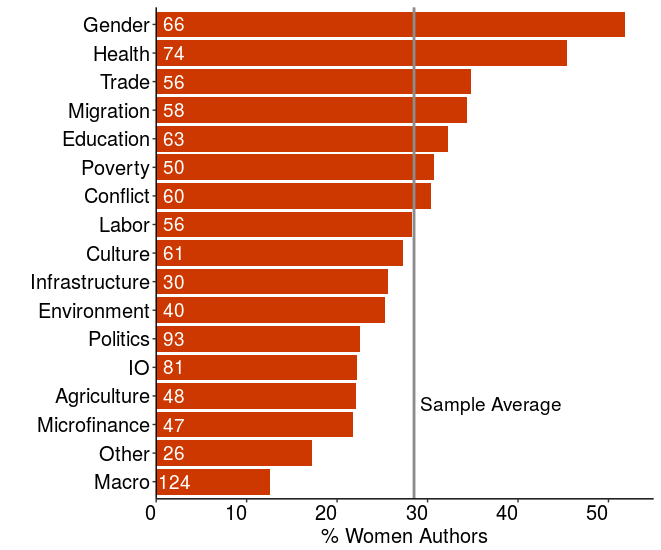 (Note to Figure 1: The number of publications in each category is written in white.)

Turning to the more pointed part of Rachel’s conjecture – that female-heavy topics like health are written off in some quarters as small -- we don’t have data on which topics people view as big and important. But we investigated this idea a bit by using survey data on under-researched areas that David McKenzie collected for a 2011 Development Impact blog post. He asked a sample of 31 male and 26 female development assistant professors what topics they wanted to see more work on.[2] David’s list does not map one-to-one to our 16 topics above, so we also classified papers using his scheme, focusing on the Journal of Development Economics. (His set of topics was not intended to be exhaustive, and he used narrower topics, e.g., HIV/AIDS instead of health.)

A first interesting fact is that opinions about whether a topic is under-researched are not significantly correlated with the actual number of articles on the topic published in the JDE over our sample period.  Another finding is that there is broad agreement between men and women on what they think is under-researched: the correlation between men’s and women’s responses is .64 and significant at the 1% level. But there are some notable outliers. For example, women are much more likely to say that Functioning of Markets is under-researched, whereas men are more likely to view Management and Small and Medium Enterprises as in need of more attention.

Figure 2 shows the relationship between the percent of assistant professors who think a topic is under-researched and the percent of female authors on that topic. The relationship is distinctly negative. This negative association between women working on a topic and its perceived importance is seen among both female and male respondents to David’s survey. 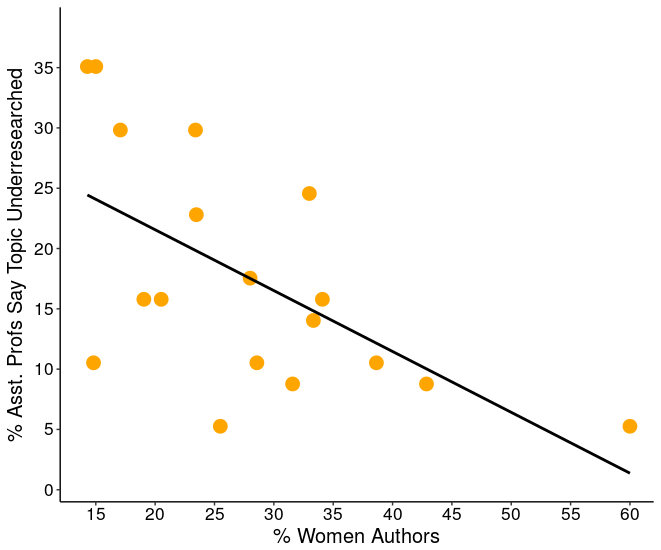 It’s a bit depressing to us that there is less interest in seeing new articles on the topics that women are more likely to be studying. One could give any number of causal interpretations to this correlation. Maybe male researchers are less risk averse and pursue newer, under-researched areas. Maybe, as The Economist speculated last year, “the greater representation of women in these areas lowers their prestige.” Our simple data exercise is not up to the task of testing for any causal relationship. Even the correlation should be viewed with caution: It’s based on the opinions of a small sample of development economists, the topics asked about are not exhaustive, people are giving their views on broad topics rather than specific papers, etc. Nonetheless, we hope this post offers readers some food for thought and inspires others to do further analysis to investigate these issues.
[1]         We came up with a set of topics ex ante and tweaked it a bit once we saw the composition of papers.  We assigned each paper to only one topic; in cases of overlap, for example Macro/Finance and Labor Markets, we classified the article according to our opinion of its core subject.
[2]              The exact question was, “Which of the following do you consider under-researched topics in development? (check all that apply). Note, the idea is to take a 'pulse' or what people would be interested in seeing new research in or what they think the profession neglects, although I have struggled to find a good way to ask this.”  In order from least to most under-researched as rated by respondents, the survey topics were:  microfinance, HIV/AIDS, poverty, household bargaining, fiscal policy, behavioral economics, health, educational attainment, monetary policy, risk and insurance, political economy, rural production, management, industrial policy, migration, regulation, corruption and governance, functioning of markets, and small and medium enterprises.
Topics
Gender Your post is really informative and clear, I fully agree with the reasoning and the methodology. About figure 2 I'm wondering whether the correlation may be interpreted by saying that topics that women are more likely to be studying are not considered "under-researched topics" in development, meaning that when there's no gender diversity researchers consider it investigated thoroughly (?)

Yes, partly.
"Topics that women are more likely to be studying are not considered 'under-researched topics' in development" is the correct interpretation of the correlation. On your last sentence, i think it's the flip of what you wrote. I'll rephrase without using "gender diversity" to avoid confusion: When more of the work on a topic is done by women, researchers consider it investigated thoroughly.

In fact, Figure 2 likely underestimates the negative correlation. David collected data from 57 development economists, 46% of whom were women. 46% is likely higher than the actual representation of women in development economics. I wonder how different the figure would look if you down-weighted the opinions of women to match women's representation in the field? That would give you a more representative picture of how the field as a whole values these topics that women are more likely to address.

As the authors note, female and male development economists had a high correlation in what topics they thought were underrepresented. Seema has a couple of more detailed tables in this tweet:https://twitter.com/seema_econ/status/976077823730487297

Great article!! I was just asking myself the same question :)
Thank you!!