Growing or fading? The long-run impacts of educational interventions

Many education investments focus on the first years of primary education or – even before that – early child education. The logic behind this is intuitive: Without a solid foundation, it’s hard for children and youth to gain later skills that use those foundations. If you can’t decipher letters, then it’s going to be tough to learn from a science textbook. Or even a math textbook. But it’s important to remember that for most “investors” (whether governments or parents or the children themselves), the most basic skills aren’t the ultimate goal. The objective is better life outcomes. Most of the justification for these early interventions are that they will translate into better lives once these children grow up. 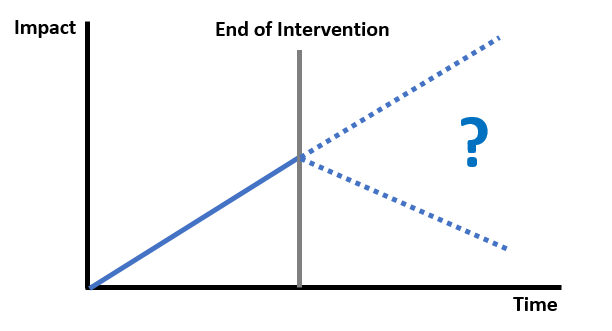 Whether educational interventions actually translate into improved later life outcomes is still largely a mystery. In Patrick McEwan’s review of 111 education interventions, only 1 in 10 had any evaluation taking place more than a month after the intervention had ended. There are notable exceptions: A school-based deworming intervention in Kenya recently showed impacts on school completion and labor market outcomes 10 years after the intervention (Baird and others). An early child stimulation program in Jamaica translated into higher earnings 20 years later (Gertler and others). The famed Perry Preschool program in the United States found sizeable rates of return based on positive outcomes in adulthood (Heckman and others). Smaller kindergarten class sizes in the United States translated to more college attendance (Chetty and others)

These long-term findings of investments in early childhood or in primary school are consistent with what James Heckman has written, that “the higher skill base at [early ages] enhances the productivity of later investment.” But with so few studies evaluating long-term impacts, it can be difficult to be confident that early educational investments will translate into long-term gains. In the same article, Heckman noted that “due to dynamic complementarity, or synergy, early investments must be followed by later investments if maximum value is to be realized.” One can easily imagine that the benefits of early investments could even be undermined by low-quality investments later.

Indeed, there is some evidence for fade-out of learning gains. Evidence from Pakistan suggests that only “one-fifth to one-half of learning persists between grades” (Andrabi and others) so it wouldn’t be surprising that gains from a given intervention wouldn’t persist. Evidence in the United States similarly shows “three-quarters or more [of teacher-induced learning] fading out within one year” (Jacob and others). To further muddy the waters, the same Perry Preschool program that translated to sizeable adult outcomes had impacts on measured intelligence during the program and a year or two after, but not in subsequent measures (Schweinhart and others). So, it is possible that some gains will fade but that later gains may still appear, perhaps operating through socio-emotional skills rather than cognitive ability.

In “School costs, short-run participation, and long-run outcomes: Evidence from Kenya,” we add to this evidence. A non-governmental organization in western Kenya decided to distribute uniforms to children in 12 schools through a child sponsorship program. Since school fees had been eliminated, the cost of school uniforms was the single largest expense that parents reported for sending their children to school. (Unlike some child sponsorship programs, the main individual benefit to children through this program was the uniform.) The NGO distributed uniforms to all orphaned children, and then randomly assigned uniforms among all other children. We used this random assignment to see how providing uniforms affected school participation, both in the short run and the long run.

In the short run, we observed strong gains in student participation in school. Receiving a school uniform increased school attendance by 7 percentage points. If you see school absenteeism as a major problem, this intervention reduces that problem by more than a third. For children who didn’t have a uniform already, absenteeism falls by more than half.

Eight years later, we returned to the schools to see if the children who had received uniforms had completed primary school at higher rates or had achieved higher years of schooling overall. We find no evidence of either benefit. Higher school attendance in early years did not translate into better odds of completing primary school.

Why not? While our data don’t reveal the answer, Heckman’s statement about “dynamic complementarity” may hold a clue. When schools are of low quality overall, increasing attendance may not translate into better longer term educational outcomes. To maximize the odds of persistent gains, education systems will have to complement essential early grade improvements with quality improvements as children move through the education system. A house with a firm foundation but shaky walls is unlikely to withstand the storms that will inevitably come. Thank you for this blog. You make a compelling argument for more post project evaluations as more is invested into trying to improve education outcomes. You might find this of interest http://valuingvoices.com/wp-content/uploads/2013/11/The-case-for-post-p…
It includes one case study from the World Bank, though unclear how (rather illuminating) results were applied.
Best, Laurie

Thank you for this fascinating study. Amazed 1 out of 10 were done in education, normally we find 1 or 2 out of 100! Why don't we return to look at how our expected sustained outcomes worked out 2-10 years later? Why don't we look for what emerged from schools and parents own efforts to sustain impacts? The Bank is a leader, we'd love to know... thanks. More on our SEIEs and a handful of other ex-posts we've researched (as Laurie mentioned) at: www.ValuingVoices.com/catalysts

Hi David Evans, thank you for your reference to the studies conducted in Western Kenya in late 90's and early 2000's (Uniform provision under the schools sponsorship program & primary school deworming project) that have informed research greatly. The school uniforms provision study is a case in point which qualifies the argument that piecemeal interventions in a school system may not yield much for the long run outcomes. To realize long run benefits from a school system requires targeted multifaceted interventions including school feeding, teaching/learning materials, infrastructure improvement, desks/chairs/tables, governance system etc. More research studies needed. Thank you.

I applaud the coverage of such an important topic, but the real factors for determining sustained effects are the dosage and quality of intervention, and this includes fidelity. This needs much better coverage. Continuity and support post program are also well document. It is mistaken in these contexts to only examine experiments. There are all kinds of contamination that occurs plus the ethics of denying for an experiment that would not medically harm. The summary by this blog ignores these issues. Any comparison to US studies are suspect given their own nonrepresentativeness.