Halloween Special: Small firm death, and did I mention zombies?

With tomorrow being Halloween, I thought it perfect timing to discuss a paper about death and zombies. Small firms are an important source of income for the poor in developing countries, and the target of many policy interventions designed to help them grow. But we don’t actually know much about their death, with no systematic evidence available as to the rate of small firm death, which firms are more likely to die, and why they die. Indeed firm death often ends up being hidden in the attrition numbers of much of our data, and out of 35 published RCTs on interventions for small firms in developing countries, only 13 either report a firm death rate or look at death as an outcome.

My new working paper (ungated version) (with Anna Luisa Paffhausen) aims to provide systematic evidence on small firm death in developing countries. We spent several years cleaning and putting together data on more than 14,000 small firms from 16 firm panel surveys in 12 countries, enabling estimation of the rate of firm death over horizons as short as 3 months and as long as 17 years. Detailed questions added to nine of these panel surveys also enable us to dig deeper into cause of death.

What is the death rate of small firms?
Suppose you take a sample of firms that currently exist today (perhaps as the baseline for a planned intervention). How many of these firms should you expect to be alive one year from now, or five years from now?

Each of the 79 points in Figure 1 is a survey-time interval combination: e.g. the death rate over three years for firms in the Mexican Family Life Survey. The intervals are upper and lower bounds that account for attrition. The fitted curve shows the way the death rate varies with time.  The relationship is approximately linear over the first five years, with firms dying at an average of 8.3 percent per year over this interval. 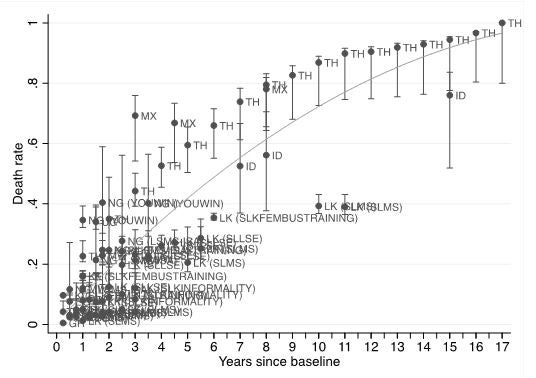 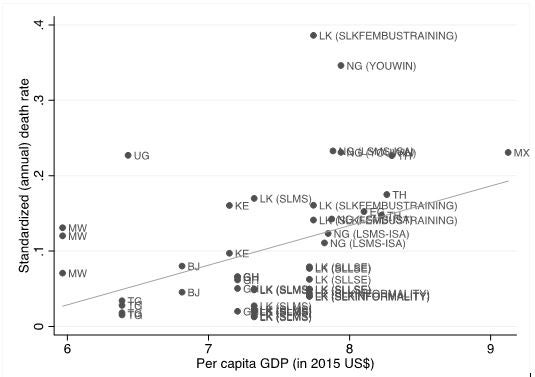 Zombies or Phoenixes?
We define firm death as having occurred if a firm is open at one point in time, and then is reported as having shut down by the owner in a subsequent survey round. By shut down, we mean that the owner of the firm has decided to stop operating the firm, and no one else is operating it. It is not intended to include temporary closures of a few days or weeks that may occur when the owner is ill or away.

Nevertheless, we sometimes observe a firm to have closed down between survey rounds t and t+1, and then the exact same firm to be open again in survey round t. This type of zombie occurrence in which the dead firm reanimates to operate again is relatively rare: 6.2 percent of the firms in our sample are at some point observed to be zombies.
In contrast, it seems more common for a firm to close down, and then for the owner to open a different firm – perhaps a phoenix arising from the ashes of the old firm. Approximately 40 percent of owners of closed firms have opened a different firm within 3 years.

Why do firms die?
We consider three separate theories of firm death. The first views firm death as arising from firm competition and firm-level shocks causing firms to make losses and exit. Here firm death is involuntary, tends to cull less productive firms, and lowers the income of the owner. A second theory predicts firm death as arising from occupational choice decisions of the owner. Firm death can be voluntary here, with owners choosing to shut down when better outside opportunities arise, with less impact on poverty and less selectivity on productivity. A final theory is that firm death results from non-separability of business and household decisions due to imperfect markets. The result is that illness and shocks in the household can cause the business to have to close, resulting in income loss for the owner and not necessarily the least productive firms closing.

Using our cause of death data, we find that the most common reason for firm death is that less profitable and less productive firms end up making losses and closing. However, other small firms, particularly those run by women, close because of illness and family reasons, suggesting non-separability between the household and firm, while a minority of firms, largely run by more educated owners, close because better opportunities arise for the owner.

The title of the blog got me in to read it.....very interesting information David!

David, great post! And great use of data. I am looking forward to reading the full paper. Theories of industrial evolution also suggest that small firms "die" when their innovations are purchased by or merged with other firms. Do your data allow you to see any of this? I expect the innovations would be in manufacturing and services rather than in retail, though. The non-separability between households and firms is not something considered by traditional evolution theory--important finding!

Thanks Annette. Acquisition and takeover seem very rare in these small firms. We see occasional take-over from another family member. Footnote 9 in the paper discusses this a little: "For instance, in the SLMS, only 1.5 percent of owners who stopped operating their business from round to round had sold it, while only 2.9 percent said the firm was being operated by another family member. In the Lomé Informal Enterprise Survey, 1.2 percent of owners who were not running their business anymore had sold it, and 1.8 percent had passed it to a family member. In the Ghana Microenterprises Survey, 7.5% of the businesses that were not being operated anymore by the original owner were being run by another family member, while no business had been sold."

I enjoyed very much Reading the post, but I'm sure you can go deeper on the the reasons for death, my experience shows that usually for SME's, internal problems (specially in collective enterprises) are far more relevant that market issues as reason for closing enterprises(or at least to become zombies)