Several surveys of U.S. employers identify lack of soft skills as the area where young job-seekers have the largest deficiency.  Work by Heckman and others have provided growing evidence that non-cognitive or soft skills are important for a range of life outcomes.  As a result, a growing number of youth programs have incorporated a soft skills training component – examples include the entra 21 program in 18 Latin American countries, the Jordan NOW program, and the Juventud y Empleo program in the Dominican Republic.

But how do we measure what soft skills youth have? One approach has been to rely on a range of survey questions. Examples from a range of different surveys fielded in the US are given here, and include Likert scales for questions like “I can work with someone who has different opinions than mine” and “I keep going with work even when it takes longer than I thought it would”. The World Bank STEP skills measurement exercise employs such an approach in multiple countries, measuring personality traits, grit, and behavior skills.

However, one might be concerned about the subjectivity of some of these reports, and the extent to which people give socially desirable answers. The question then is whether one can have more objective measures of key soft skills.

Hard measurement
In a short paper I am presenting today at the ABCDE conference, Matthew Groh, Tara Vishwanath and I discuss the use of psychometric testing to reduce labor market asymmetries in Jordan. We worked with Dr Marwan Al-Zoubi, a Jordanian psychology professor to design a number of tests for potential job seekers. One set of these tests were for soft skills measurement.
Soft skills were measured by three interactive exercises: 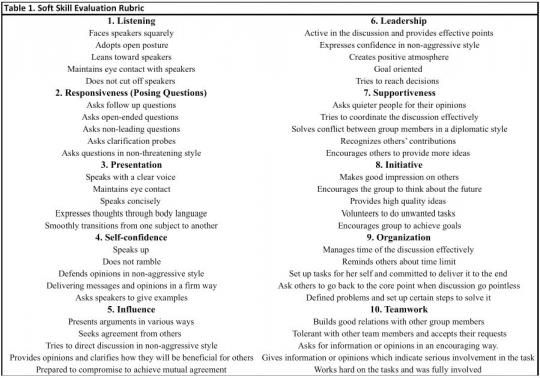 3.  Skills-based interview: where the evaluator asks questions to elicit examples of leadership, teamwork, and overcoming obstacles. This last component was assessed by one evaluator on the soft skill components 6 through 10 in the table above.The group exercise lasted 40 minutes, and the individual exercises lasted 5 to 10 minutes each. We then average the scores in each of the 10 soft skill categories and form a principal component of the average scores in the 10 soft skill categories to create a soft skills index.

We did this for 1567 recent graduates of universities and community colleges in Amman, Jordan. 58 percent of the sample were female, average age was 23, and the most common majors were accounting and business, engineering, and computing and IT.

Does this predict employment?
A follow-up survey that took place on average 10 months after the soft skill assessment suggests that this exercise is capturing something that matters to employers.
Of course we might be concerned that soft skills are correlated with a whole lot of other characteristics that also matter for employment. In the paper we show that they continue to matter for predicting earnings even after conditioning on mental ability, excel ability, English test score, Big-5 personality scores, the student’s score in the national end of high school exams, the university they went to, their major, their previous work history, and their marital status.
So it seems that this measure is picking up something that both seems reasonable in spirit, and seems to have useful predictive power for employment in practice.

When will this be most useful?
Clearly this is a non-trivial measurement exercise, taking a full hour per person, which is as long or longer than many surveys. It requires trained staff to do the assessments, and requires bringing several people together in a group for the group assessment. So it is not an easy substitute for a set of self-reported questions.
It therefore seems most useful for the following contexts:
Anyone else hit upon good ways to measure soft skills objectively? This is an area where the existing literature is rather slight, so there are some interesting openings for new research.
Topics
Jobs & Development
Countries
Jordan

Lipscomb University has a similar soft skills "OSCE" model, based on a set of competiencies licensed from Polaris. I don`t seem to be able to include the URL - contact me if you want it.
Again very resource intensive, intended for "high potentials" in talent management tracks.
They credential these with Open Badges, the Mozilla digital credentialing standard. These are alos making theri way into the international humanitarian sector via disasterready.org
HTH
Don Presant

Hi Don!
My name is Nicholle and I am working at Hands On Nashville through AmeriCorps. I am working on developing an internship program for youth that focuses on workforce development and entrepreneurial skills. My biggest challenge has been figuring out how to measure these "soft skills" and when to do it. I saw this article and wondered if there may be an opportunity for students that are involved in your program to get some practice evaluating these skills and perhaps seeing how they translate to employment in the future.
Could you include the missing URL in your reply?
Thank you very much and I hope to hear from you!
Nicholle

Nicholle
This may be a useful link if Don hasn't already sent one on to you.
http://www.lipscomb.edu/professionalstudies/employer-services
Bruce

David,
I would love to hear more about this. Is it being utilized, are you offerring training in it? Please contact me: MEdwards at CSImail. org

I love this blog post and come back to it often, but a minor peeve is the reference to Tim Kautz as "and others". Tim does not have a Nobel Prize like Jim Heckman, but is an important co-contributor to this work.