Haryana's scarce women tell potential suitors: "No loo, no I do" - Guest Post by Yaniv Stopnitzky

There are "missing women" everywhere. Parents worldwide, and especially in Asia, have strong preferences for sons over daughters, which causes them to selectively abort female fetuses (Arnold et al., 2002; Lin et al., 2008), to invest preferentially in male fetuses (Bharadwaj & Nelson, 2010), and to provide differential post-natal care to boys versus girls (Dasgupta, 1987). In aggregate, these practices create a population sex ratio with too few women relative to men, as compared to other societies without this discrimination against girls.

This situation raises an important question: shouldn't this increasing female scarcity make women more valuable? And could a rising value associated with increasing scarcity perhaps counteract some of the discrimination that caused the scarcity in the first place?

A relatively new strand in the literature examines this issue. In Taiwan, for example, a deluge of young men fleeing mainland China in 1949 caused a massive shortage of women relative to men, which in turn caused an increase in brideprice relative to dowry, an increase in the number of female children, a decline in total number of children, and greater investments in human capital (Francis, 2009). In Bangladesh, one study found that males' expectations about diminished bargaining power in marriage in the future increased the dowry payment paid by brides' families (Arunachalam & Naidu, 2008). And among immigrant populations in the mid-20th-century United States, men raised their education levels in order to better attract spouses when marriage conditions worsened for them (Lafortune, 2011).

"No Toilet, No Bride" in Haryana

My job market paper provides new evidence from India that female bargaining power increases when women are scarce and marriage market conditions favor women. The setting for this paper is rural Haryana, which has, according to the new Indian Census 2011, the most skewed sex ratio of any state. Haryana is geographically and culturally a part of the greater Punjab region, long famous as the subcontinent's epicenter of son preference, low women's status, and sex imbalance.

In this social context of discrimination, females in rural Haryana have in recent years demanded and obtained from men a particularly valuable good---toilets---as a precondition for marriage. This change arose with an unusual sanitation campaign commonly known as "No Toilet, No Bride", which Haryana state authorities initiated in 2005. The campaign encouraged families of marriage-age girls to demand that potential suitors' families construct a latrine prior to marriage. Mass media messaging via billboards, posters, and radio advertisements emphasized phrases such as "no loo, no I do" and "I won't marry my daughter into a household unless they have a toilet". These messages were framed by women's concerns about privacy and dignity when they defecate in the open, a behavior routine among roughly 70% of rural households in Haryana in 2004. 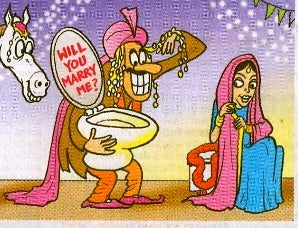 Toilets are a type of female good because of the gender-specific importance of privacy in a male-dominated culture. Women suffer disproportionately from unwanted attention and sexual harassment due to public defecation and urination. Because of this, many women wait until after dark to relieve themselves, at which time they are at greater risk of attack from people and/or animals. Menstruation also drives the desire for privacy and poses a significant barrier to education when toilets are lacking (Sommer, 2010). Given these gender-specific preferences as well as the particular context of the "No Toilet, No Bride" campaign, changes in latrine ownership reflect costly investments that men can make to improve their desirability on the marriage market.

To study women's ability to obtain latrines, I employ an empirical strategy based on the intuition that the "No Toilet, No Bride" campaign exerts disproportionate pressure to adopt a latrine on those households with boys active on the marriage market. If the program was successful in linking sanitation with the marriage market, then households with boys of marriageable age face exogenous pressure to build a latrine, and they should therefore have a higher probability of latrine ownership after exposure to the program. Since the campaign began in 2005, households are unable to choose the number of marriageable boys as a response to program incentives. In this sense, program exposure in Haryana is plausibly exogenous to the presence of a marriageable boy. Still, because such households could differ from households without marriageable age boys in a variety of unobserved ways, my econometric specification controls explicitly for these unobserved characteristics. Using data from two rounds of the District-Level Household and Facility Survey (2004, 2008/9), a nationally representative, household data set, I implement a difference-in-difference-in-difference approach that compares latrine ownership in households with and without boys of marriageable age, in Haryana and comparison states from northern India, before the program started and three/four years after the program began.

I find an increase of 15% in latrine ownership among households with marriage-age boys in Haryana, as compared to Haryana households without marriage-age boys as well as similar households in comparison states in north India. This is over a base level of latrine ownership of 28% in 2004. Most interestingly, I provide strong evidence that latrine adoption is driven by marriage market opportunities structured by skewed sex ratios. In particular, I find that the “No Toilet, No Bride” program effect rises to nearly 25% when a household with marriage-age boys is active in a marriage market with a scarcity of women. In contrast, when women outnumber men in a given marriage market, the program effect is only one-fourth as large. These results suggest the relative bargaining position of Haryana’s women at the time of marriage, as identified through their ability to secure private latrines at home, is increased when women are scarce and men must compete more intensely for the remaining women. 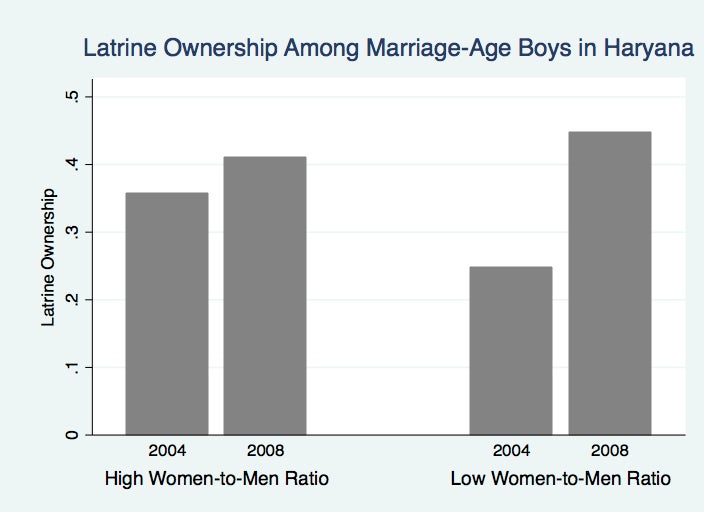 These findings contribute to our still limited understanding about what makes large-scale behavior change programs successful. Shifting deep-seated and profoundly personal behaviors, like those regarding sanitation and hygiene, or protecting oneself against HIV, is very difficult, particularly with such a "light" treatment as that of the "No Toilet, No Bride" campaign. In this case, however, the information campaign cleverly linked itself to an even more deeply held set of social customs around marriage. It did so in a way that converted the desired behavior from being undiscussed (if not taboo, at least in marriage negotiations) into something of a widely discussed status symbol. In this way, the "No Toilet, No Bride" campaign provides an exemplary framework for thinking about how messaging campaigns can tap into local customs and social norms in order to improve development outcomes.

Great piece! Enjoyed reading it very much. I look forward to reading your paper too.

This is right and quite appreciable but the unfortunate part of this situation is that Most Indian families including parts of Haryana (under social and religious bindings in mind) preferred birth of boy child so aborted girls before birth, that resulted disproportionate sex ratio. Thus shortage of brides and demand made Toilet important. As long as girls are murdered before birth, one day will come when bride families demand dowry.

On one side murder of female fetuses and the other side demand of brides!!
You decide, is it a good or bad news?

The skewed gender ratio in haryana may definitely increased the bargaining power of women to some extent but has also led to undesirable consequences like that of polyandry - one woman getting married to all the brothers in the family, prevalent in villages of haryana and neighboring rajasthan. that the woman may bargain her way out of household chores and get one of her husbands to pitch in with the work may depend entirely on the assertiveness of the woman concerned.!!