This is the sixteenth post in our series by students on the job market this year.

Intimate partner violence (IPV) is a serious public health problem which affects hundreds of millions of women globally. Worldwide, one in three women has experienced some form of physical or sexual IPV in their lifetime (WHO 2021). According to the U.S. CDC, IPV is not only associated with physical injuries and mental health problems but also inflicts considerable economic cost in such forms as medical services or lost productivity from paid work.

There have been many policy discussions around how to effectively prevent IPV, and public health professionals recommend that a problem like IPV be targeted in multiple directions at the same time (Ranganathan et al. 2021). This is because IPV is a complex problem explained by a variety of psychological, social, and economic factors. There is no single cause of violence, thus tackling IPV requires an intervention that addresses multiple underlying drivers.

In my job market paper, we study the effectiveness of a holistic approach to reducing IPV in Monrovia, Liberia. We partner with the Liberian Red Cross to run an RCT of a multifaceted female empowerment program targeted at marginalized women.

The baseline prevalence of IPV is very high in Liberia. In the most recent Liberia DHS 2019-2020, 35% of partnered women of age 15-49 reported to have experienced physical or sexual IPV in the past 12 months. This is particularly high even compared to other African countries, a geographic region which has a high prevalence of IPV (about 26% on average from countries where DHS data is available). Our study sample shows even higher level of IPV: at baseline, 51% of women reported at least one incidence of physical or sexual IPV in the past year.

One explanation for such a high rate is that the sampling frame of our study are women who were screened for eligibility by Red Cross, and one criterion was being a survivor of domestic abuse. In February 2019, about 600-700 women in target communities applied for the program, and Red Cross selected about 400 women disadvantaged enough to be eligible for the program (e.g., economically vulnerable, witness of extreme violence, survivor of rape/domestic violence, etc.). After conducting a baseline survey in April 2019, we randomized the sample into 200 treatment and  200 control, and the treatment group was invited to enroll for the program soon after. Among the invited, 154 ended up participating in the program.

The program intervention has two major components. The first is aimed at economic empowerment through vocational skills and business training. The training covers both general business skills (similar to those reviewed by McKenzie and Woodruff 2014) and sector-specific skills (either baking, hairdressing, or tailoring). The training is centered around helping beneficiaries set up and manage a small business.

The second is psychosocial therapy, and includes daily group counseling sessions (~10 people per group) and cognitive behavioral therapy focused on relationships with their spouses and other family/community members. The sessions are conducted by Red Cross’s professional staff and involve spouse and children occasionally throughout the program.

The program is atypically intensive: participants attend meetings 4-5 hours every day during the 12-month period. The total number of hours in the program add up to about 1,200, which is far more than similar programs.

How we measure IPV

To measure IPV, we use the WHO’s Violence Against Women module, which is a standardized questionnaire that has been extensively used and vetted by large-scale, multi-country surveys like the DHS. The module consists of 20 questions, each describing a specific IPV episode (e.g., “Did your man ever slap you or throw something at you that could hurt you in the past 12 months?''). To construct our primary outcomes, responses to each yes/no question are indexed into three categories: (1) emotional IPV, (2) physical IPV, and (3) sexual IPV.

Women who participated in the program much less likely experienced IPV

Endline data was collected in April 2021, which was 12-13 months after the program had ended. We were able to track about 91% of the baseline sample, and attrition is balanced between treatment and control. The compliance to treatment was about 75%, and we report both intention-to-treat (ITT) and treatment-on-treated (TOT) estimates, while TOT estimates are our preferred specification. 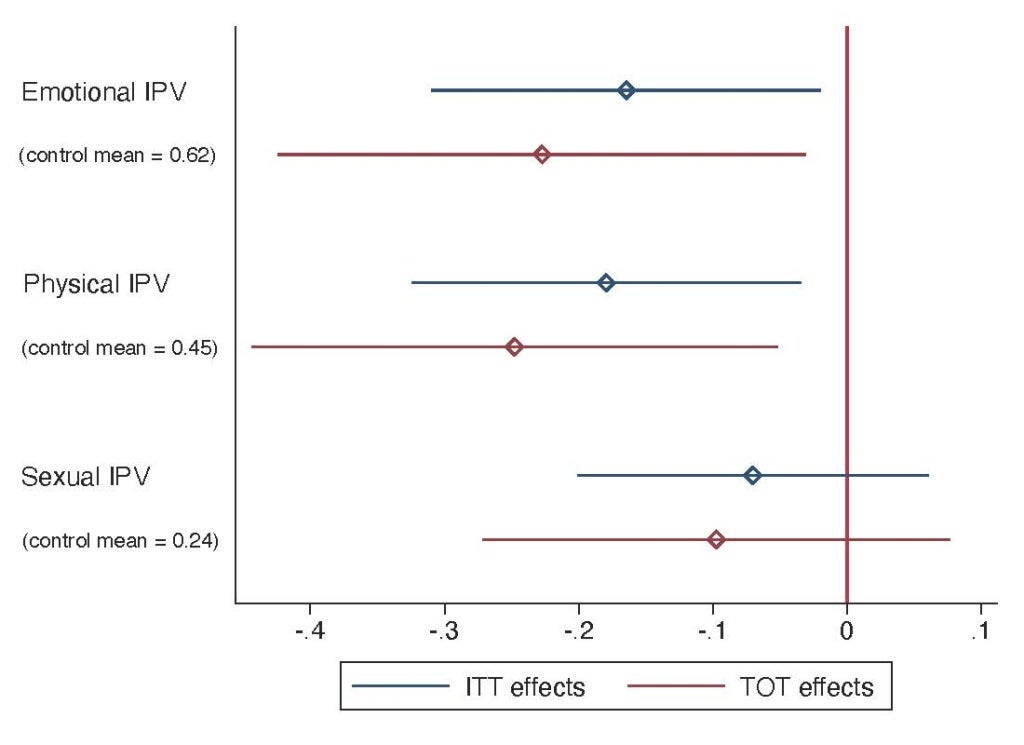 Did the vocational/business training work?

First, we find that the program increases labor supply on self employment by about 22 hours a month from a control base of 38 hours (or 57% increase). We find small and statistically non-significant effect on starting new businesses (i.e., null effect on the extensive margin). This is consistent with the fact that due to financial difficulties, Red Cross hasn’t been able to provide any in-kind business capital (e.g. baking machine, sewing machine, hairdressing supplies), which had been promised to the beneficiaries at the beginning of the program and was supposed to directly help them set up businesses. We don’t find evidence for occupational shifts either. We find modest evidence for crowding out of labor hours devoted to other activities, and the total labor supply hours increases by 19 hours a month (insignificant) from 51 hours in control.

We somehow find no increase in reported income. However, we do find sizeable and significant increase in expenditure, for which our survey module is much more comprehensive and contains a more exhaustive list of items than our income module. Monthly expenditure increases by about US$12 from a control base of $25 (or about 49% increase).

Did the psychotherapy work?

We find positive but statistically insignificant improvements in psychological distress and happiness. Considering psychotherapy is a major component of the program intervention, these results are surprising. However, this is not at odds with previous studies that find dissipated effects of psychotherapy on psychological wellbeing after one year or later (Blattman et al. 2017; Haushofer et al. 2020).

What do we take away?

Our results show that a holistic approach to IPV prevention is effective. This is consistent with the public health professionals emphasizing that the multi-level factors of IPV are important in designing interventions. Yet the large effect sizes we find on IPV, as well as labor supply and expenditure, could be explained by the unusual intensity of the program. The total cost of the program is about $750 per beneficiary; the opportunity cost of the beneficiaries is considerable as well, but no allowances are provided during program participation. While business training programs that are typically much shorter (e.g. 5 days + follow-up visits in Green et al. 2015) show null effects on IPV, there might be a goldilocks solution in between. We leave this to future research. We are also planning to conduct follow-up surveys to measure whether the program effects persist over a longer time horizon.

David Sungho Park is a PhD candidate in Economics at the University of California, Santa Cruz.

This is a very interesting blog. I wonder if the holistic approach included men, for example in the psychological training?