How do household contributions to public goods respond to cash transfers? Guest post by Michael Walker

This is the eighteenth and final entry in this year's job market series. You can read them all here.


A central question in development economics is how to fund public goods. Informal taxation, whereby households make direct contributions to local public goods (such as water resources, roads and schools) outside of the formal tax system, is an important source of funding for public goods in many low-income countries, especially Kenya (Olken and Singhal 2011, Ngau 1987, Barkan and Holmquist 1986). Informal taxes are coordinated and collected by local leaders and enforced via social sanctions rather than the state. In a formal tax system, legal statutes dictate how taxes change with household income. But how does informal taxation respond to changes in household income?

While a large literature finds positive benefits from cash transfers for recipient households (Bastagli et al. 2016, Banerjee et al. 2016,  Evans and Popova 2017), less attention has been paid to how these programs interact with local public finance. If one-time cash transfers to poor households can lead to an increase in public goods investment, this provides a mechanism for long-term and spillover benefits to non-recipients.

The first contribution of my paper is to quantify informal taxation in rural Kenya, where local leaders collect informal taxes via community fundraisers (known as harambees), village meetings, and going door-to-door. Payments are made in cash, labor or in-kind contributions, though most households report paying cash. Households that do not pay are subject to social sanctions such as public announcements, letters, and home visits (Miguel and Gugerty 2005).

The NGO GiveDirectly provides large, one-time unconditional cash transfers to poor households in rural Kenya meeting a basic means-test. Existing research documents large, positive effects for recipients of GiveDirectly’s program (Haushofer and Shapiro 2016). As part of a study on the general equilibrium effects of cash transfers, close to $11 million in transfers was distributed across 653 villages in rural western Kenya (Haushofer, Miguel, Niehaus and Walker (forthcoming)). For this study, households with a grass-thatched roof, an indicator for poverty, were eligible for the program (33% of households). Treatment was randomly assigned at the village level, and all eligible households in treatment village received a cash transfer, while no households in control villages received transfers. (In addition, treatment intensity was randomized at the sublocation level (the administrative unit above a village, containing an average of 10 villages), with 2/3 of villages in high saturation sublocations assigned to treatment and 1/3 of villages in low saturation sublocations assigned to treatment. I control for this in the analysis). Cash transfer treatment households received a series of 3 payments over 8 months totaling almost $1,000 (nominal) via the mobile money system M-Pesa.

Two aspects of the transfer program are especially notable: first, the magnitude of the transfer is sufficiently large to temporarily shift all cash transfer treatment households above the 90th percentile of the baseline income distribution; the median cash transfer treatment household moves to the 97th percentile. Second, local leaders are informed GiveDirectly is working in their village. The fact a) eligibility is based on observable characteristics of the households and b) all eligible households receive a transfer makes it easy for leaders to infer who has received transfers.

Data comes from surveys I specifically designed to measure informal taxation and public goods of over 7,000 households (including households both eligible and ineligible for the cash transfer) and 800 local leaders. The average endline survey occurred 1.5 years after households received their first transfer.

Main Finding 1: No effects on informal taxes or public goods

Given the informal tax results, it is unsurprising that I find no increase in the number of village public goods projects (Figure 1, Panel B), both overall and for water resources, for which informal taxation is especially important. Notably, while the cash transfers do not appear to increase public goods, they do not have a negative effect. 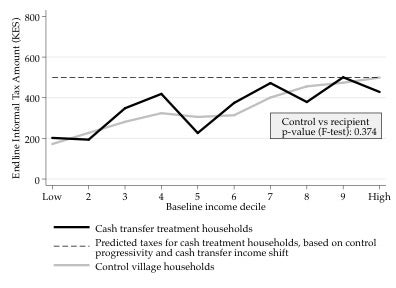 Alternatively, leaders may exempt the cash transfer to allow households to make productive investments now in return for larger payments in the future. However, I find no heterogeneity in effects on informal taxes by the number of months since transfers began, though these are all relatively short-run effects (less than 2 years). I also do not find that leaders extract larger contributions for community fundraisers for social insurance, such as funerals and weddings, nor for bribe payments, from cash transfer treatment households

I do find some evidence of “kinship taxation” (Jakiela and Ozier 2016, Squires 2017), as cash transfer treatment households send about 25 percent more in inter-household transfers compared to eligible households in control villages, predominately to other family members. The magnitude of this increase is still less than 1 percent of the cash transfer value.

My findings suggest that cash transfer treatment households are not overtaxed by local leaders, but I find no increase in public good investment, tempering possible spillover or long-term benefits from one-time cash transfers. Importantly, I do not find negative effects on public good provision, and these findings do not negate the positive benefits to recipient households documented in the literature. To the extent informal taxation is based on permanent rather than temporary income, changes in permanent income are required in order to increase public goods provision via informal taxation.

Michael Walker is a Ph.D. candidate in economics at UC Berkeley.