How to Publish Statistically Insignificant Results in Economics 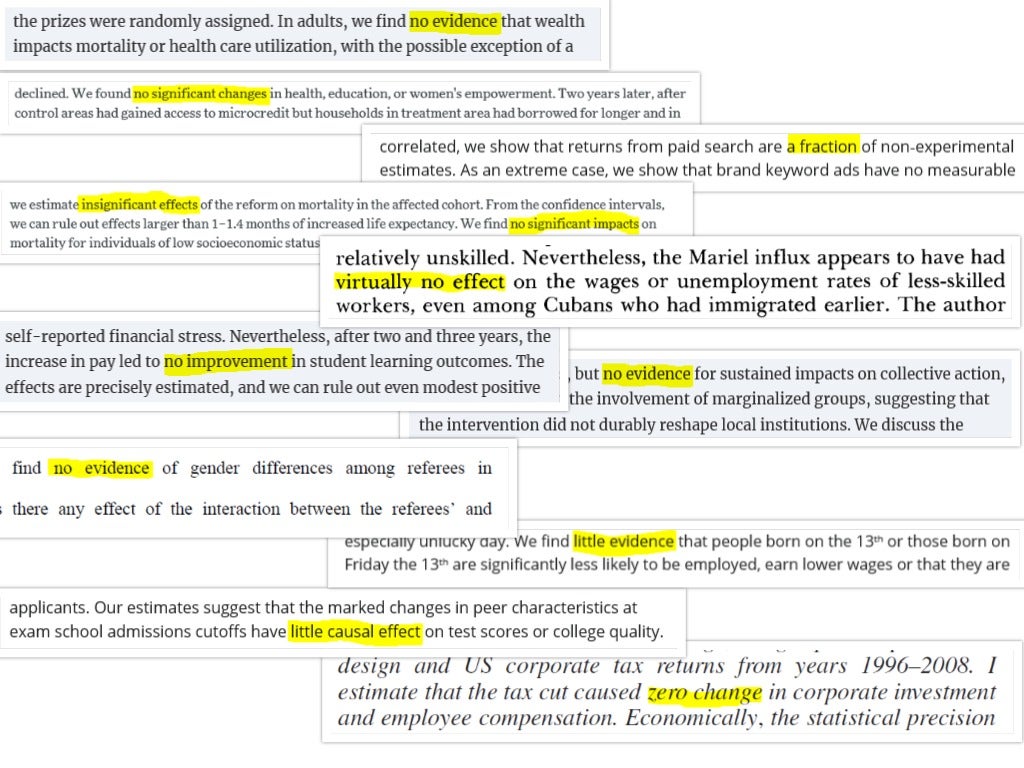 Sometimes, finding nothing at all can unlock the secrets of the universe. Consider this story from astronomy, recounted by Lily Zhao: “In 1823, Heinrich Wilhelm Olbers gazed up and wondered not about the stars, but about the darkness between them, asking why the sky is dark at night. If we assume a universe that is infinite, uniform and unchanging, then our line of sight should land on a star no matter where we look. For instance, imagine you are in a forest that stretches around you with no end. Then, in every direction you turn, you will eventually see a tree. Like trees in a never-ending forest, we should similarly be able to see stars in every direction, lighting up the night sky as bright as if were day. The fact that we don’t indicates that the universe either is not infinite, is not uniform, or is somehow changing.”

In case it’s not obvious from the above, one of Abadie’s key points (in a deeply reductive nutshell) is that results are interesting if they change what we believe (or “update our priors”). With most public policy interventions, there is no reason that the expected impact would be zero. So there is no reason that the only finding that should change our beliefs is a non-zero finding.

Indeed, a quick review of popular papers (crowdsourced from Twitter) with key results that are statistically insignificantly different from zero showed that the vast majority showed an insignificant result in a context where many readers would expect a positive result.
For example…

For example #1, in Atkin et al. (QJE, 2017), few soccer ball producing firms in Pakistan take up a technology that reduces waste. Why?

"We hypothesize that an important reason for the lack of adoption is a misalignment of incentives within firms: the key employees (cutters and printers) are typically paid piece rates, with no incentive to reduce waste, and the new technology slows them down, at least initially. Fearing reductions in their effective wage, employees resist adoption in various ways, including by misinforming owners about the value of the technology."

And then, they implemented a second experiment to test the hypothesis.

"To investigate this hypothesis, we implemented a second experiment among the firms that originally received the technology: we offered one cutter and one printer per firm a lump-sum payment, approximately a month’s earnings, conditional on demonstrating competence in using the technology in the presence of the owner. This incentive payment, small from the point of view of the firm, had a significant positive effect on adoption."

Wow! You thought we had a null result, but by the end of the abstract, we produced a statistically significant result!

For example #2, Michalopoulos and Papaioannou (QJE, 2014) can’t run a follow-up experiment because they’re looking at the partition of African ethnic groups by political boundaries imposed half a century ago. “We show that differences in countrywide institutional structures across the national border do not explain within-ethnicity differences in economic performance.” What? Do institutions not matter? Need we rethink everything we learned from Why Nations Fail? Oh ho, the “average noneffect…masks considerable heterogeneity.” This is a version of Reason 4 from Glewwe and Muralidharan above.

These papers remind us that economists need to be detectives as well as plumbers, especially in the context of insignificant results.

Towards the end of the paper that began this post, Abadie writes that “we advocate a visible reporting and discussion of non-significant results in empirical practice.” I agree. Non-significant results can change our minds. They can teach us. But authors have to do the work to show readers what they should learn. And editors and reviewers need to be open to it.

What else can you read about this topic?

We -- and the Government of Malawi, who run the program we evaluated, and the World Bank, its major funder -- thought the country's large public works program would improve food security and increase use of fertilizer. We set out to study design variants that might make the program more effective, but instead, learned that it has no effect on either food security or fertilizer use (https://www.sciencedirect.com/science/article/pii/S0304387817300354). These aren't just imprecisely estimated effects -- we can rule out any meaningful improvements in the outcomes specifically targeted by the program.
We had a hard time getting either academics or policy makers to accept these results. Part of that is a shortcoming of the research itself; we can't explain why the program fails, though we can rule out many of the mechanisms that have been suggested, and therefore the research doesn't provide specific advice about what would fix it. But I concur, it's hard to publish or to engage in policy discussions around a null result, even if it's a null for an expensive and large-scale program!

When Kathleen Beegle, Emanuela Galasso, and I set out to study the large public works program in Malawi, we shared the expectations of the Government of Malawi, which ran the program, and the World Bank, which funded it, that it would likely improve food security and increase the use of fertilizer. We anticipated that our experiment would help improve the design of the program, and would allow us to study seasonality in consumption and liquidity constraints. Instead, we learned that the program just doesn’t work as intended. From our paper, “The effect of the program on the PCA index of food security is close to zero (-0.079, in column seven). The 95 percent confidence interval excludes positive impacts of greater than 0.08 standard deviations relative to the outcome in the control group. Overall, a program designed to improve food security did not: households offered the opportunity to participate in public works in November/December 2012 and January 2013 did not have better food security during the lean season than households in villages without a public works program.” (https://www.sciencedirect.com/science/article/pii/S0304387817300354)
It was hard to get either academics or policy makers to accept the results, even though this is an expensive program that is a major part of the social safety net in a very poor country. Part of that reaction is a because of a limitation of the study itself – we can’t pin down the reason that the program doesn’t work, and therefore, we can’t offer specific advice about how to fix it. I also think it’s fair to be reluctant to update strong priors on the basis of a single study, even if it’s large and well-identified. However, I think we as a profession have to be careful not to be more skeptical of null results than of positive treatment effects!

Thanks for a fun and useful post Dave! You requested links in the comments. Here's what I've written on the topic of null results: https://researchforevidence.fhi360.org/null-results-should-produce-answ…

Great post with a collection of interesting results. Thanks very much!

This post is only halfway to where it should be: It never mentions reasons for "nonsignficance" like lack of power or precision, so that the "nonsignficant" results are unsurprising simply because the study was too low in statistical information (e.g., too small) to detect what was expected.
At least that problem is touched on by "authors taking special care to highlight what they can rule out" - provided that "rule out" means something more than outside a 95% confidence interval. Otherwise, the authors do not realize how weak P

The "most devastating" of all false beliefs is probably that "if a difference or relation is not statistically significant, then it is zero, or at least so small that it can safely be considered to be zero" (Schmidt 1996). For an explanation and many further quotes and references, see also Amrhein V, Korner-Nievergelt F, Roth T. (2017) The earth is flat (p > 0.05): significance thresholds and the crisis of unreplicable research. PeerJ 5:e3544. https://peerj.com/articles/3544

I regret to say that the idea presented here is not compatible with the "Neyman-Peason" theory, the basis of discussion with p-value. In the theory, if p>0.05, it implies that you CANNOT deny the null hypothesis: you cannot say anything. Indeed the possibility that the intervention did not work is left, you cannot deduce it scientifically. Of course you can investigate why it is not significant, but then, you are out of "Neyman-Peason" theory and the p-value turns meaningless.

On a superficial note, I just LOVE the tittles of the papers!

I love the way this is written! - Quite apart from the substance of the paper, of course, which is also great.