Withholding regimes where third parties collect and remit taxes are ubiquitous. For example, in most countries, employers withhold personal income tax from employees’ monthly paychecks, and this amount is compensated from the annual tax return. Withholding of business income is particularly common in developing countries where governments lack the resources and capacity to accurately measure and tax firm activity (Slemrod, 2008; Brockmeyer and Hernandez, 2019). This collection mechanism relies on financial institutions and large firms to collect taxes owed by other firms in their commercial network. Its use has surged over the last decade, but little is known about its implications.

In my job market paper, co-authored with Darío Tortarolo, we study the effects of delegating tax collection duties on large firms. Our laboratory is the City of Buenos Aires, Argentina, whereby businesses are required to pay a Turnover Tax on a monthly basis. Historically, a few key players were enrolled as Collection Agents (CAs) and had to withhold taxes from their commercial partners. We analyze an unexpected and major expansion of the withholding scheme in November 2016, where firms with 2015 annual income above 60 million pesos–roughly 4 million dollars–were appointed to act as CAs (Figure 1). As a result, these firms’ trade partners–who previously had to pay the tax liability directly to the tax authority–started to pay the tax in advance whenever they made a transaction with CAs. In short, the newly-appointed CAs now had to charge an additional amount when selling goods to clients or subtract part of the invoice when purchasing goods from suppliers. This implied an increase in the share of taxpayers’ tax liability collected indirectly at source by CAs in lieu of direct payments to the tax authority.

We combine this unique reform with rich firm-to-firm administrative data to estimate the direct effect of expanding the withholding scheme on CAs–that is, the firms who are put to the task of collecting taxes–and the indirect effect on their trade partners who now face an increase in the amount of taxes being withheld at source. In this blog post we provide some insights on our main findings. 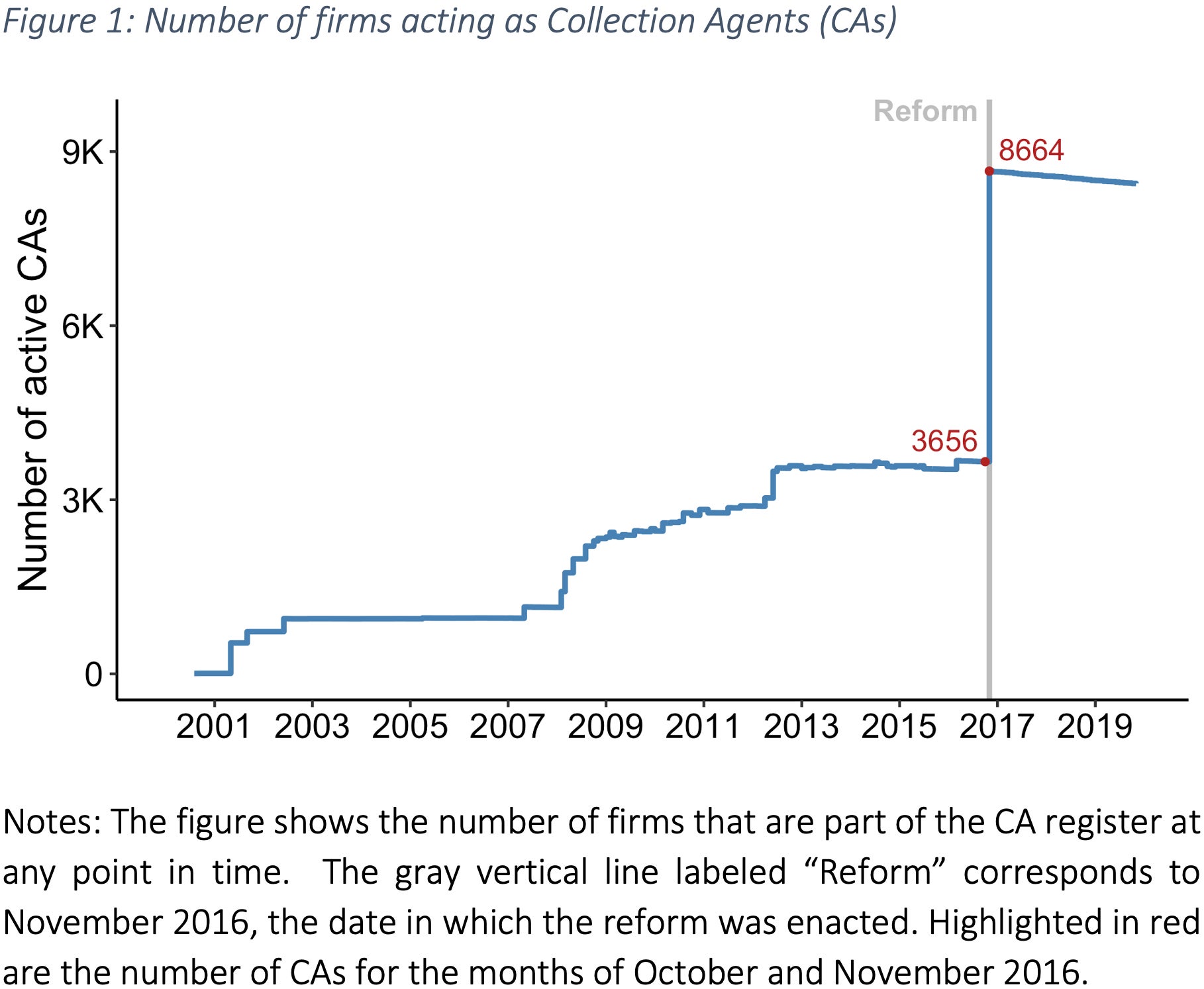 Does appointing firms to collect taxes on behalf of the government hurt firm performance?

There are several reasons to think that being appointed as CA might have a negative impact on firms. First, withholding is an administrative burden as it requires CAs to keep track of transactions with trade partners and to file information tax returns. Second, appointment leads to closer scrutiny from the tax administration as CAs must now work side-by-side with government officials.

We use a regression discontinuity design that exploits the ’60 million pesos’ cutoff rule used for enrollment of firms into the program to test whether firms on either side of the threshold fared differently. We do not find evidence suggesting an impact on CA business activity. This result might be due to appointed firms being among the largest–and presumably most formal–in the economy, with highly streamlined tax filing practices, such that collecting taxes from partners and remitting them to the government does not imply an increased burden or a change in enforcement perceptions.

How does appointing firms as tax collectors affect their trade partners?

Next, we move on to the analysis of indirect effects. Our goal is to understand what happens when a firm who was previously paying most of its taxes via self-reported declarations faces an increase in the amount of taxes withheld at source by a third party.

The ideal experiment to answer this question would be to randomly allocate CAs throughout the economy and compare the differential response of firms who have commercial linkages with them relative to those who do not. While we cannot randomly assign tax collection duties across firms, we can leverage on the design of the 2016 reform and use the built-in variation in exposure to CAs to provide a causal effect of withholding on compliance.

More specifically, we rely on the following quasi-experiment. For firms not directly targeted by the reform–that is, regular taxpayers–the changes that took place in November 2016 had no immediate consequences. However, some taxpayers saw a larger increase in the number of CAs withholding from them as a by-product of their commercial linkages. This change in the number of CAs was arguably exogenous for them as it is unlikely that their choice of commercial partners would have been related to the size threshold used by the appointment rule.

We implement a differences-in-differences design relying on taxpayers’ differential exposure to newly appointed CAs. This allows us to distinguish the effect of withholding on compliance from other time-varying shocks that might have occurred around the time of the reform. We use business-to-business transactions to trace-out the linkages between firms and construct our treatment and control groups: taxpayers who are connected to new CAs and taxpayers who are not connected to new CAs, respectively. In other words, we compare two very similar groups of taxpayers except for the fact that one group experienced a change in the way taxes are collected–from “direct payment” to “withholding”–while the other group did not.

Taxpayers exposed to new CAs exhibit an increase in the share of taxes withheld at source (first stage) and an increase in their reported sales (reduced form). Figure 2 plots the event study specifications that summarize these findings. In panel A we show the first stage of the analysis: the share of taxes withheld by CAs evolve similarly for both groups in the pre-reform period and, right at the time of the reform, there is a sharp increase for treated firms. This confirms that high exposure to new CAs leads to a larger bite in terms of withheld funds. In panel B we show the behavioral response of firms: there is an immediate increase in reported sales right at the time of the reform. Overall, the estimates suggest that treated firms increased their tax base by about 5.5 percentage points relative to the control group. This effect increases over time, reaching about 9 percentage points by the end of 2019. We find a similar-sized effect on tax revenue.

A way to rationalize these results is as follows. Prior to the change in the collection scheme, taxpayers could underreport sales since there was little to no third-party information coverage. When a trade partner is appointed CA and transactions become subject to withholding, these transactions are revealed to the tax authority as third-party information that sets a lower bound on self-reported sales. Our results suggest that withholding by large firms can be an effective tax collection tool. On the one hand, appointing firms to collect taxes did not seem to hurt their activity directly. On the other hand, substituting direct payments for withholding at source increases reported sales of firms linked to CAs which, in turn, increases total tax revenue. These results are in line with recent research suggesting that reforms to tax administrations can have a considerable impact when it comes to raising revenue and building tax capacity. Ultimately, we believe that our collection setting and findings can illuminate the tax development path to improving tax collection systems in transitioning low- and middle-income countries.

Pablo Garriga is a PhD candidate at Brown University. His main research interests are in public economics and development economics. For more about his research visit: https://pablogarriga.github.io/