This is the tenth in our series of posts by PhD students on the job market this year.

An established view considers the reduction of domestic trade barriers a necessity for countries to fully reap the benefits from increased access to international markets. My research is motivated by the converse of this argument. Are the gains from international trade amplified by reductions in intra-national costs of trade? Could that translate to lower prices consumers face in domestic markets?

In my job market paper, I explore these questions by examining the relationship between export activity and prices faced by domestic consumers in a large developing country, India. I consider the case of rice, the staple food grain for at least 650 million Indians, and exploit a natural experiment provided by India’s unanticipated and prolonged rice export restrictions during 2007-2011.

My main finding illustrates that exports can benefit domestic consumers by lowering retail prices. I show that, after exports are restricted, rice prices faced by domestic consumers experience a larger increase in districts more exposed to export activity. I document complementarities between export activity and domestic trade as the main force driving my results. By forming synergies with exports, domestic sellers face lower intra-national trade costs, which then translate to lower prices for consumers. When exports are restricted, these synergies are no longer feasible, and prices increase.

When world food prices started increasing in 2007, the Indian government feared that rice would flow out of the country and there would be a food shortage if exports were permitted to continue. In response, India first restricted, and then completely banned, rice exports after October, 2007. The restrictions were lifted in September, 2011, well over 2 years after world prices had fallen from its 2008-09 peaks.

The export restrictions were intended to benefit consumers, even at a possible cost to producers. Ensuring rice supplies and price stability are important policy objectives for the government. As poor Indians spend as much as 57 percent of their food budget on rice (Atkin, 2013), price increases disproportionately affect the poor. Throughout my paper, I consider primarily poor consumers by focusing on prices in rural consumer markets.

I first confirm that producers were considerably harmed by the policy. When exports are restricted, prices received by farmers in rice producing regions of the country decrease by an additional 5 percent compared to all other regions. However, there is little evidence to show that these lower prices transmitted to consumers. A simple pre-post comparison, for instance, shows consumer prices increased across the country. These findings suggest the presence of complementarities between exports and domestic consumer prices. I focus on one such complementarity: intra-national trade costs.

Why would there be Complementarities between Exports and Domestic Trade?

By connecting with exporters, domestic sellers encounter several lower costs of trade. For example, domestic sellers pay exporters a quarter of the cost of hiring a truck if they use only a quarter of its capacity. In the absence of exports, they would either pay the full cost or store their goods till the shipment size is large enough to utilize a greater capacity of the truck. However, storage is costly, particularly for food grains which can perish if exposed to pests or bad weather. Delays too are expensive if they affect relationships with buyers and future market access. Further, monitoring and coordination of the actual transportation of produce to distant markets are also potentially costly activities where connecting with exports is valuable. Therefore, the formation of synergies with export activity presents domestic sellers cost advantages across multiple endeavors.

Which are the Consumer Markets that Benefit Most from the Complementarities?

To identify the incidental districts, I use India’s entire road network to trace the shortest route between each rice producing district and the nearest port through which rice is exported. If a district lies on any of these routes, I classify it as incidental. 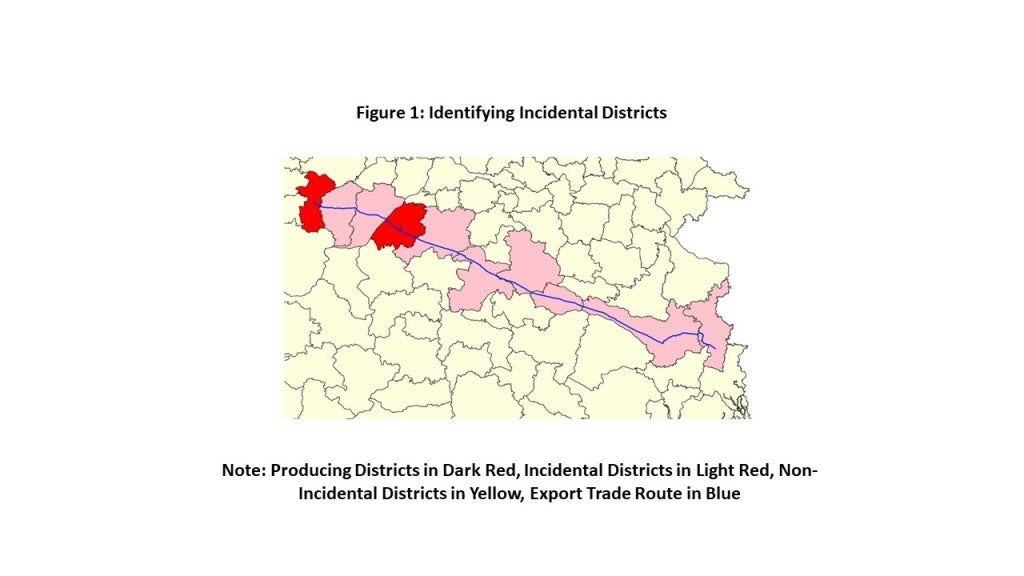 For identification, my empirical DiD specification compares prices in incidental versus non-incidental districts before and after the onset of export restrictions. In my main results, I interpret the DiD estimate as the effect on consumer prices caused by (the lack of) export activity.

…And Can Afford Lower Quality Products

The export restrictions have a stronger effect on the prices of higher quality rice varieties, compared to lower quality ones. For instance, the price of superior fine-grained rice increased by an additional 6.6 percent in incidental districts. The increase was only 3.6 percent for inferior coarse-grained rice. As high quality rice comprises a major share of exports, the complementarities benefiting domestic trade are stronger for premium rice varieties. When exports are restricted, trade costs, and subsequently prices, increase more for high quality products. 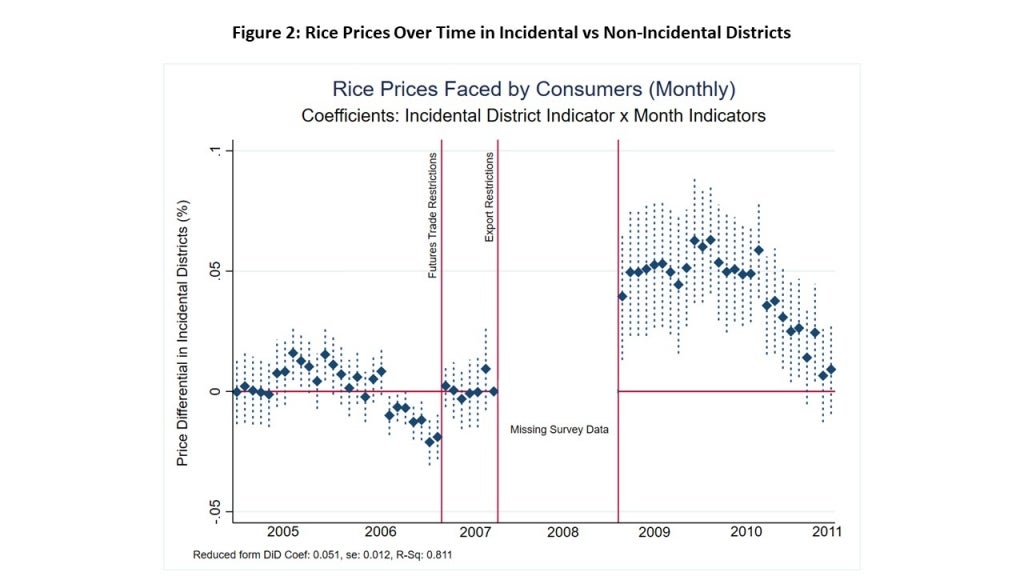 Note: Unfortunately, the Rural Price Collection Survey, the main source of administrative price data, was not conducted in 2008 and hence, the missing survey data.

How Do I Tell that the Price Effects are Due to the Trade Cost, and not other, Complementarities?

There are likely to be several complementarities between exports and domestic trade, perhaps most notably scale economies in production. However, for these other complementarities to have driven my results, it would have to be that they also affect prices more strongly in districts through which rice exports are transported, instead of all regions across the country. This is rather implausible to have been the case.

A more plausible channel is that the high world food prices of the time differentially affected districts that lie along major trade routes. While this effect cannot be directly separated from the effect of the lack of export activity for rice, I provide evidence against this channel by showing that there is no differential change in prices in districts between producing regions and ports for wheat, a commodity that is India’s second-most consumed food grain and whose prices also rapidly increased in world markets at the time.

What are Some Other Effects of the Increased Prices? Do they Also Impact Consumption?

I document that rice consumption decreased by 5 percent due to the export restrictions. But, there is no discernible change in expenditures incurred on rice. Taken together, the high prices lead poor households to cut their consumption of rice, even after they continue to spend a similar amount of money on purchasing rice. As rice is an important staple food in the diets of poor Indians, these findings document the adverse impact of the export restrictions on consumer welfare.

Several large developing economies already have competitive advantages in export markets and are important participants with growing market shares. Policymakers should note that promoting export activity could be a market-driven means of reducing the large intra-national costs of trade prevalent in these countries. While insulating economies to benefit consumers is rarely a fruitful exercise, my research highlights that the gains from export activity extend well beyond producers. By facilitating domestic trade, export activity can reduce domestic consumer prices, improve product quality in domestic markets, and improve overall welfare of poor consumers in developing countries.

Utsav Manjeer is a PhD Student at Northwestern University.