This is the fourteenth in our series of posts by students on the job market this year.

People are afraid of HIV. Moreover, people around the world are convinced that the virus is easier to get than it actually is. The median person thinks that if you have unprotected sex with an HIV-positive person a single time, you will get HIV for sure. The truth is that it’s not nearly that easy to get HIV – the medical literature estimates that the transmission rate is actually about 0.1% per sex act, or 10% per year.

One way of interpreting these big overestimates of risks is that HIV education is working. Almost everyone knows what HIV is (even back in 2004, the share of Malawians who had never heard of HIV was less than 1%), and they’re really scared they will contract it if they have unprotected sex. The classic risk compensation model says this should be causing reductions in unprotected sex.

Unfortunately, the risk compensation story doesn’t seem to be reflected in actual behavior – at least not in sub-Saharan Africa, where the HIV epidemic is at its worst. Emily Oster finds that rises in the prevalence of HIV barely affect people’s sexual behavior in Africa. In Malawi, where over one in ten people have HIV – the ninth-worst HIV epidemic in the world – condoms are used for only 12% of all sex acts.  If people are so scared, why don’t they seem to be compensating away from the risk of HIV infection? I tackle that question in my job market paper, “The Effect of HIV Risk Beliefs on Risky Sexual Behavior: Scared Straight or Scared to Death?” My answer is surprising. Some people are so scared of HIV that they are fatalistic – they respond to higher risks by having more sex instead of less. This offsets the decreases in sexual activity by the rest of the population, leading to a small average response.

I begin by showing that this fatalistic responses are actually rational, as long as the perceived risk is high enough. The reason is the following: if the risk of each sex act is high enough, and you have at least one exposure, then the chance you already have HIV can get really close to 100%. If the probability that you are doomed no matter what gets high enough, the marginal cost of having more sex gets really small. This means that if people think the risk of contracting HIV is high enough, the effect of risk beliefs on sexual activity will actually switch signs from negative (classic risk compensation) to positive (fatalism).

I test this prediction by running a field experiment with a probability sample of sexually-active adults from Southern Malawi. Half of the villages in the study were randomly assigned to receive information about the HIV transmission rate. The figure they were taught is the high end of the range available on the Malawi National AIDS Commission’s website: page 19 of this document says the risk is 5 to 10% per year. The 10% per year figure is also consistent with the medical literature on HIV transmission.

Teaching people the true risk of HIV transmission represents a sharp break with typical HIV messaging, which usually emphasizes that risks are really high. But it’s consistent with the first basic ethical principle of the Belmont Report, which emphasizes respecting people’s autonomy. The report says that people shouldn’t be denied the information necessary to make considered judgments unless there is a compelling reason to do so. In the case of information about HIV risks, the evidence in favor of keeping the truth from people was pretty limited: Oster’s paper shows that average responses to HIV risks are very small in Africa, and qualitative evidence suggests fatalism may be a big problem in Southern Malawi. Moreover, we really didn’t know how people would react: my experiment was the first ever to test what would happen if people were taught the true transmission rate. The study was overseen and approved by both COMREC, which is the IRB of the University of Malawi College of Medicine, and by IRB-HSBS at the University of Michigan.

The information treatment led to a large decrease in the risk people perceive of contracting HIV from unprotected sex. It also led to a small increase – on average – in how much sex people have, by about 10%, or around one sex act every six weeks. I use these changes to estimate that the average HIV risk elasticity – the percent change in sexual activity for a given percent change in perceived risks – by two-stage least squares. I estimate that the mean elasticity is -0.6: a 10% rise in the perceived risk of HIV infection causes the average person to have 6% less sex. But my model says that the average is misleading; the elasticity will vary across the population based on people’s initial level of HIV risk beliefs. To test that implication, I develop a novel method to decompose my 2SLS estimates by people’s baseline risk beliefs.

This approach begins by estimating two semiparametric regressions of sexual activity as a function of baseline risk beliefs, one each for the treatment and control groups. Taking the difference of the estimated curves gives me a reduced-form treatment effect estimate for each value of baseline beliefs. I then repeat that process for the first-stage effect of the treatment on people’s risk beliefs. Dividing the reduced-form graph by the first-stage graph yields elasticity estimates for each point in the baseline risk belief distribution.  The result, shown below, is a graph of the risk belief elasticity of sexual activity for each value of initial risk beliefs. 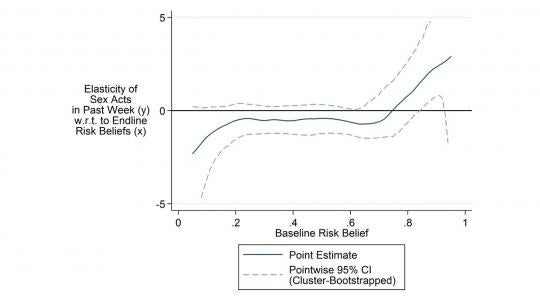 The graph shows that the classic risk compensation story applies to most people – the numbers are negative for most of them. But for people whose initial risk beliefs were over 0.75, the elasticity is actually positive: higher risks actually lead to more risk-taking. At the high end, the elasticity is positive 2.9. For these fatalistic people, a 10% increase in the perceived risk causes a 20% increase in how much sex they have. These people learned the risk was lower than they thought, and realized they weren’t doomed, and that being careful was worthwhile - exactly consistent with my model.

I show that the fatalistic part of the population is more sexually experienced and more likely to think they are currently HIV positive than the typical person. (These differences don’t drive my results – the heterogeneity by baseline risk beliefs is robust to including interactions between the treatment indicator and a wide range of other baseline observables). Since fatalistic people have higher risk factors for HIV, the de facto policy of “scaring people straight” – exaggerating how easy it is to contract HIV – is backfiring for exactly the wrong group of people. This finding is made more stark by the fact that the overall spread of HIV is dominated by small groups of high-activity people – which my results suggest could well be fatalistic.

My findings also have important implications for the study of risk compensation more generally. We typically study behavioral responses to changes in actual or perceived risks by assuming the function is monotonic. If that’s true, then a regression of behavior on a linear function of the risk will give us a useful summary of risk responses. I show that that regression – even if we use instrumental variables or the like to get around endogeneity concerns – may be misspecified. Empirical analyses of risk compensation should allow for the possibility of fatalism whenever perceived risks are extremely high.

Jason Kerwin is a Ph.D. Candidate in Economics at the University of Michigan. More details about his research can be found on his personal webpage. He also maintains a blog, Ceteris Non Paribus.

Great stuff! I've wanted to see precisely this paper for a while. I think it's morally opprobrious that we exaggerate the risks to people, and it's very interesting to also see that this backfires through the previously only theorized fatalism channel.

I was 12 when magic Johnson came out that he wasHIV positive. I am now 37 and sex still scares me and I can honestly say I barely get any enjoyment out of it. This was helpful I'll relax a little bit more

my partner of six years is HIV positive,this has affected our sexual relationship and we do not have any child yet,because of his condition.he has been on hiv drug all this while and the VL shows 0.1%,can we make love without me contacting the virus?

You should consult a physician by visiting a health clinic in your area.

Talk to your doctor about pre-exposure prophylaxis (PrEP). This is a HIV prevention pill that you take daily. It’s known to reduce your chances of contracting the virus. If your doctor thinks you’re a good candidate for PrEP, they’ll prescribe it to help lower your risk of getting HIV.