The promise and limitations of cash transfers to adolescent females

When you have to redo your literature review for a “revise and resubmit,” you know two things: first, the publishing process in economics is slow, and second, the evidence is accumulating fast in your subject matter. The former is what it is and the latter is good. Into the rapidly growing literature regarding the effects of cash transfers on sustained human capital accumulation for adolescent females comes this paper by Baird, McIntosh, and Özler (forthcoming in the Journal of Development Economics).

The paper attempts to provide a comprehensive assessment of the relative effects of conditional (CCT) and unconditional (UCT) cash transfers targeted to adolescents for two years during a period of transition into adulthood – conducted more than two years after they stopped receiving the transfers. The picture that emerges is mixed, reminding us that while there may be some room for optimism for durable effects in certain areas, such programs are limited in their effects – with short-term effects failing to translate into increased welfare in the longer-run.

CCTs caused sustained effects on school attainment, incidence of marriage and pregnancy, age at first birth, total number of births, and desired fertility – but only among the stratum of adolescent females who had already dropped out of school at baseline (see Tables III, IV, and S3). Conditional transfers were highly effective in allowing a very large share of this group to return to school. Knock-on effects on marriage and fertility were possible – most likely because of the large-sized effect on school attainment. These findings align nicely with Duflo, Dupas and Kremer (2017), who find that by age 25 Ghanaian students who were offered a secondary school scholarship were 26 percentage points more likely to complete secondary school and had 0.217 fewer children—again suggesting the importance of the magnitude of the education effect.

However, even in this group, there were no gains in other important outcomes, such as individual earnings, per capita household consumption, subjective wellbeing, health, or empowerment. While this lack of medium-term effects on these final outcomes is discouraging, it may be premature to conclude that improvements in education will lead to no long-term gains in this sub-group: if the relationship between education and wages becomes steeper with age, or if household-level human capital alters the economic trajectory of these households, future follow-up studies may well reveal longer-term benefits.

The not so good…

The most striking feature of the findings presented in this paper is the transience of the impact of unconditional cash transfers. Substantial reductions in teen marriages, total live births, and HIV infections, as well as improvements in psychological wellbeing and nutritional intake observed at the end of the program were no longer apparent two years later, implying significant but only temporary income effects.

Within months of the cessation of transfers, many UCT beneficiaries became pregnant and were married soon thereafter. The authors observe a spike in marriages and a baby boom among UCT beneficiaries immediately following the end of the program, who also reported lower levels of empowerment compared with both the CCT and the control groups. The catch-up in teen fertility and child marriage was so fast that even mean age at first birth was indistinguishable between the UCT and the control groups. 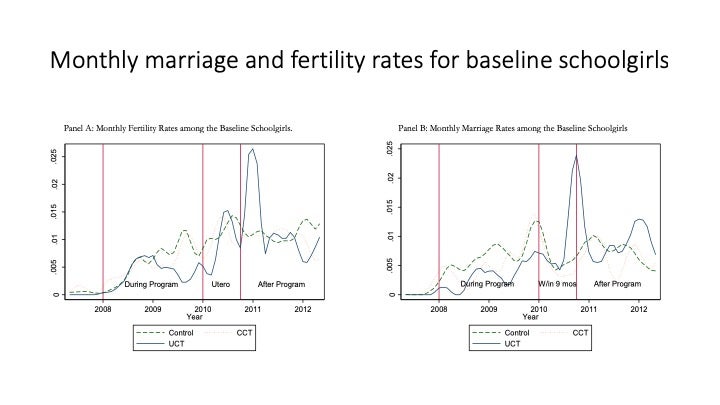 There is, however, one additional (if only suggestive) hopeful note that emerges from the analysis of the data from the five-year follow-up, which contributes to a large literature on the effects of programs that support pregnant women and young children. Policies for child development often target the first 1,000 days from conception to the second birthday (Barham, Macours, and Maluccio 2013). What is novel in this study is that it examines the effects of targeting cash transfers to (initially never-married) adolescent females of childbearing age and provide evidence for the important policy question on the timing of interventions for young women to protect early childhood development. For example, Currie and Almond (2011) state “…one of the more effective ways to improve children's long-term outcomes might be to target women of child bearing age in addition to focusing on children after birth.”

The paper finds support for this view: consistent with improved physical, nutritional, and mental health among UCT recipients during the program, we find suggestive evidence of improved height-for-age z-scores (HAZ) for children born to them during the program. The size of the estimated effect is consistent with Barham, Macours and Maluccio (2013), who report that children in Nicaragua who received three years of cash transfers were 0.2-0.4 SD taller; Agüero, Carter, and Woolard (2006), who find that children in South Africa receiving child support grants for most of the period between 0-3 years of age gained as much as 0.45 SD in HAZ; and Cahyadi et al. (2018), who find that children 0-5 who have been exposed to Indonesia’s CCT program are substantially less likely to be stunted or severely stunted. In the Malawi study, there are no effects of CCTs on HAZ – presumably because participants who became pregnant and gave birth dropped out of school, making them ineligible for transfers conditional on regular school attendance (whereas other CCTs are targeted to mothers or pregnant women). By denying noncompliant adolescent girls and young women cash transfers at precisely the moment when they are most likely to start childbearing, a myriad of potential benefits might be missed under CCT programs. 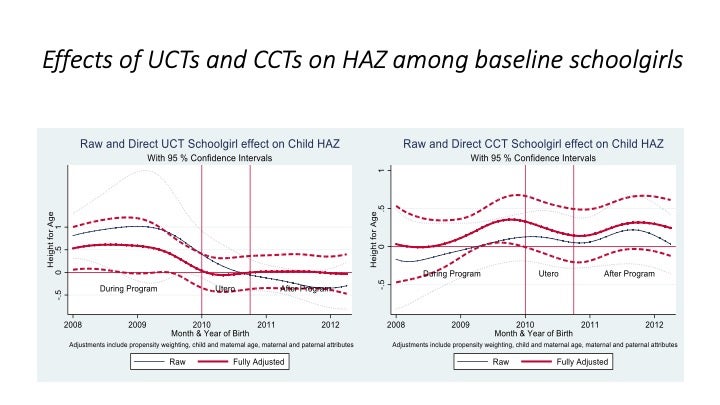 The authors provide a concise discussion at the end of their paper, sharing their interpretations of the findings and providing some thoughts on policy implications. While I strongly urge you to read those 2.5 pages, here is an even shorter summary: