The majority of civil conflicts that took place in Africa since the end of World War II were fought along ethnic lines (Wimmer et al., 2009). Among all the different causes that have been discussed by academics and policy makers, economic inequality has possibly been the most controversial one (Cramer, 2005). Although the idea that more inequality between ethnic groups leads to more conflicts is intuitively appealing, it has been very difficult to empirically prove this link, mostly due to the lack of systematic and disaggregated income data.

In my job market paper, Thorsten Rogall and I tackle this issue by constructing a new measure of inequality based on rainfall data. More specifically, our key measure captures the difference in the amount of rain that falls over the homelands of ethnic groups living within the same country. We use this measure to investigate whether between-group rainfall inequality can help explain ethnic conflict prevalence.

Our approach relies on the link between rainfall and income, which is likely to be particularly strong across the African continent, where the large majority of the labor force is employed in agriculture (World Bank, 2008) and where agriculture is highly dependent on rainfall (less than 7% of the cultivated land in Sub-Saharan Africa was estimated to be irrigated in 2004 (Frenken, 2005). This link has already been exploited in the conflict literature, which has shown that areas that experience rainfall-induced shocks are typically more likely to experience higher risk of violence (see Burke et al. (2015) for a review). But while this literature has focused on the local effect of rainfall, our study investigates the role of the distribution of rainfall across different areas of the country, thereby introducing a new and so far neglected dimension in the analysis.

Two key inputs for the construction of our inequality measure are the map of ethnic homeland boundaries and rainfall data. For the former, we rely on the Soviet Atlas Norodov Mira (see Weidman et al. (2010) for details), which records the location of ethnic groups across the globe as of the 1960s, and which has already been extensively used in the economic literature (e.g. Easterly and Levine, 1997). For the latter, we rely on re-analysis dataset provided by European Centre for Medium-Term Weather Forecasting (ECMWF), which records global weather data with six-hour frequency, at a 1.25 degree resolution. Figure 1 illustrates how we spatially match these sources, combining them with an administrative map of the African continent (areas in white are excluded from the analysis). Overall, the sample includes 42 African countries, which host the homelands of 214 different ethnicities, and covers the period 1982-2001 - i.e. the period for which all data sources are available. 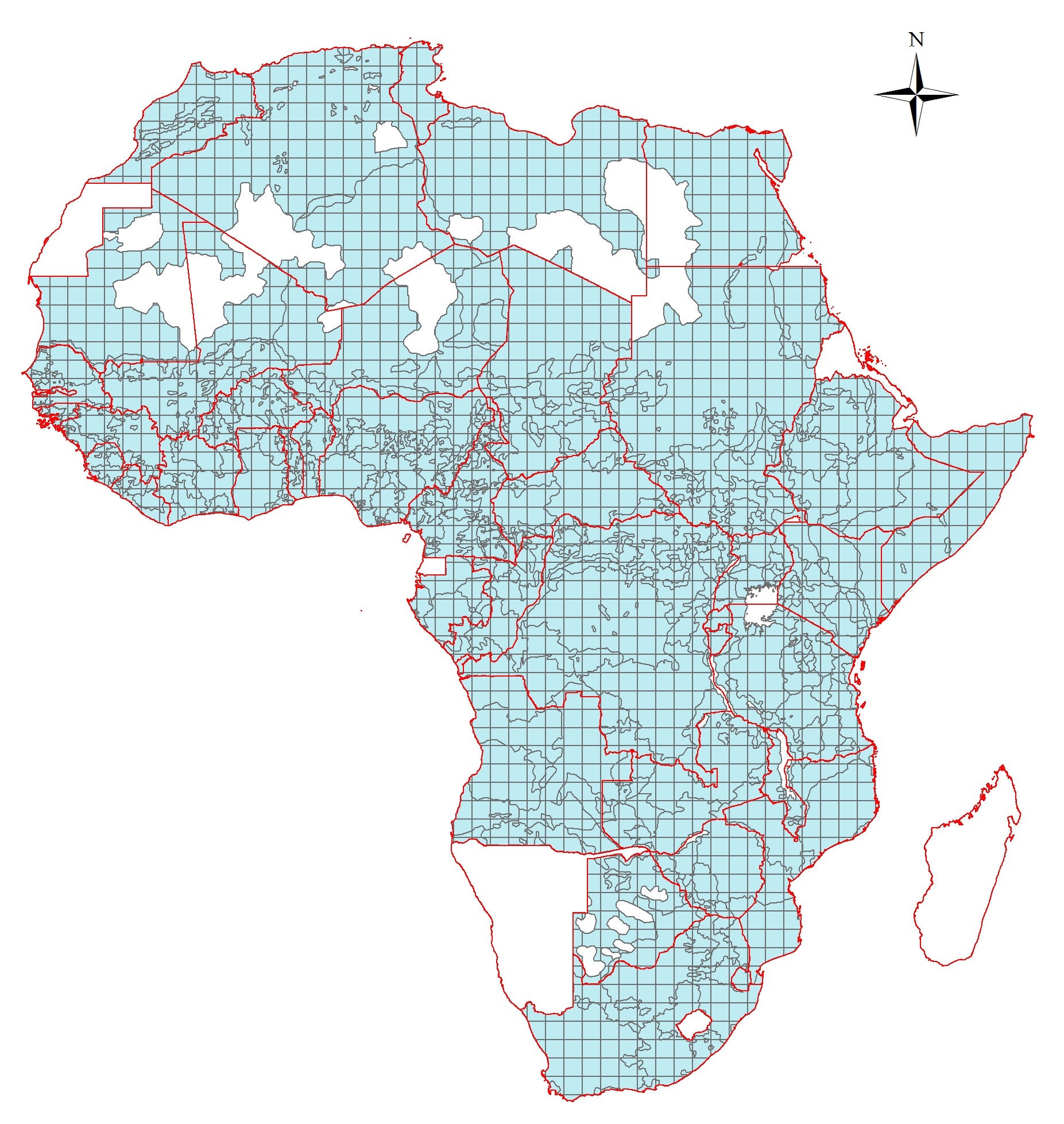 Our results show that Between-Group Rainfall Inequality (BGRI) is a significant predictor of ethnic conflict (figure 2). We estimate that, across the sample, one standard-deviation increase in inequality leads to a 16 percentage points increase in ethnic conflict prevalence. Thus the risk of ethnic conflict almost doubles when compared to the average prevalence in the sample (18%). The effect fully stems from inequality in rainfall during the growing season – which is, when rainfall matters the most for agricultural production and, hence, agricultural income. 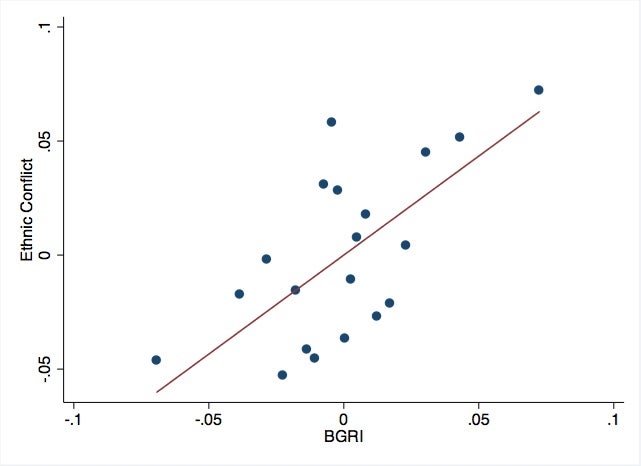 The role of ethnic power relations

Temporary shocks and climatic factors have often been depicted as proximate causes of ethnic conflicts that typically exacerbate pre-existing tensions between groups, related to struggles over power (USAID, 2013). In the second part of the paper, we therefore investigate whether the link between rainfall inequality and ethnic conflicts depends on the specific power relations between the different ethnic groups. We find clear evidence that it does. More specifically, the analysis at the (country-)ethnicity level - based on the Ethnic Power Relations dataset (Girardin et al., 2015) - shows that the increase in ethnic conflict prevalence is driven by settings in which ethnic groups that are excluded from executive power experience a worsening in the amount of rainfall that they receive with respect to the leading ethnic group in the country. This effect does not hold for ethnic groups that share some political power with the leading group and is strongest for groups that have recently lost power. Finally, we find variations in the distribution of rainfall with respect to the leading group to matter more than variations in the local weather conditions of the specific ethnic group. Although we do not have detailed information on which side started the conflict and on the motivations, our findings are consistent with inequality leading to higher conflict prevalence by exacerbating grievances in ethnic groups with no access to political power.

By relying on a novel inequality measure, which exploits an exogenous source of variation, and a rich empirical specification, our paper provides evidence of a strong causal link between inequality and ethnic conflict. Our estimates also provide a clear warning signal in light of the ongoing climate change pattern, which has been found to be associated with more weather variability. Although further analysis will be needed to identify the most appropriate response, the evidence presented here suggests that making agricultural production less dependent on rainfall – for instance by strengthening the irrigation systems – has the potential to reduce ethnic conflict prevalence. Finally, our results suggest that political representation can play an important role in settling ethnic tensions, as we find that groups that have access to some political power are significantly less likely to engage in armed conflict as a response to an increase in resource inequality that penalizes them.

Limitations of the study

Economic inequality is typically considered something quite persistent, as wealth tends to change only slowly over time. Our measure of inequality captures instead short-term changes in the distribution of (agricultural) resources, caused by exogenous year-on-year changes in the distribution of rainfall. This should be kept in mind when interpreting our results, as it means that our measure is ill-suited to test hypotheses related to more persistent economic gaps within the society (see for instance Esteban and Ray, 2008). Moreover, in the absence of disaggregated income data, we are only able to look at the direct effect of rainfall distribution on conflict prevalence. We provide some checks – based on total agricultural output and nightlight density data - that suggest that the exogenous variation we capture maps indeed into variation in income, but we cannot fully rule out that the link between rainfall inequality and conflicts also involves additional channels. The constant improvement in data collection methods will hopefully make available in the near future more systematic income measures, which will allow for a more direct check.

Andrea Guariso is a PhD candidate at KU Leuven. More details about his research can be found here.
Topics
Fragility Conflict and Violence
Regions
Africa