This is the sixth in this year's series of posts by PhD students on the job market.
What connects smallholder farmers in the semi-arid tracts of northwest India to the oil and gas barons of Texas and Oklahoma? A little green bean called guar! The seeds of this humble legume yield a potent thickening agent that greatly enhances the effectiveness of fracking fluid. As the fracking boom started in the United States, demand for guar skyrocketed, resulting in windfall gains for farmers across northwest India, the epicenter of global guar cultivation. Nearly simultaneously, India began rolling out its massive national rural electrification scheme, which prioritized certain villages based on a strict population-based eligibility criterion. In my job market paper, my coauthor Rob Fetter and I combine these two “natural experiments” to show that large-scale grid electrification can dramatically increase non-agricultural employment in rural economies when economic opportunity complements infrastructure—but if these complementary economic conditions are lacking, the grid may scarcely make a dent.

Rural electrification and jobs: A mixed bag
Over a billion people worldwide lack any access to electricity whatsoever, and many more are served by unreliable systems capable of supporting little more than a light bulb. The belief that access to reliable electricity catalyzes job creation and economic growth—reflected in the inclusion of energy access targets as part of the United Nations’ Sustainable Development Goals—has thrust energy to the fore of development policy. Yet the evidence on the labor-market impacts of large-scale efforts to extend the electricity grid remains mixed. Rural electrification appears to have had large positive effects on employment in Brazil and South Africa. Prior evidence from India, on the other hand, suggests that these effects are far more muted. Others have uncovered similarly lackluster impacts in Ethiopia and Rwanda.

This lack of consensus highlights both a significant knowledge gap and a critical policy challenge. If electrification by way of resource-intensive grid expansion is foundational in promoting livelihoods, it represents a necessary first step for development policy. If, on the other hand, expected benefits are highly uncertain—or, worse, illusory—scarce public resources ought to be targeted elsewhere, and cost-effective approaches that enhance access to only rudimentary energy services (such as basic lighting) may be more appropriate.

Is large-scale electrification necessary—if not sufficient—for the structural transformation of rural economies? Northwest India’s guar boom combined with the contemporaneous nationwide rollout of rural electrification presents a unique opportunity to shed light on this question.

Empirical design: Discontinuities in electrification combined with exogenous shock to rural economies
The eligibility rules of India’s rural electrification scheme—formerly known as the Rajiv Gandhi Grameen Vidyutikaran Yojana (RGGVY)—created a discontinuous jump in the probability of a village being electrified. Specifically, the first phase of RGGVY relied on a strict population-based criterion to determine village-level eligibility: only villages containing at least one “habitation” (a spatially distinct cluster of households) with 300 or more people would be electrified. Prior work finds that RGGVY significantly increased electrification rates in Indian villages with populations just above this threshold.

This habitation-level criterion, however, also led to some unusual features in how RGGVY rolled out. Indian villages can have multiple habitations (the average is three, though about half of India’s villages have only one). This means that a village with a relatively large population may have been ineligible under RGGVY if its population was spread out over multiple habitations; a less populous (but more concentrated) village may have made the cut. To ensure our analyses rely on comparable sets of electrified and unelectrified villages, we restrict our analytical sample in two ways. First, we look only at single-habitation villages. This way the habitation population corresponds to the village population. Second, we restrict our analyses to villages whose population lies within a narrow fifty-person bandwidth of the RGGVY cut-off. This way villages just above the cut-off (which were electrified) are broadly comparable to those below it (which were not). This gives us a final analytical sample of nearly 8,000 villages located across India.

With this sample in hand, we use a regression discontinuity design to estimate the local average treatment effect (LATE) of electrification on the share of agricultural and non-agricultural workers in the village population, which we calculate using detailed village-level data from the Indian Census on the composition of the labor force. In particular, we control for all unobserved differences between India’s guar-growing and non-guar regions, and pay close attention to how the exogenous shock to economic activity generated by the guar boom may have interacted with the rollout of electrification and led to differential impacts. 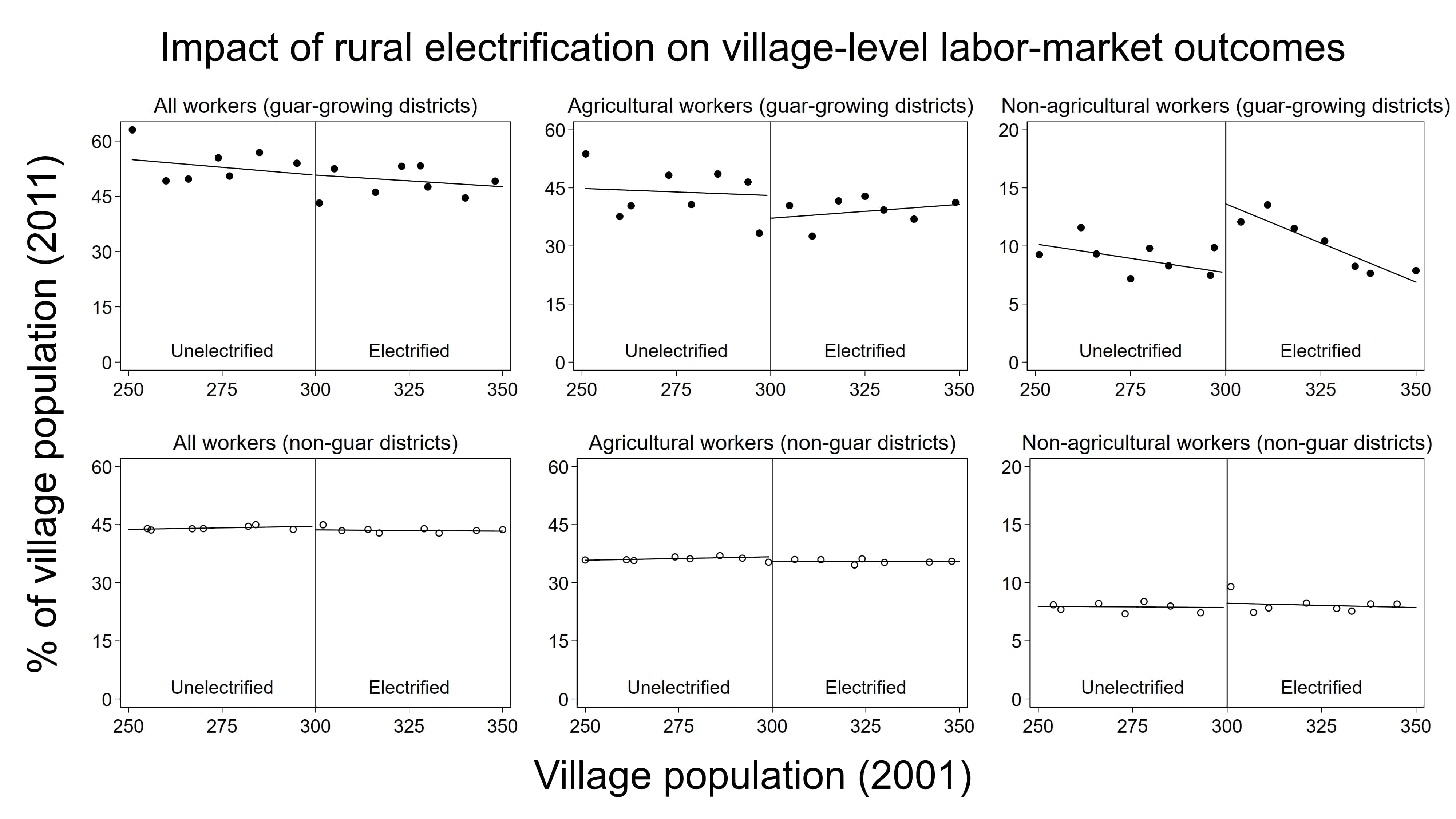 Main result: Electrification drives the growth of non-farm work when economic opportunity exists
We find that electrification led to a large increase in non-agricultural employment in villages located in India’s booming guar-growing regions. Specifically, in guar-region villages with populations just above RGGVY’s eligibility cutoff, the share of non-agricultural workers in the village population rose by approximately six percentage points, representing a 75 percent increase relative to the sample mean of eight percent. At the same time, the corresponding share of agricultural workers fell by eight percentage points (twenty percent relative to the sample mean of 36 percent). Large increases in population do not accompany these labor-market dynamics, suggesting that in-migration does not drive our results. Importantly, in villages located in the rest of the country (unaffected by the guar boom), we find no evidence to suggest that electrification led to any change in non-agricultural employment and only a modest (three percent) reduction in agricultural employment.

Why might non-agricultural employment rise in the booming guar belt? An increase in guar cultivation by small and marginal farmers necessitates a shift in the labor force towards guar processing, which, in contrast to cultivation, is an electricity-intensive industrial activity. A “triple-differences” approach applied to data on the universe of firms in the state of Rajasthan, where eighty percent of India’s guar is grown, uncovers a large increase in the number of workers at firms related to the industrial parts of the guar production chain in electrified, guar-growing areas. This expansion in the “guar-processing” industry appears to come from workers previously not engaged in industrial employment—we see no corresponding fall in employment in firms in unrelated industries, nor in firms in unelectrified or non-guar areas. Using the synthetic control method applied to nighttime luminosity data, we also show that this is not because the economic activity generated by the guar boom is restricted to areas where RGGVY rolled out.

Implications for policymakers and researchers
These findings have significant policy implications. Governments and international organizations alike are mobilizing considerable resources in support of universal energy access, frequently predicating their arguments on the potential to drive job creation and employment growth. In line with a growing body of work, we show that electrification on its own is insufficient in this regard. But we also demonstrate that in the presence of complementary economic opportunities, grid access can allow individuals, households and firms to respond to rapidly changing contexts in potentially welfare-enhancing ways.

In so doing, we adopt a rigorous approach to understand treatment-effect heterogeneity in the real world. That the same intervention can have different impacts in similar settings points to the importance of context-dependence; learning about these contextual factors is crucial to learning from impact evaluations. Where a sufficiently large number of studies have been conducted, rigorous meta-analyses can highlight mechanisms and heterogeneous effects, but in many cases (particularly large-scale interventions) such analyses are rarely possible. Our setting—the combination of an exogenous shock to economic activity with quasi-experimental variation in access to electricity within a regression discontinuity design—provides the first opportunity to rigorously shed light on drivers of heterogeneity in the effects of a large, nationwide rural electrification scheme.

Faraz Usmani is a PhD Candidate in Environmental Economics at Duke University.