People learn from others. Describing this process of learning is of interest to economists in answering many policy questions — how can new health/agricultural technologies be optimally disseminated? how can governments promote prosocial behaviors? More broadly, it is in fact hard to think about a question in economics that has nothing to do with interactions (including learning) in social networks (recent applications to development economics are reviewed here). To analyze social networks, economists model them as a set of relationships between pairs of individuals, where pairs who are connected in the network are more closely linked than pairs who are not connected. For example, in the figure below (from this review paper), individuals ("nodes") are circles, and pairs of individuals ("edges") are connected with a line if those pairs are connected, and are not connected with a line otherwise. 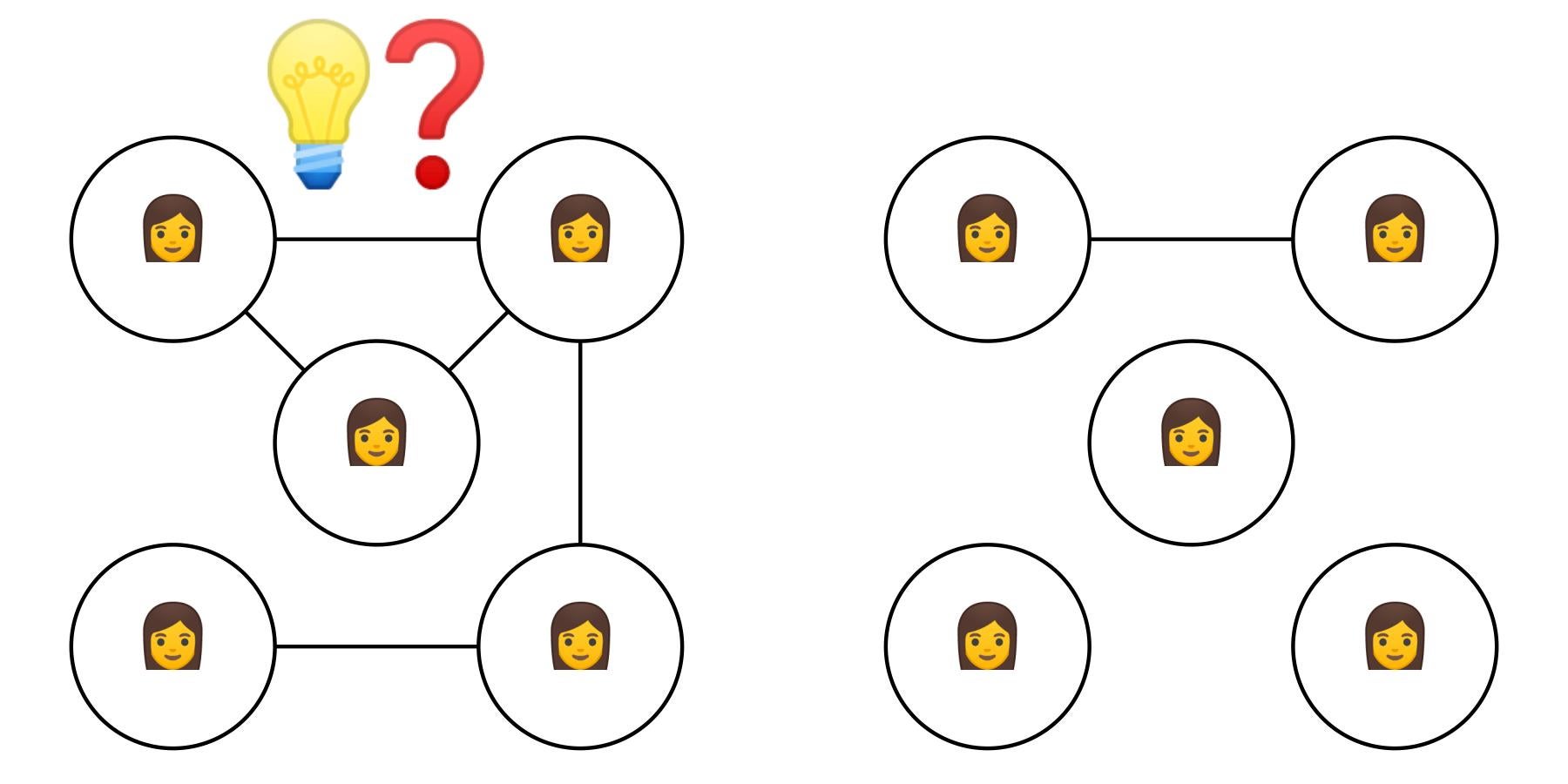 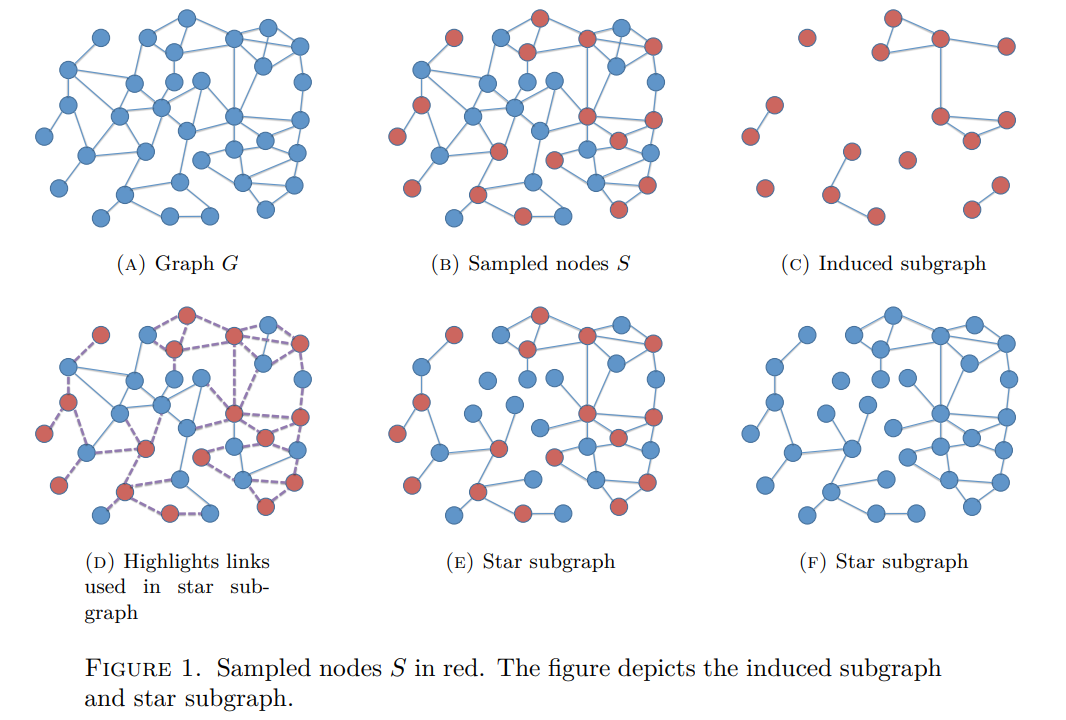 In our example, relying on sampled network data introduces a problem: the connectedness of each community’s social network of farmers is now measured with error, because the surveys we rely on only capture some of the potential connections between farmers. This introduces attenuation bias when we try to estimate whether the technology spreads more quickly in communities that are more connected, because our right hand side (connectedness) is measured with error. AHHHH!?!?! Good news — a number of solutions have been developed to remove this bias when working with sampled social network data!

First, one can avoid the problem altogether, and simply measure every possible social connection within the community! A recent paper by Beaman et al (2018) does exactly this — in order to study the diffusion of a new agricultural practice, they conducted a full census of 200 communities, and surveyed each household on their social connections within the community. This was particularly important in their context, as they were interested in studying whether households needed multiple connections who could introduce the practice to them in order to adopt the practice.

Alternatively, there are simple statistical approaches to correct for measurement error in a regression, including for some characteristics of networks.

Chandrasekhar & Lewis (2016), in addition to providing a general discussion of working with sampled network data, provide formulas for the error for some statistics of networks (e.g., average number of connections, clustering, estimated peer effects). These typically involve two step estimators, where a first step characterizes the distribution of error and the second step adjusts the right hand side given estimated characteristics of the distribution of measurement error. Two nice recent extensions of this approach are Griffith (2020) (who applies it to estimating peer effects) and Hardy et al. (2020) (who apply it to estimating spillovers from treatment).

Alternative approaches to capture more complicated network characteristics include Bayesian approaches. However, these approaches require the researcher to specify prior beliefs on the full set of parameters in their model, including of how the network is formed. This is potentially challenging conceptually and computationally; however, a pair of papers (Breza et al, 2019a; Breza et al, 2019b) propose feasible Bayesian approaches to realistically model a number of features of real life networks, including heterogeneity in clustering and propensity to form connections across individuals with different characteristics.

Further, they highlight that in many contexts, ARD data can be meaningfully cheaper to collect than traditional social network data.

Alternatively, one can approach this problem of making use of a sampled social network by trying to predict the missing links in the network that we don’t observe using the links that we do observe. This problem can be seen as high dimensional: for each connection between two individuals, we have a large number of possible predictors (all of the connections of each individual) that we could use to predict whether those two individuals are connected.

Like most problems with a large number of potential controls, machine learning solutions are possible! A recent paper (Alidaee et al, 2020), building on Negahban and Wainwright (2011), proposes machine learning tools to estimate a model of social network formation.

Finally, Alidaee et al 2020 demonstrate that these tools can be used on the same ARD data that Bayesian approaches can take advantage of, rather than needing to observe the sampled network directly.

With the development of these new tools, sophisticated analyses that were once only possible with a complete mapping of a social network (very expensive! difficult to collect!) are now possible with only a sample of the network, or even with a representation of the network that contains no network data (i.e., ARD)! This makes it possible for development economists running household surveys on tight budgets to answer questions requiring social network data. Many thanks for useful details. Can you provide the link to the papers (...… recent applications to development economics are reviewed here). the 'here' was not hyperlinked. Thanks

We'll update the post with the link! In the meantime the review article is linked here: https://academic.oup.com/oxrep/article-abstract/35/4/678/5651354?redire…

Thanks for the excellent summary! In case anyone wants to use our penalized regression method, implementation is available out-of-the-box using R and Python packages available here: https://github.com/mpleung/ARD