School Management Matters, But Can We Change It?

This blog post is co-authored with Moussa P. Blimpo and Nathalie Lahire.

School Management Matters
Recent test score data has highlighted the crucial role of teachers in education. A series of studies (summarized by Hanushek & Rivkin in the table below), demonstrates that better teachers have big impacts on student performance. This is consistent with – for example – evidence from Chile that better evaluated teachers have better student results, and evidence from Mexico City (p. 109 in Bruns & Luque 2014) that shows better student results for teachers with better classroom management.

Beyond the classroom, does school management matter? Last year, Bloom et al. released the results of a massive data collection exercise, surveying 1,800 schools across 8 countries: the Brazil, Canada, Germany, India, Italy, Sweden, the UK, and the US. They gathered data using an instrument of open-ended questions to measure four broad areas of school management. We provide a simplified description below: These management measures draw on earlier work on workplace management, such as Black & Lynch (2001) and Ichniowski, Shaw, & Prennushi (1997).

Across countries, the differences are stark, as you can see in the figure below. (That’s an average score across the 20 total management questions.) Furthermore, the management score correlates positively and significantly with student test scores, controlling for a variety of factors. (The correlation is highly significant for the pooled sample and for Brazil and for India separately.)

Of course, these shouldn’t be interpreted causally, but to us, they suggest that there is value in exploring school management more. 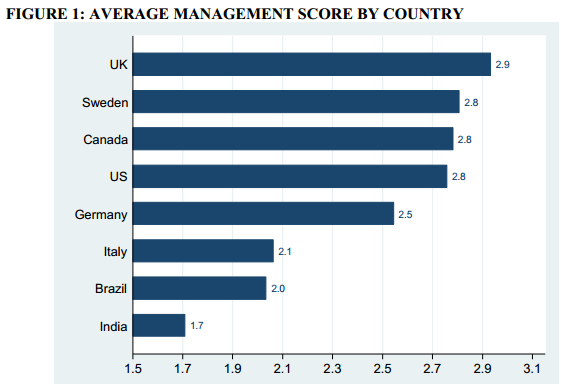 Trying to Change It in The Gambia
In a recent intervention, the government of The Gambia sought to change school management as a way to improving teaching and learning in the classroom. (We’ve just released a paper on it.) The program was called Whole School Development, or WSD. In it, school principals, teachers, and members of the community all participated in a comprehensive school management training program. The program covered six areas: (1) community participation, (2) learner’s welfare and the school environment, (3) curriculum management, (4) teaching and learning resources, (5) teachers’ professional development, and (6) leadership and management. The training lasted between 10 and 20 days, much of it in local language and using drawings to reach non-literate parent participants.

School committees (including the principal, teachers, and parents) were then encouraged to design a school development plan. They received a one-time $500 grant to jumpstart implementation.

In order to evaluate the effectiveness of the program, we worked with the government to randomly assign each of 273 schools into one of three groups: (A) Whole School Development (with a grant), (B) Grant only, and (C) control schools. Comparing WSD to the Grant-only group tells us whether the training did anything, separate from the money. We then followed these schools over four years.

The WSD decreased both student and teacher absenteeism, and it improved at least some measures of teacher practice (teachers calling on students by name, for example). But those intermediate improvements weren’t sufficient to translate into higher average test scores. One possible explanation for that is that the program attracted lower performing students who weren’t enrolled at the beginning of the project to enroll in school; we used Lee’s trimming procedure to check for this and didn’t find any evidence that it’s driving the results.

The grant alone had no impact on either absenteeism or test scores. (The grant did increase parent’s reported involvement in school decision making, however, so apparently they did meet to figure out how to spend the money!)

The Role of Parental Human Capital
If you’re asking parents to get more involved in the management of the school, it likely matters how much human capital the parents themselves have. So we interacted parental literacy (at the district level, which is the level for which it was available), with the two treatments to see if it mattered. It did! The WSD program interacted with adult literacy had a positive, significant impact on student test scores for both math and English. (Still no impact for the grant; sorry, grant!) You can see the relationship in the figure below. When parents have higher human capital, they can more effectively help in school management. 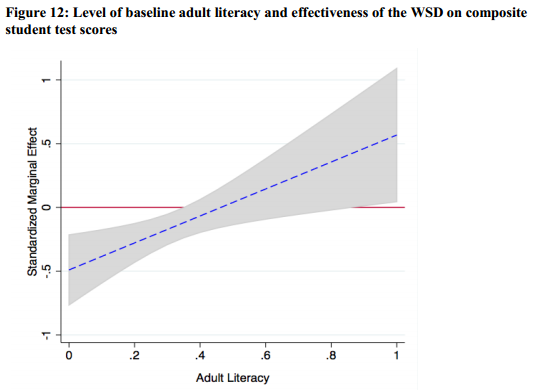 Before we get too excited (and we’re pretty excited), what else could parent literacy be a proxy for? It could be a stand-in for socio-economic status: Richer children have more literate parents and also have access to other resources. But when we interact socio-economic status – measured two different ways, through student interviews and through district-level census data – with the program, the effect is insignificant. What if adult literacy is a proxy for baseline ability of the students? We interact the program variable with baseline student test scores and find no effect.

So, while we can’t rule out every possibility, this evidence strongly suggests that getting the communities involved in managing the school will only be effective at improving student learning if the parents have a critical level of human capital. And while other forms of school management may have improved as a result of the program (through the principal and the teachers, as observed in improved teaching and reduced absenteeism), these weren’t sufficient by themselves to improve student learning. 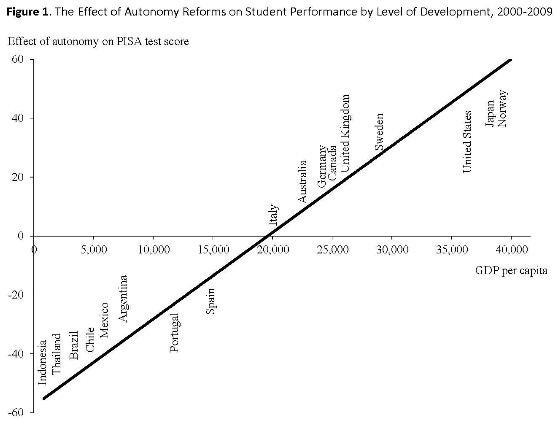 School management matters. But to change it, the agents have to be able to access the training they’re receiving and have the skills and support to put it into action.