Skipping school and how to reduce it? The value of information and incentivizing parents vs. children

This is a guest post jointly authored by Damien de Walque and Christine Valente.

If one of our children is skipping school without our approval and if we have not excused him or her before, my wife and I quickly receive a text message (see screenshot below), an email and a phone call from the school district. A serious discussion in the evening will ensue. 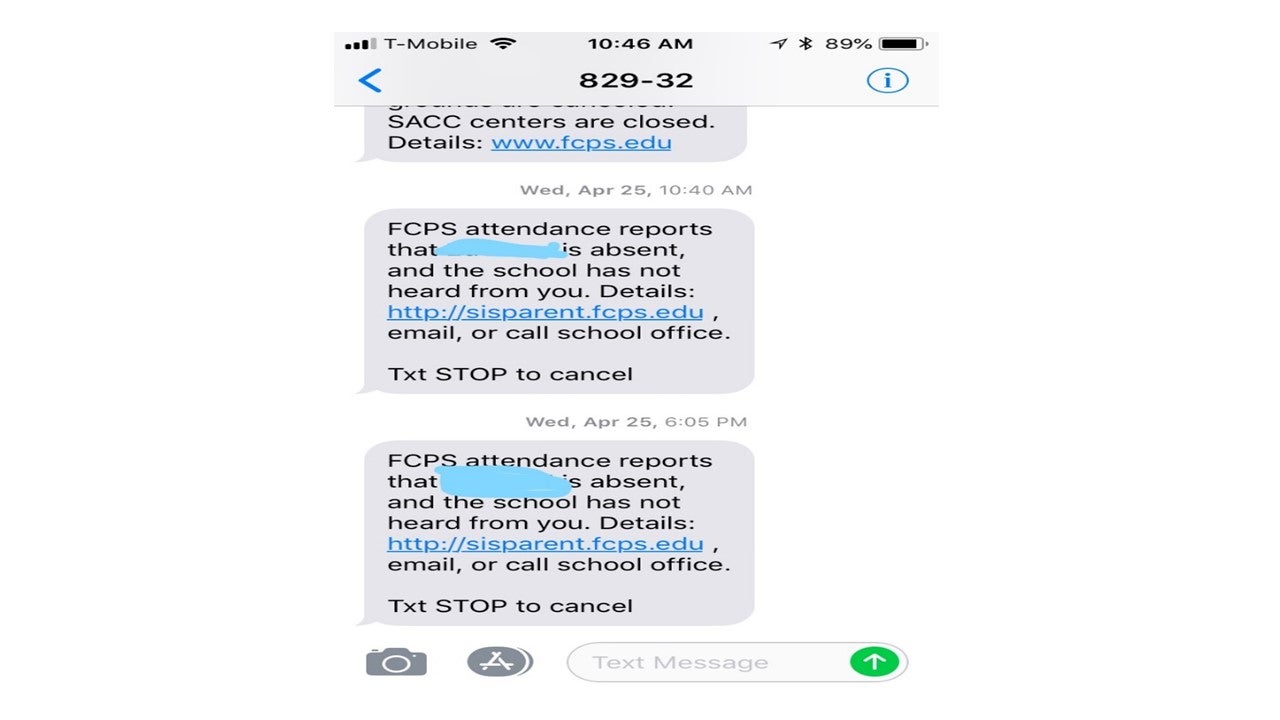 Governments the world over strive to incentivize parents to ensure that their children attend school regularly through subsidies, fines, and truancy laws. In developing countries, arguably the most significant innovation in social policy in the past few decades has been the introduction of conditional cash transfers (CCT) made to parents in order to incentivize a number of prescribed behaviors such as regular school attendance, and which are now implemented in over sixty countries.

The value of information

When parents cannot continuously monitor their children’s actions, however, simply providing information to the parent about child attendance at school may do the job independently of any costly transfer. This is what the text messages I receive from the school district are meant to accomplish.
Despite recent work in family economics suggesting that children take part in household decisions (Dauphin et al., 2011) and recognizing that children may have their own preferences (Dunbar et al., 2013), there is little evidence on the respective role of parents and children in making schooling decisions – one of the key areas of decision affecting children’s lives. Recent research (Lalive and Cattaneo, 2006; Bobonis and Finan, 2009) demonstrates peer effects in attendance decisions and therefore suggest that children take part in decisions over whether they attend school. In fact, when asked, a majority of surveyed children who have dropped out of school by age 15 in India, Ethiopia, Peru and Vietnam say that they themselves played the most important role in deciding to do so. More precisely, 40% in India, 58% in Ethiopia, 65% in Vietnam, and 80% in Peru (calculations based on Young Lives Round 3 data (Boyden, 2014)).

Bursztyn and Coffman (2012) first showed that, in the presence of asymmetry of information regarding school attendance between parents and children, conditional cash transfers may be effective in increasing attendance in part because they improve the parent's ability to monitor their child – at the very least, a parent who receives a transfer conditional on 80% school attendance should be reassured that her child has attended school at least 80% of the time. They further find that parents in a poor urban Brazilian setting value the information component of Bolsa-Escola, the national CCT program. Indeed, Bursztyn and Coffman (2012) find that, in a lab experiment, parents would be willing to forego money to keep the conditionality but would forego the condition if they could be sent text messages about their children’s attendance.

Several recent studies have investigated the effect of improving the information parents receive about attendance (Berlinsky et al., 2017; Rogers and Feller, 2018) and other measures of student effort at school (Bergman, 2016; Bergman and Chan, 2017; Cunha et al., 2017) in urban, middle- to high-income country settings (Santiago de Chile, São Paulo, Philadelphia and Los Angeles). All find significant effects on attendance and, in three out of five cases, on test scores as well.

Information to parents, cash to parents and vouchers for girls

In our study in rural Mozambique entitled “Incentivizing School Attendance in the Presence of Parent-Child Information Frictions” we present experimental evidence of the effect of three alternative policies targeting Mozambican girls in the last two grades of primary school: (1) providing weekly information to parents about their child's attendance (information treatment); (2) providing this information and making cash transfers to parents conditional on attendance – where the maximum annual transfer is worth about 8 times the daily wages of an agricultural laborer or 7% of per capita GDP (CCT treatment); or (3) providing the same information and making transfers of the same nominal value to children in the form of a voucher, also conditional on attendance (child incentive treatment). In that third intervention arm, the girls in Grades 6 and 7 could then use the vouchers to buy a selected number of items like school uniforms, shoes, school bag, etc. In preliminary focus group interviews both parents and children seemed confident that a girl who was given these items would be able to keep them for herself. 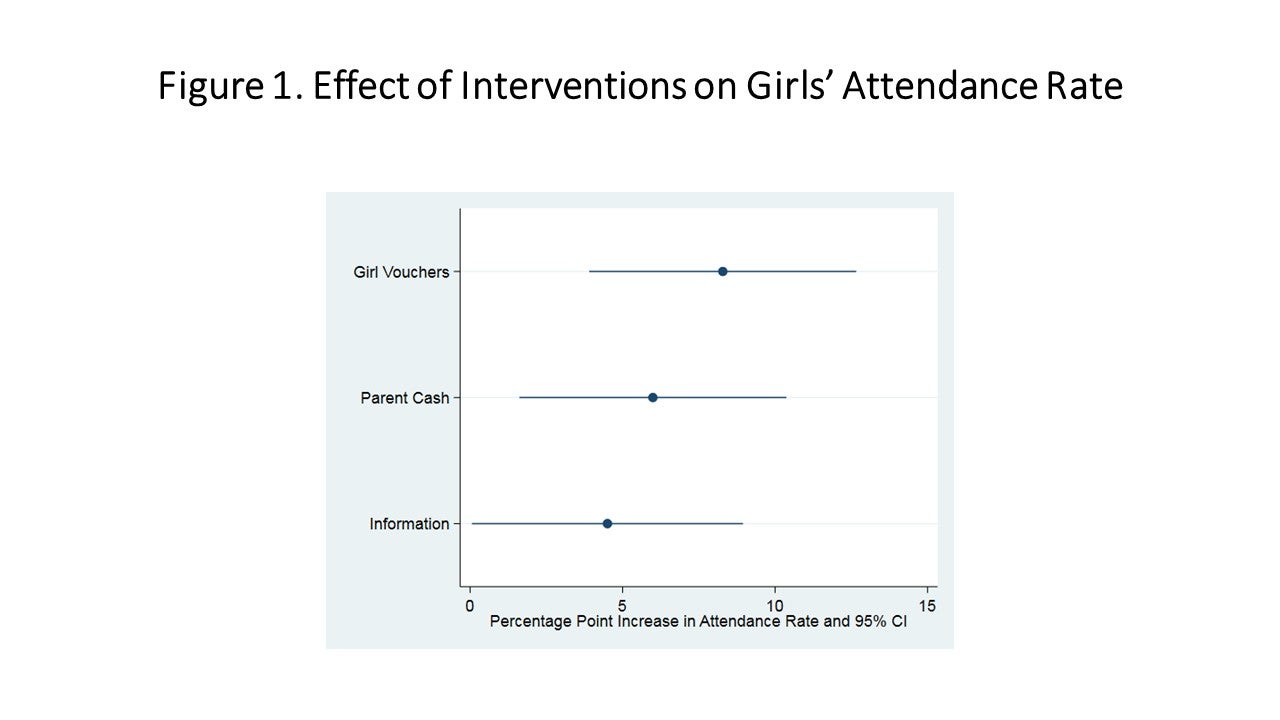 Source: Independent attendance checks in schools (Grades 6 and 7). Each school is given equal weight. Mean attendance rate in control group schools: 64.6%. The effects of the info only and girl vouchers treatments are significantly different at the 10% significance level.

The first conclusion from this experiment is indeed that the information content of a conditional transfer can have a substantial effect on school attendance independently of any transfer. In our study where the value of the transfer is modest but similar to other CCT programs across the world, the estimated effect of the information treatment on attendance is as large as 54% of the child incentive treatment effect and 75% of the effect of the CCT treatment. 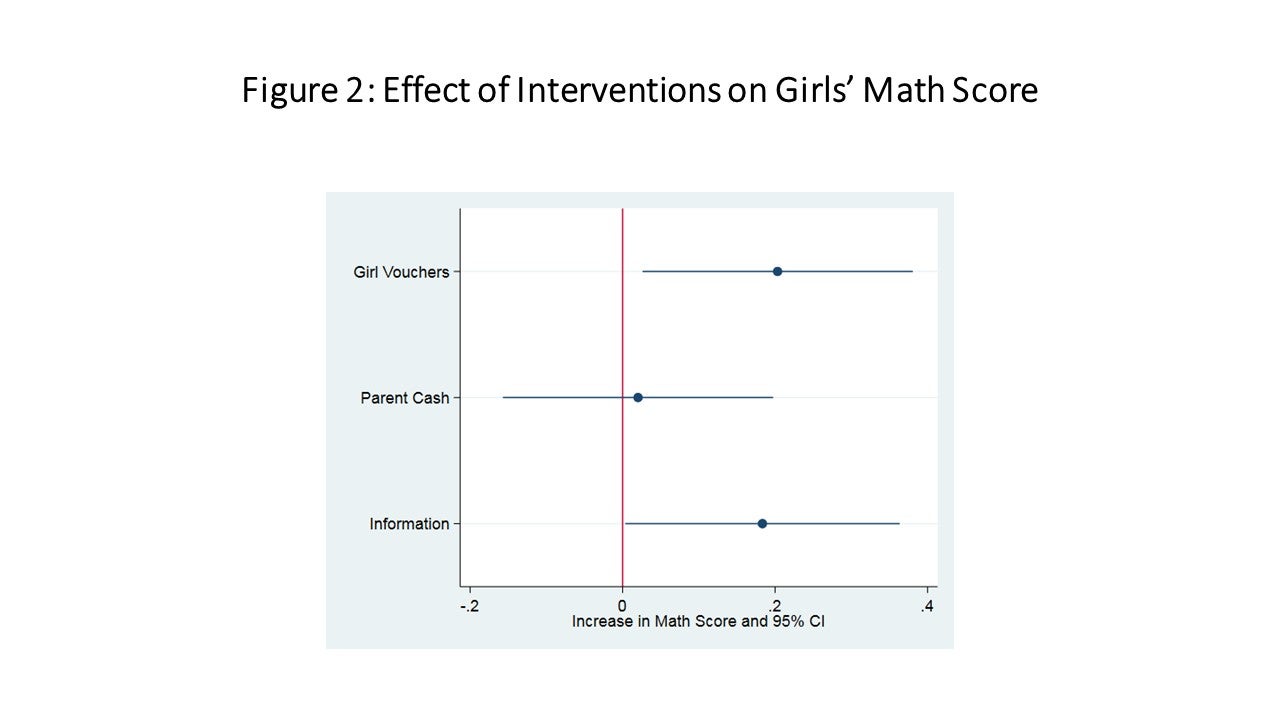 Those results from Mozambique thus also contribute to the literature on the optimal design of cash transfers. Many studies have focused on the role of the conditionality (see Baird et al., 2014 for a meta-analysis and Baird et al., 2011; Benhassine et al., 2015 and Akresh et al., 2016 for experimental comparisons of conditional and unconditional or “labelled” transfers), varied the gender of the recipient (Benhassine et al., 2015; Akresh et al., 2016; Haushofer and Shapiro, forthcoming), and studied the optimal timing of the transfers (Barrera-Osorio et al., 2011). But little is known about the effectiveness of incentivizing children vs. incentivizing parents. Two papers compare experimentally the effect of incentivizing parents relative to incentivizing children to achieve an attendance (Baird et al., 2011) or performance target (Berry, 2016). Baird et al. (2011) vary experimentally the amount of cash given to parents (from $4 to $10) and that given to adolescent girls (from $1 to $5) in Malawi and in their CCT arm find similar effects on enrollment and on English test scores for each extra dollar irrespective of the nominal recipient of the cash transfer. It is however possible that the cash given to the adolescent girl with the full knowledge of her parents had to be, at least in part, devolved to the parent. In addition, the authors find that increasing the value of the conditional transfer offer has no effect on the outcomes studied over and above the minimum value of the conditional transfer. So in the context of this particular experiment, where increasing the amount of the transfer did not increase the treatment effect, it is perhaps not surprising to find that the identity of the recipient of the extra dollar did not matter.

Berry (2016) compares the effect of a range of treatments – randomized across individuals – incentivizing the performance of Indian children in Grades 1 to 3 at a literacy test, varying the type of transfer (cash, voucher to buy toys, toy) and recipient (parent or child). He finds no evidence that the identity of the recipient matters on average, but sheds light on how the recipient of the performance incentive scheme may interact with the relative productivity of parents and children in producing learning.

Taken together, the findings in Bergman (2016), Bergman and Chan (2017), Berlinsky et al 2017, Bursztyn and Coffman (2012), Rogers and Feller (2018) and our own work provide compelling evidence that, across a wide range of settings, children hold private information about the effort they put into their schooling, and that this asymmetry of information can be leveraged to improve educational outcomes at comparatively low cost. More generally, our recent evidence from Mozambique suggests that children have considerable agency in their schooling decisions, and opens up possibilities to achieve better schooling outcomes – including higher test scores – through a better understanding of the role of children in investments in their own education.

Damien de Walque is Senior Economist in the Development Research Group at the World Bank.
Christine Valente is Reader in Economics in the Department of Economics at the University of Bristol