Some years ago, a government I was working with really wanted to increase the data they had on their own education system. They didn’t have great data on student attendance or teacher attendance, much less on tardiness or instruction time. They designed an information management system with swipe cards for every student and teacher to use going in and out of classrooms, all of which would feed wirelessly into the district office, allowing real-time interventions to improve education. It sounded amazing! And it fell apart before it ever began. Connectivity and many other problems reared their ugly heads, and ultimately most of the program was jettisoned. Another time, I worked with a government to use smartphone cameras to improve school monitoring by inspectors (an update of the Duflo et al. experiment). Myriad problems with the software and the hardware led to very little implementation, with (unsurprisingly) little impact on meaningful outcomes.

Merge anecdotes like those (datum + datum = data?) with meta-analytic evidence on the massive variation in results from technology-related interventions to date: Exhibit A is McEwan’s figure (below) showing results of technology-related education intervention in low- and middle-income countries. Exhibit B is Bulman and Fairlie’s 2016 review of technology and education, which reports “mixed evidence with a pattern of null results” (although they’re slightly more bullish on developing countries). It’s easy to be a technoskeptic, or at least a technorealist. 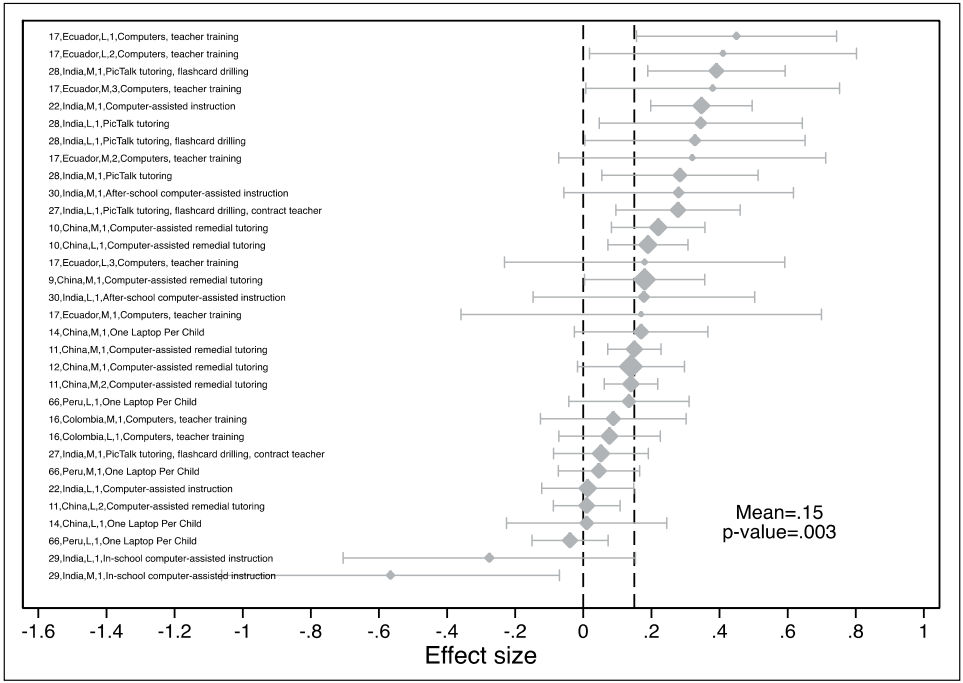 A strikingly promising result for computer-assisted learning
Into this mix, throw in a computer-assisted learning intervention that could increase math scores by 0.59 standard deviations and language scores by 0.36 standard deviations in 90 days (Muralidharan, Singh, & Ganimian 2017). For context, the 0.59 effect size is 25 percent larger than the largest effect size in the McEwan study (above), and four times higher than the average. And this isn’t just a really big effect size on the same kind of intervention (i.e., red flag on plausibility): It’s a different kind of computer-assisted learning, adapting as it goes to student learning levels. So it feeds into the already promising literature on adapting instruction to students’ actual learning levels (“Teaching at the right level”).

The intervention
The Mindspark computer-assisted learning software “is interactive and includes continuous student assessment alongside instructional games, videos, and activities from which students learn through explanations and feedback.” Here are four main features: Mindspark is rolled out in schools and in homes, but the intervention evaluated here is an after-school center, where students sign up for six 90-minute slots per week outside of school hours, at a cost of about US$3 per month. Half of each slot is computer-based instruction (with a mix of math, Hindi, and English instruction across days), and the other half includes an instructor providing homework supervision and instruction on topics of broad relevance.

The experiment
About 600 students were recruited from public middle schools in low-income neighborhoods in Delhi. They were separated into treatment and control by lottery. Treatment youth received a voucher to attend the Mindspark center for free for the course of the 4.5 month evaluation. Average attendance among lottery winners was 58 percent (about 50 days of attendance). 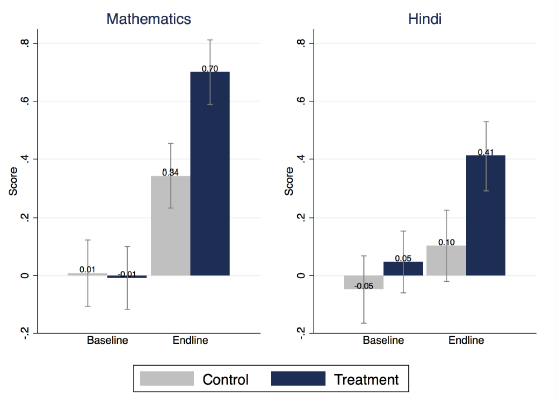 While the absolute gains were equal across gender and poverty level and baseline test scores, the relative gains for students who started with low performance are much higher, as you can see below. 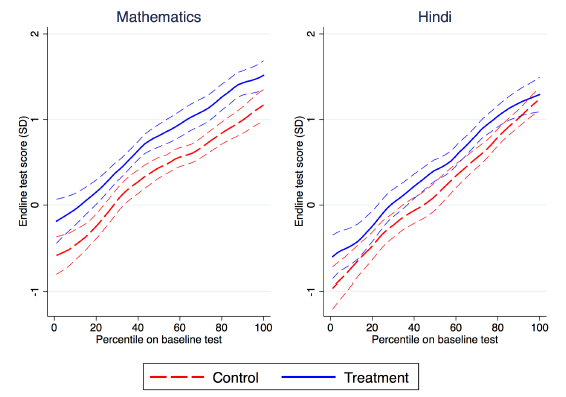 This brings me to one of the most striking "side findings" of the paper: In their regular schooling, the lowest performers at baseline are learning next to nothing. Below are the gains just among the control group (so, no Mindspark). 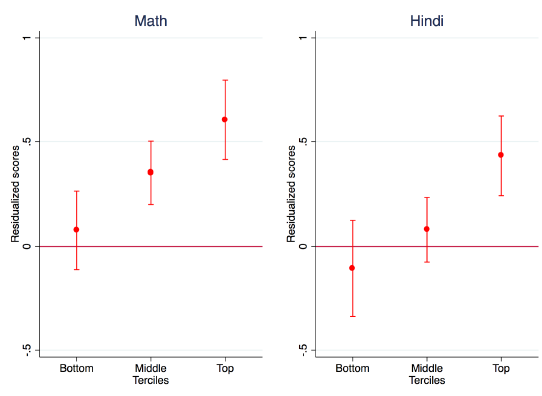 But wait, I thought the effects were even bigger!
The above results are for lottery winners (a.k.a. intent-to-treat). The authors then examine the relationship between test scores and actual attendance at the Mindspark centers, instrumenting for attendance with random assignment to a voucher (a.k.a. treatment-on-the-treated). Those estimates suggest that 90 days of attendance (the equivalent of half a school year at 80 percent attendance) would deliver 0.59 standard deviations of learning in math and 0.37 in Hindi.

Frankly, even the intent-to-treat effects are big: “The ITT effects on math were close to a full grade-level over just 4.5 months (even with only 58% attendance).”

Given that – and the fact that the fixed costs of software development are in the past – the authors do some cost-effectiveness analysis and argue that Mindspark is cheaper than “default public spending” on education.

How do we know it was the software?
After all, half the time at the center was group-based instruction. While it’s impossible to separate the effects experimentally here, the authors marshal a few arguments: First, where group-based instruction interventions have had any impacts in the past, it has tended to focus on making groups of students more homogeneous, either by focusing only on students in need of remedial work (here or here) or by re-grouping classes (here). Second, there is evidence that in fact the instruction received via the computer was highly individualized, something difficult for even the most motivated teacher to attain in a highly heterogeneous class. Lastly, the implementing agency argues that most of the time with the instructor was focused on homework completion and preparation for official school exams.

A caution
“Our results speak more broadly to the potential for new technologies to enable low-income countries to leapfrog constraints to development.” (Pssst! India isn’t a low-income country!) Even as I write about these very promising results, I have ugly visions in my head of rooms filled with computers but devoid of students. The computers have broken and there’s no budget to fix them, and the power supply was too spotty to make them consistently useful in the first place.

These results are exciting and I hope that this intervention is tested elsewhere. But in low-income, low-infrastructure environments, be realistic about what computing infrastructure is plausible. (And remember Trucano’s four cautions about education technology.)

Lessons for education research
That’s the end of the results, but the authors were kind enough to share a few thoughts on lessons for educational research, which I’ve abridged and annotated below. Bits and pieces
Topics
Education
Digital Development
Countries
India
Regions
South Asia
Series
World Development Report 2018

There is also some psychological research by Nicola Pitchford on an intervention in Malawi where students received tablet-based instruction in math ( https://doi.org/10.3389/fpsyg.2015.00485 ). The results of kids receiving the intervention are compared to a control group receiving standard instruction and a placebo group receiving non-math tablet instruction. The sample is relatively small, since the experiment took place in a single school. There are 183 kids across three grades with one treatment arm in the first and two treatment arms in the second and third grade, plus a control group in each grade, resulting in an average 38 students per treatment arm / control group.
With that caveat in mind, Pitchford finds that "the maths tablet intervention was significantly more effective at improving mathematical attainment than current instructional practice for primary school children in Malawi. [...] Results showed no advantage for the non-maths tablet intervention placebo group over the normal practice control group [...]. Furthermore, the maths [curriculum knowledge] acquired by children in [grade three] through interaction with the maths tablet intervention generalized to novel items, that were not practiced during the maths tablet intervention, and were delivered in a different, paper and pencil, format."
I'm not an expert on the methodology used (since it not standard econ stuff), and since effect sizes aren't presented in standard deviations, I find it hard to compare this to results I know from economics. (Although Pitchford notes that the "large effect sizes found in this study for the children exposed to the maths tablet intervention exceed, or are comparable to, those reported by other studies in the literature (Räsänen et al., 2009; Shin et al., 2012; Praet and Desoete, 2014) conducted with European and North American primary school children.") The program is being scaled up, so more research may be yet to come, looking at more students and more schools. But from this initial evaluation, it seems this might also turn out to be a "computer-assisted learning program that delivers learning results", and could be worth keeping an eye on.

Thanks for sharing this Max. It is indeed useful to keep an eye on programs that display the promise of improvement in student learning outcomes using technology based methods.

The results make sense from a learning science perspective. We should expect much progress, particularly in the lower-level basic skills that must be automatized. The key is to get students engaged for many hours and to have software that delivers sufficient exercises that become progressively harder.
The programs that have reported limited gains are many, but they did not look much into time use. Many times students were distracted by emails etc. So it's important to delve into the memory and information processing issues; not to focus just on results.

Thanks for sharing this Helen. I agree that it is important that children are engaged with the material and focused on tasks that create an impact on learning outcomes. Can I ask what you mean when you refer to ‘memory and information processing issues’?

You state: "The centers target low-income households, but donors require a fee under the belief that “cost-sharing is necessary to avoid wasting subsidies on those who will not value or use the product.”"
Doesn't that introduce selection bias and raise concerns about validity?