This is the third in our series of posts by PhD students on the job market.

Both economic theory and empirical evidence recognize that economic phenomena may have multiple states of equilibrium where behaviour is stable. In these situations, temporary interventions can have long run effects by making individuals switch from one equilibrium state to a different one. In policy terms, the possibility of addressing long run issues with temporary policies, rather than with permanent interventions, is appealing since it might only require transitory investments and would not necessarily be reliant on long term commitment of policy makers. Although the associated debate goes back as far as Rosenstein-Rodan (1943), the feasibility of using temporary interventions to generate such sustainable effects on individual behavior is still contentious as it lacks supporting empirical evidence. My job market paper presents a temporary intervention that had lasting impacts on households' behavior towards energy consumption.

The empirical literature shows that small interventions, such as nudges, affect individual behavior in the short run, but with limited long run effects (see

Gneezy et al. 2011 for a survey). This is consistent with standard multiple-steady-state models. On the other hand, persistent effects of major historical episodes have been observed (for example Bleakley and Lin 2012), suggesting that specific events can place otherwise identical agents in different states of equilibrium. It is therefore still an open question whether it is possible to use policy to induce long-run behavior changes. Recent field experiments designed specifically to investigate this question have reached divergent conclusions(see Kremer and Miguel 2007, Giné et al. 2010, Dupas 2012).

The main contribution of this paper is to provide empirical evidence that a temporary policy can affect long run household behavior. I examine the Brazilian electricity rationing episode of 2001 in order to test whether this induced switching between steady states in households' electricity consumption. This episode is of particular interest for the above debate because it was a large demand response program yet limited to select regions due to a combination of weather conditions and infrastructure constraints, generating a credible counterfactual.

At the start of 2001 the electricity generation capacity of some Brazilian states was severely reduced due to extremely low stream-flow level in the rivers that serve the hydroelectric powerplants in these states. Since the Brazilian electricity system is partitioned, it was not possible to reallocate electricity between regions. In order to prevent general blackouts, the government planned and implemented an emergency rationing program for the affected regions within a couple of months. In June 2001, households in the Southeast and Midwest were asked to reduce electricity consumption by 20% relative to their historical average consumption for a period of eight months. Households were subject to fines and the threat of supply interruption if they did not meet their targets, and received bonuses for additional energy saved. At the same time, the government issued a national information campaign, and introduced subsidies to energy-efficient appliances countrywide. After the end of the program in February 2002, electricity supply and prices went back to normal.

To estimate the rationing's impact on final household electricity consumption, I use a panel of average household electricity use and price by utility company, monthly from 1991 to 2011. This is administrative data from the Brazilian Electricity Regulatory Agency (ANEEL). The main empirical strategy of this paper is a difference-in-differences specification using households in the non-rationed states in the South of Brazil as a control group for the rationed households in the Southeast/Midwest. Under the assumption that households' electricity use in these regions would otherwise have followed a common trend during the period studied, the estimated regression coefficients can be interpreted as the average effect of the treatment on the treated. 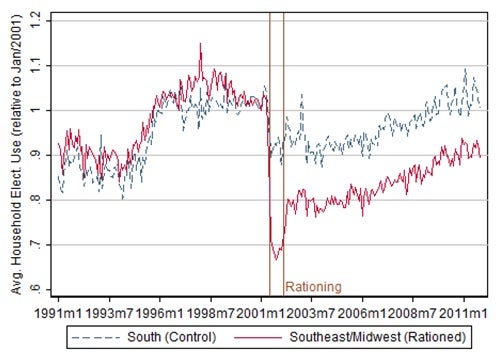 The figure above presents the monthly average household electricity consumption, relative to January 2001 levels, in the South (non-rationed) and in the Southeast/Midwest (rationed) from 1991 until the end of 2011. It is apparent that the average electricity use in the two regions followed a similar trend in the ten years before the electricity crisis. During the rationing, marked with the two vertical lines, electricity consumption fell in both regions, partially due to the national information campaign and subsidies to energy-efficient appliances. However, the rationing effect in the rationed region is captured by the relative difference between these two regions. Thus, during the rationing, the average monthly consumption of the rationed households dropped by 46 kWh/month (28%) relative to the non-rationed households. At the end of the rationing, the consumption growth in the rationed region did not offset the entire short run reduction. From 2002 until 2011, the average rationing effect on the rationed households is equal to a reduction of 25 kWh/month (14%) in average monthly electricity use. This long run effect is equivalent to replacing three 60W incandescent light bulbs by fluorescent ones, or to switching off a freezer for two weeks in every month. These results are robust to different specifications, controls and sub-samples.

This persistent change gives some evidence that households settled into a new steady state with lower consumption levels after the rationing. Two non-competing mechanisms could be underlying this long run energy conservation: households could have changed how they use electrical appliances, and/or acquired more energy efficient appliances. It is important to distinguish these two channels because they reflect different types of economic behavior and hence would have different policy interpretations. I use household level microdata to go inside the households and shed light on the channels supporting the long run reduction in electricity use.

The picture emerging from the household level microdata shows that the temporary rationing had a lasting impact on people's utilization of existing appliances, rather than increasing long run adoption of energy-efficient technology.

Even three years after the rationing, I still find evidence that rationed households use fewer freezers, and maintain the thermostats of showers with electric heating at a lower level, relative to non-rationed households. These two results by themselves could account for all of the observed long run energy conservation in the Southeast/Midwest. Also, microdata suggests that the difference in composition of appliances – quantity and vintage – between the two regions did not change substantially in the long run.

Taken together, this is evidence that households adopted new consumption behaviors during the rationing, shifting to a new stable steady state with lower electricity use. A caveat of this paper is that I cannot empirically disentangle which economic mechanisms are underlying the long run effects. For example, consumption habits could make households’ current electricity use depend on their past consumption pattern, or social norms could change household electricity use. This is crucial in order to estimate the welfare cost of the transition between states of equilibrium. In particular, if these mechanisms involve externalities or internalities of electricity use (Stern 2008; Allcott and Mullainathan 2010), then there could be aggregate welfare gains from shifting consumption to equilibria with smaller energy use.

A key difference between this episode and most of the demand response programs in the literature is that it was not a nudge, or a surgical incentive given to individuals, but a nationwide intervention. In particular, its breadth allows for general equilibrium effects to take place, as well as potential complementarity between different economic mechanisms, such as price, information, social norms, and habits (see a related discussion in Martin Ravallion's post).

The main contribution of this paper is to provide empirical evidence that a temporary demand response program appears to have promoted sustained changes in consumption behavior. The energy saved has been equivalent to 1.5 months of electricity every year, for the last 10 years, and counting.

Francisco Costa is a PhD Candidate in the Department of Economics at the London School of Economics, and a member of STICERD. His primary research interests are Environmental/Energy Economics, and Development Economics. Francisco is on the academic job market this year.

Rationed households use fewer freezer? Is this on the extensive or intensive margin? I'd think it would be rare for people to have more than one freezer, meaning this result is driven by people stopping using freezers at all. Is there any knock-on result in the amount spent on food? Theoretically, using freezers should help people save money by allowing to buy in bulk, etc.

Unfortunately, I did not investigate expenditure on food yet, I am still trying to look at this. I agree that freezer can help people stock food, but the overall saving is less clear since it depend both on the food discounts and the cost of maintaining the freezer switched on. On that, anecdotal evidence from the supermarket association suggest that the sales of frozen food dropped and the sales of raw food increased during the rationing.

Francisco, are you familiar with the paper by Francois Gerard, a grad student from Berkeley on the market this year? He has a very similar paper, studying the same incident and finding largely similar impacts using the same identification strategy. But I think he also reaches some conclusions about the mechanism underlying the change -- e.g. he shows that the response can't be explained by private incentives alone. Any thoughts on how your papers differ?

It looks like both of you have been working independently on the same thing for the past 2-3 years, as well as presenting it publicly. This is a really tricky situation for us grad students, I know. But you should be citing his paper -- it looks like it was on SSRN in June, although there may be an updated version on his website.
http://papers.ssrn.com/sol3/papers.cfm?abstract_id=2097195
https://sites.google.com/site/fransgerard/research

Good luck on the market. The project is very interesting!

Thank you for mentioning it. Me and François met in Berkeley after I presented this paper at PacDev (The Pacific Conference for Development Economics) in mid-March. It was an oversight that I didn't cite him and this will be corrected soon.

I think most people are moving towards energy efficient appliances these days. I doubt people are swithing off the freezers, they just use those with lower energy consumption. And not only freezers. When we bought new house before buying new fridge or washing machine we made our calculation: If we choose AA+ rating over A+, we will save X amount a year. It is a clear calculation.