Three strikes and they are out? Persistence and Reducing Panel Attrition among Firms

On Friday I linked to a description of the survey procedures for an opinion poll in Cuba. This contained the description “At least three attempts were made to reach the selected individual, after which interviewers moved to the next house”. This recommendation for three callbacks seems to be taken as standard in a lot of market research, but also taken as given in a lot of survey documentation I come across. For example, Gero Carletto of the LSMS team (*) informs me that they recommend a minimum of three callbacks at the most appropriate time; see also examples from RAND; from USAID; and the DHS in India. While many of these say a minimum of three callbacks, often this becomes the maximum to a contracted survey firm given the costs of going back again.

I also just finally finished and received collection of follow-up data for a business plan competition I am evaluating in Nigeria. This is a panel survey, where the experimental group is just over 1800 individuals, located all around the country. Motivated by a paper on using call attempts to form bounds in the case of attrition that I had previously blogged about, I made sure the survey company (TNS RMS Nigeria Ltd.) carefully recorded each in-person visit attempt. Then after all the visits had been conducted, we did a final phase of trying to get more responses by giving a much shorter version of the questionnaire by email, computer-aided telephone (CATI), and by sending SMS’s directing them to the web survey. This table summarizes the results: 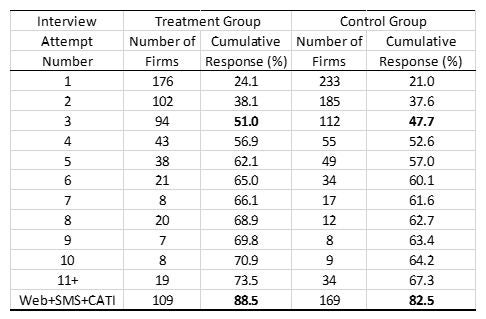 If I had contracted the survey firm on the basis of up to three callbacks, the response rate would have been 51% for the treatment group and 48% for the control group. Ultimately we managed to get this up to 89% for treatment and 83% for the control. So a few points here:
Of course lots of panel data studies do put a lot of work into reducing attrition (see for example this nice paper by Duncan Thomas and co-authors summarizing the methods and experience of the Indonesian Family Life Survey; or the intensive tracking of a subsample and then reweighting approach of the Kenya Life Panel Survey). My point here is just to i) share the experiences here of how much return there was from additional effort; and ii) remind myself and encourage you to think very carefully the next time you get a proposal from a survey firm which proposes a standard procedure of using up to three callbacks.

* I should also note that Gero emphasized the importance of when the callback is made, in addition to how many callbacks are done, stressing the need to try at times like early morning or evening, or other times when you may be more likely to find people in the home, and that the number of callback attempts then depends on the number of days they are working in an enumeration area. The callback issue is perhaps less of a concern for the initial cross-sectional survey than for panel surveys.

Thanks to DFID for funding the survey used here.

Thanks for the post and the very useful links. There is also a clever strategy using call back rates to obtain bounds on treatment effects: http://ftp.iza.org/dp6751.pdf (Behaghel et al, forthcoming RESTatr)

I got this nice anecdote by email from Joe Cummins:

Your blog post today reminded me of my favorite survey-attrition-related anecdote – I noticed a note from the US Census Bureau stuck on my neighbors door a few years ago:

Repeated attempts, moralistic nudges, vague pseudo-threats, and a seal of officialdom. I guess that is how you get near perfect response rates.