You are most likely reading this blog post on a piece of technology using a so-called conflict mineral.

Tin, tantalum, tungsten, and gold—collectively referred to as “3TG” minerals—are common inputs in popular products, such as mobile phones, laptops, medical equipment, and jewelry. The extraction of these minerals, however, serve as key sources of revenue for armed rebel groups in the Democratic Republic of Congo (DRC) and other surrounding countries. Therefore, a popular narrative suggests that the continued use and international trade of 3TG minerals mined in the DRC and surrounding countries fuels violence and conflict in the region.

Intending to break the link between consumers and armed rebel groups, the United States Government regulated the international trade of 3TG minerals mined in the DRC and surrounding countries—a total of ten countries in Central Africa. This legislation—included in the Dodd-Frank Wall Street Reform and Consumer Protection Act—requires publicly traded companies in the US to report on the presence of “conflict minerals” in their supply chain.

In my job market paper, I estimate the impact of this policy.

Estimating the impact of the Dodd-Frank Act in the DRC, while omitting the other covered countries, presents a challenge for statistical inference. The challenge arises in calculating accurate estimates of the standard errors around point estimates when there is only one treated country and many control countries. As Figure 1 shows, the variance around the trend in the probability of conflict is much larger in the DRC than in other non-covered sub-Saharan African countries. One way to test for the consequences of this challenge for statistical inference is to perform permutation tests—a procedure conceptually equivalent to randomized inference. (Note that in principle the synthetic control method is useful in these sorts of cases; however, my preferred estimates use difference-in-differences regressions so to take advantage of the rich sub-national detail of the ACLED data. The synthetic control results, shown in the paper’s appendix, are qualitatively consistent.) 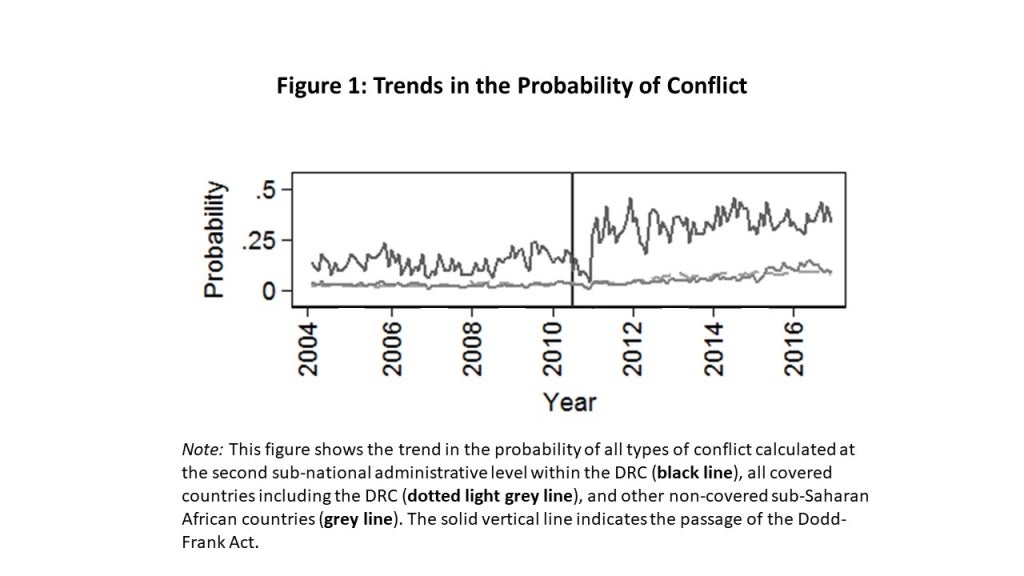 Figure 2 highlights the results from these permutation tests by plotting the frequency of placebo estimates from permutation tests. In this procedure, I test whether effects within the DRC are systematically more extreme than in countries we would expect no effect. The vertical dashed lines are the 5th and 95th percent percentiles on the distribution of placebo estimates. These placebo estimates represent the estimated effect of the passage of the Dodd-Frank Act on the prevalence of conflict in other sub-Saharan African countries not included in the legislation. The vertical solid line represents the effect of the Dodd-Frank Act in the DRC. This estimate is relatively large—implying roughly a doubling of the prevalence of conflict—and is an outlier on the distribution of placebo estimates. This finding qualitatively persists for specific types of conflict events, such as violence against civilians, rebel group battles, riots and protests, and deadly conflict. 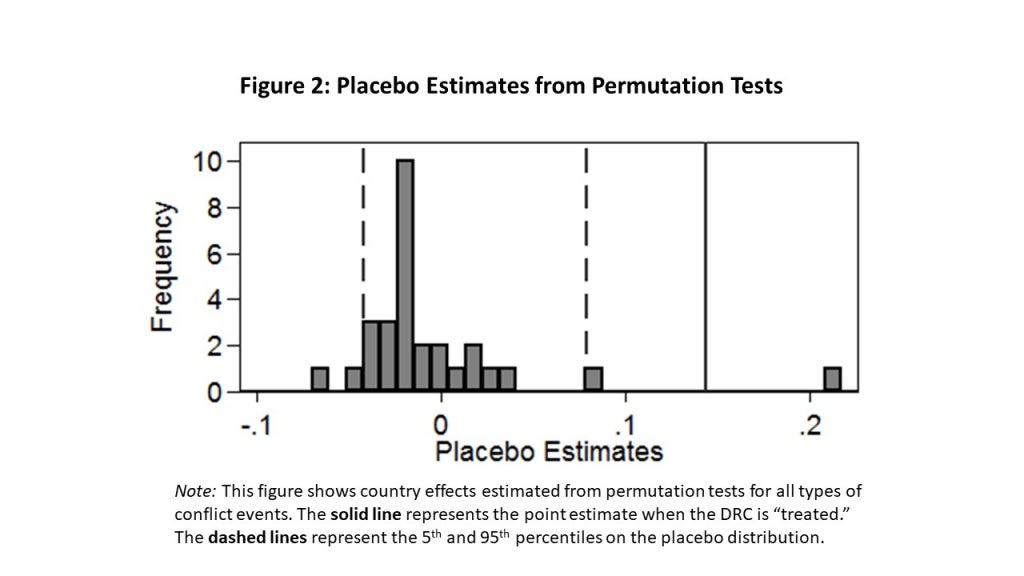 The analysis in my paper aims to build on this previous work by estimating effects that are less likely to be biased by spillovers. If conflict spreads within countries, rather than remaining isolated within specific local administrative areas, then these previous quantitative estimates may underestimate the effect of the Dodd-Frank Act in the DRC. Consistent with the idea that spillovers may be present in this context, I find that that the unintended consequences of the Dodd-Frank Act on conflict in the DRC are considerably more dramatic than previously reported.

What Went Wrong? An (Incomplete) Theory of Change

The core idea behind the theory of change of the US “conflict minerals” legislation is that revenue earned from the extraction of 3TG minerals cause conflict. Although this stylized relationship could persist, conflict is also caused by a complex combination of socio-economic inequality, poverty, land use, political corruption, social frustrations, among other things. Importantly, each of these factors may be influenced by the passage of the Dodd-Frank Act.

Examining some of these potential mechanisms I use data on mining site visits within the DRC, collected by the International Peace Information Service (IPIS). These data include information on the timing of the visit to specific mining sites over time, the number of workers employed, and the presence of an armed group at the mine. This information allows for a preliminary investigation of why the Dodd-Frank Act led to the direct opposite of the intended effect.

Difference-in-difference estimates from this analysis suggest that although the passage of the Dodd-Frank Act may have led to a weak reduction in the likelihood of the presence of an armed group at targeted mines, the number of workers employed at targeted mineral mines also decreased by about 50 percent. The prevalence of conflict in the DRC could increase as employment opportunities decrease. These results tell a story of an incomplete theory of change motivating US “conflict mineral” policy.

Now What? Reducing Conflict in a Globalized World

Most recently—in April 2017—the United States Government suspended enforcement of this policy. This action followed an attempt to overhaul the entire Dodd-Frank Act which was ultimately dismissed by the US Senate. Some speculate that this enforcement suspension may reverse the unintended consequences of the legislation. Unfortunately, supplemental analysis in my paper suggests that the suspension of enforcement of the “conflict minerals” legislation has had essentially no effect on the prevalence of conflict in the DRC.

One potential reason for this null effect of the enforcement suspension is that some companies—such as Apple, Intel, and Tiffany & Co.—have publicly stated that they intend to follow requirements of the legislation even if it is officially removed from US law. This implies that some companies perceive a market expectation for “conflict free” products and presents challenges for the future.

Many readers likely support the transparency of the international trade of natural resources. Coupled with the existing literature, my analysis suggests that although transparent trade across national borders is prima facie beneficial, policymakers, citizens, and consumers must be aware of the potential unintended consequences of economic regulations aimed at cutting access to resources in the most impoverished areas of the world, where deep social and political challenges exist.