This is the fifteenth in this year's series of  posts by students on the job market.

Job search costs are high in rural labor markets in developing countries. Most farmers do not have access to the internet and there are no online job markets for agricultural daily laborers. There is rarely a central place where workers are gathered. As a consequence, the flow of information on jobs and wages is imperfect. Figure 1 presents the deviation of reported daily wages from the village/season-specific average. Relative to the mean wage of $3.11, there exists substantial within-village wage dispersion in rural labor markets in Tanzania, which is surprising given that casual agricultural labor typically does not require special skills. In my job market paper, I study the effect of reducing search frictions on wage dispersion through a field experiment in Tanzania. To reduce job search costs, I develop an SMS-based messaging app that connects agricultural workers and employers. The app was designed to mimic an online job portal like Monster.com, except that ads are announced over feature phones without relying on internet access. As shown in Figure 2, employers post a job ad by answering a few questions via SMS and the ad is sent to all registered workers in the village. 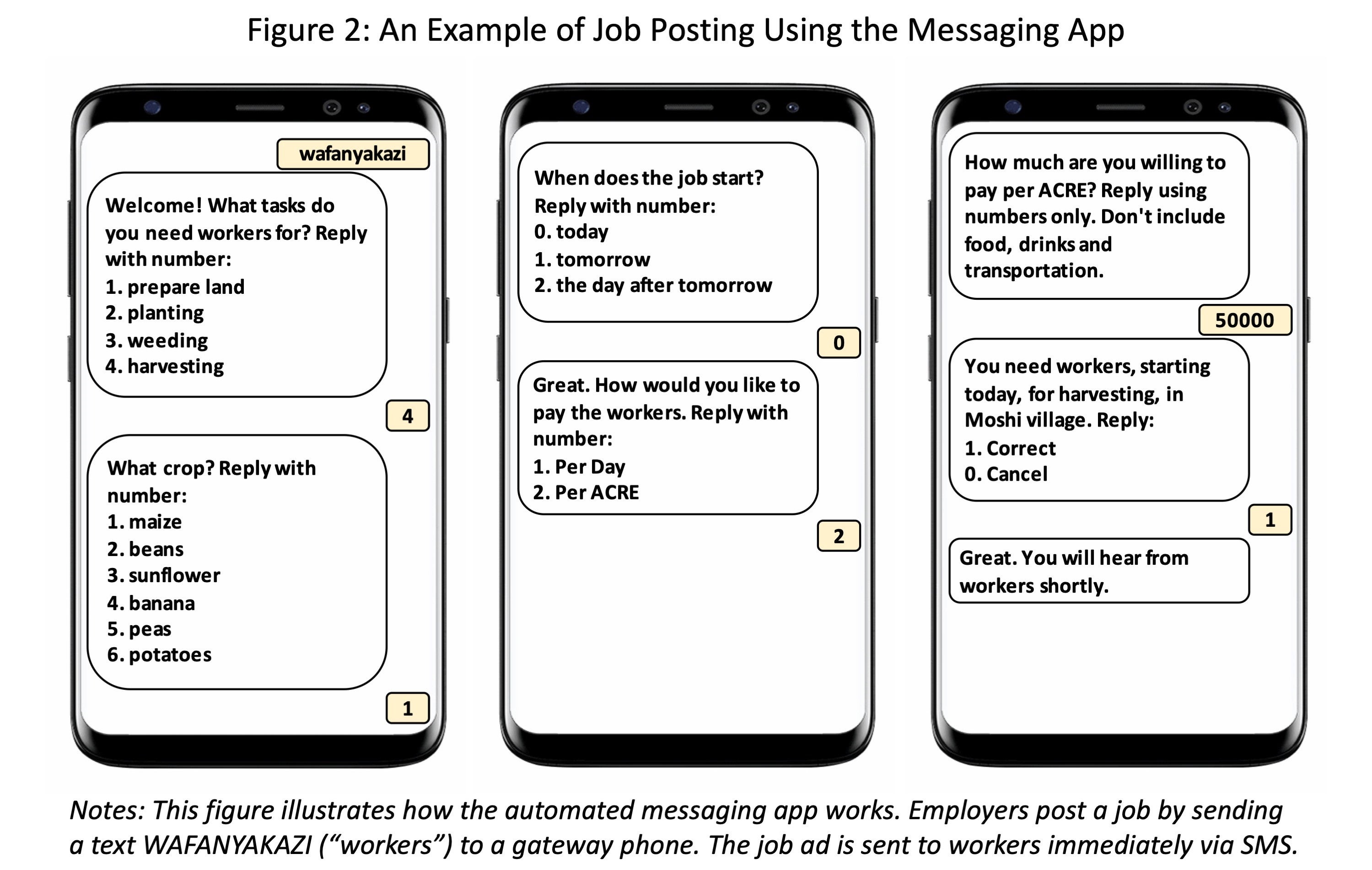 Once a worker replies to the job ad, the worker's information is instantly sent back to the employer who initiated the request. This service effectively connects all employers and workers at near-zero user cost, increasing the size of rural labor markets. The treatment was randomized at the village level because labor markets are formed closely within the village boundary. The recruitment of employers and workers was done through village meetings right before the 2019 planting season. Treatment villages (N=40) were offered to use the app service throughout the 2019 agricultural season, while control villages (N=30) received nothing.

Figure 3 shows the deviation of daily wages reported by employers from the village/season-specific average wage. The left-hand panel shows that wage dispersion is balanced between control and treatment villages before the intervention. The right-hand panel clearly shows that wage is compressed toward the village average after the intervention. As one measure of dispersion, the within-village mean-minimum wage ratio at baseline is 1.8 in the control group, implying that the wage of an average worker in a village is 80% higher than the lowest-paid worker in the same village. I find that the mean-minimum wage ratio decreases to 1.45 in the treatment group (i.e., a 19 percent reduction). 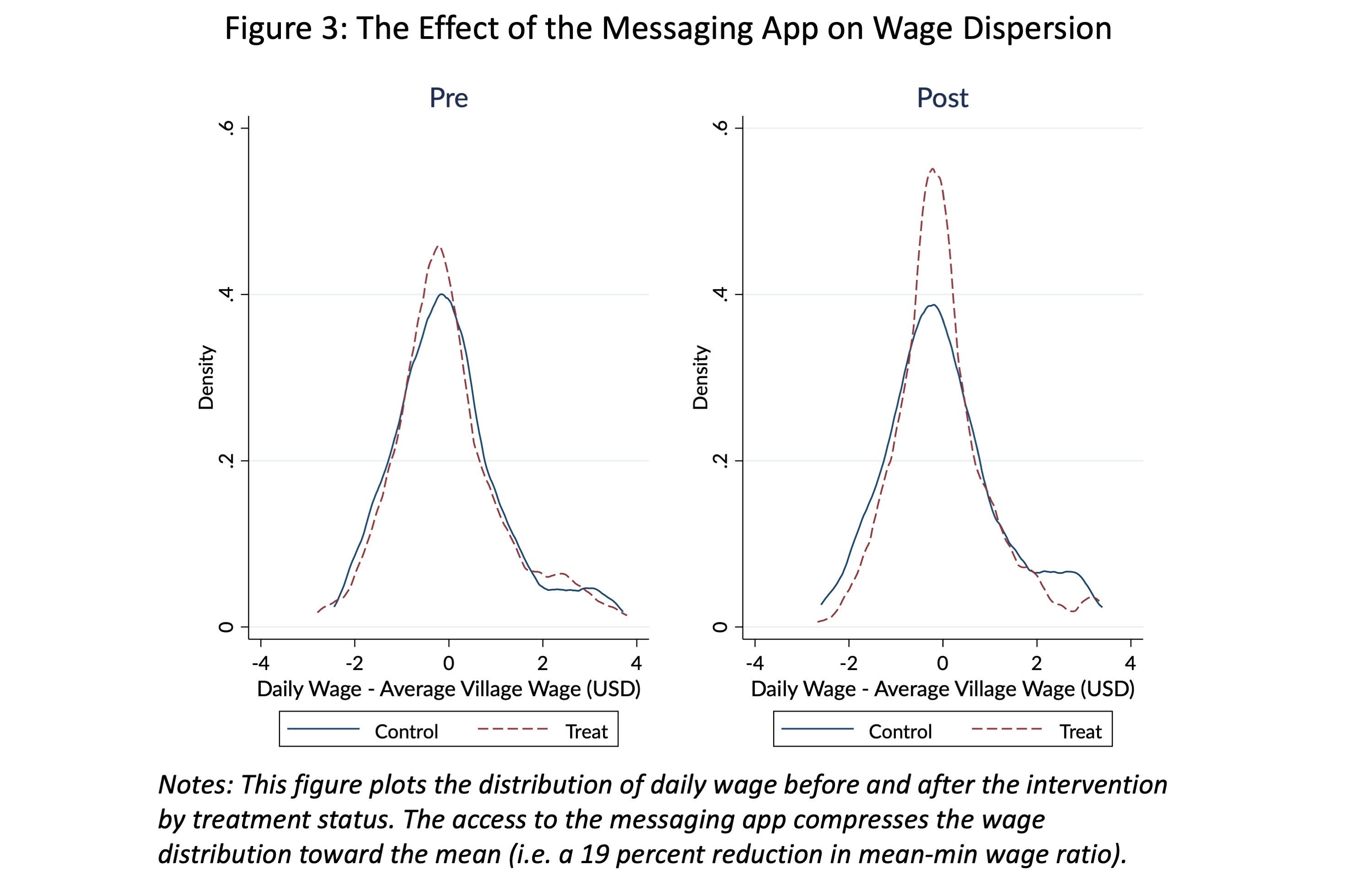 This finding is an important addition to the labor search literature. Existing work based on search-theoretic models has found mixed empirical results. Depending on whether on-the-job search and/or worker sorting are incorporated in the models, some studies show that frictions explain a large fraction of observed wage dispersion (Postel-Vinay and Robin 2002; Ortego-Marti 2016), while others find that frictions explain little (Hornstein et al. 2011; Bagger and Lentz 2018). I offer the first microeconomic evidence on the role of search frictions on wage dispersion in a well-identified experiment. My results support the idea that search friction accounts for a sizable variation in wage dispersion, notably in a rural market setting where heterogeneity in jobs and workers is expected to be small.

Interpretation of the Treatment: What Is the Mechanism Behind the Wage Compression?

A primary effect of the treatment is to reduce search costs in villages. Another element of the app is that it asks employers (workers) to specify the wage they would like to pay (get paid) to facilitate the transactions. This bidding feature could potentially affect the way participants bargain over wages, for example by encouraging participants to signal their reservation wages more effectively. Second, the wage information in the job ads and job applications might help market participants to better update their beliefs on prevailing market wages.

I isolate the channel of search frictions from the potential change in bargaining behavior and explicit wage signaling by randomizing the disclosure of wage information. In a random subset of treatment villages (N=30), I remove the wage information from job ads and/or job applications.

I find no evidence that the wage disclosure feature has any impact on wage compression, suggesting that the mechanism is likely due to the reduction in search frictions. I find modest evidence that supports this mechanism. The treatment induces initially high-paying employers to increase the probability of hiring new workers whom they had not hired previously. Those employers also face an increased number of applicants per vacancy relative to lower-paying employers, suggesting that workers divert their job applications from lower-paying to higher-paying employers.

I also look at output and consumption levels. Harvest data is noisy and the treatment effect is not distinguishable from zero. On the other hand, I find that treatment farmers are less likely to skip a meal due to food shortage. The proportion of households who skipped a meal in the past six months decreases by 3.4 percentage points in the treatment group (on a base of 7.5 percent in the control group). One explanation might be that the app enables workers in poverty to find a job more easily and to cope with food shortage.

Scaling up the Job Search App

The use of digital technology in African agriculture is becoming increasingly common with an ambitious aim to improve agricultural productivity and farmers' welfare (Fabregas, Kremer, and Schilbach 2019). For example, many companies offer frequent updates on weather and market prices and provide tips on farming and financial management via SMS (e.g., Farmerline, iShamba, MFarm, and WeFarm).

The job search app I developed is a good example of this trend. Feedback survey from app users suggests that there is scope for the profitability of this service. Among the app users, 93 percent indicated that the app service was useful. Most of them reported that they were able to find workers and jobs faster and it required less effort and lower costs. Furthermore, 74 percent of those who plan to use the app in the next season are willing to pay an average of 1.5 USD per season. With the annual maintenance cost of $950, this implies that 630 users are enough to fully cover the cost of the service.

The low cost of serving a large number of users suggests a huge potential for scaling this up to transform rural labor markets in Africa.

Dahyeon Jeong is a Ph.D. candidate in Economics at the University of California, Santa Cruz. More details about his research can be found on his webpage.